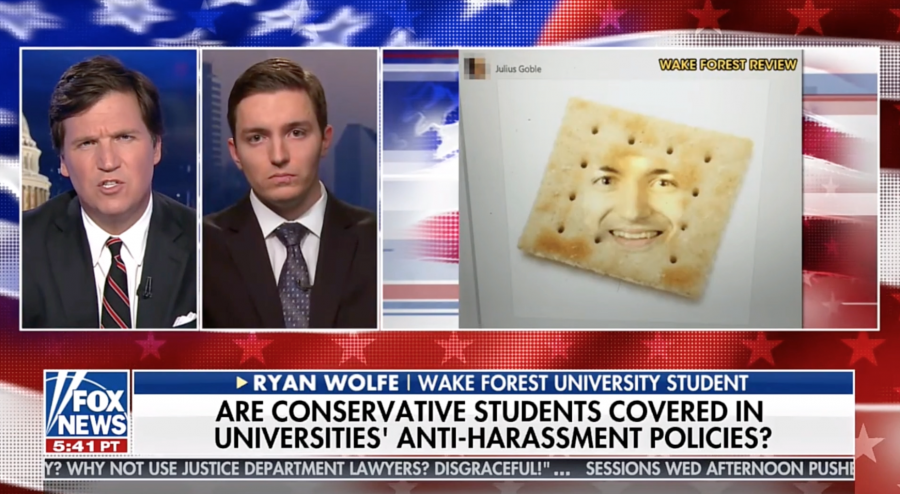 On Wednesday, Feb. 28, senior Ryan Wolfe appeared on Fox News’ “Tucker Carlson Tonight” to speak about Wake Forest’s response to a bias incident report he submitted regarding perceived harassment he was facing by his peers. On the show, he claimed that the university’s perceived lack of effective action in response to his report exemplified that the university’s policies against bias are not enforced equally for all students.

Wolfe submitted the report a year and a half ago in the fall of 2016, against a group of students who he claims violated the Code of Conduct and harassed him for his race and political views. Wolfe was upset with the way the university handled the situation. The story broke following an article published by The Wake Forest Review on Monday, Feb. 26, and has since garnered national attention.

The article, titled “Wake Forest Declines to Enforce Harassment Policies for Conservative Student,” has been picked up by several online conservative media platforms. Various publications include The Daily Caller, College Fix, Truth Revolt and Drudge Report, many of them reinforcing The Review’s claim that Wolfe’s experience exemplifies the university’s inconsistent approach to bias incident reports, and can be generalized to reflect the experiences of many conservative students on what they consider liberal college campuses.

Wolfe filed the incident report in question after an encounter he had with fellow students at a panel discussion titled “The Future of the GOP,” held on Oct. 26, 2016. The event was hosted at the Wake the Vote hub and was sponsored by College Republicans — of which Wolfe was president at the time — The Wake Forest Review and Wake the Vote.

All four students speaking on the panel were white, something many attendees found issue with. In response to a photo posted on Facebook of the four panelists, junior Char Van Schenck commented “loving the lineup” with a photo of four Saltine crackers. As this gained more attention on Twitter, Wolfe responded to a related tweet by junior Brianna Reddick, saying, “Your mentions aren’t a safe space and neither is this panel. See you there.” Reddick responded: “if you don’t GET your mayonnaise monster looking asss OUT my mentions.”

Van Schenck, along with several other students, later attended the event after learning about the all-white speaker lineup.

“The intention was to go to the panel and ask questions to show the shortsightedness and ignorance of The Review,” junior David Ajamy said.

Other students that were involved with attending the panel, but who did not participate in handing Wolfe the crackers, were contacted as a result of the Bias Reporting System investigation. Richard Caban Cubero (‘17) was a senior at the time.

“I was a concerned student who attended the event with fellow queer and black and brown students, because we were concerned about the line up being completely white,” Caban Cubero said.

Throughout the question and answer session, only four crowd members were allowed to speak, the last of which was Van Schenck, who asked why the entire panel was white. Following the panel discussion, Reddick approached Wolfe and handed him a box of Saltine crackers. She then posted a photo of this on Twitter with the caption, “Today, I handed the saltiest Republican a box of Saltine crackers.”

Although Wolfe had seen Van Schenck’s comment about Saltine crackers on Facebook prior to this and had responded to a related tweet by Reddick, he “knew that something like that would not be tolerated if a similar thing had happened to someone of any other race here.” Wolfe also called the incident after the panel event “next-level” and “more personal” than what had been circulating online.

When the Anna Julia Cooper Center Director, Melissa Harris-Perry, and the Executive Director of the Pro Humanitate Institute, Marianne Magjuka, heard about the incident, they encouraged Wolfe to file a bias incident report with the university. A few days later, Wolfe received screenshots of a GroupMe conversation in which his face photoshopped onto a cracker had circulated further. He added this to the bias report, and met with Dean of Students Adam Goldstein a few weeks later on Nov. 9 — the day after President Trump’s election.

Goldstein told Wolfe that he had three options: to file a “no contact” order, to try and mediate, or to bring in a judicial case against the students involved. Wolfe decided to file a “no contact” order request against Ajamy and then-senior Madeline Coffey (‘17), to request mediation with Caban Cubero and Van Schenck, and to request a judicial case against Reddick and then-sophomore Julius Goble. Neither Coffey nor Ajamy were made aware of the request for a no contact order, as the university declined to issue them. Coffey was out of town the day of the panel discussion.

“If we had it my way we would just abide by the First Amendment and we wouldn’t have all these rules,” Wolfe said. “But if we’re going to have these strict rules and this Bias Reporting System, then everyone needs to be held accountable in the exact same way … regardless of your identity, regardless of your politics, regardless of national political events.”

A few weeks passed and Dean Goldstein, along with Director of the LGBTQ Center Angela Mazaris, had a 2.5 hour discussion with some of the students involved, not including Wolfe. The students spoke with administrators about keeping actions respectful and were asked to reflect on how they had responded to Wolfe’s political views.

“The bias response team had determined that our jokes were not sufficient to justify a restraining order or juridical action because they could not point to any actual violence that we had justified toward Ryan Wolfe,” Van Schenck said.

Wolfe spoke with Goldstein to ask if any further action had been taken beyond the discussion with the students.

“I was told, in many words, by Adam Goldstein that President Trump’s election somehow justified their behavior even though the incident happened before [the election], and if I brought a judicial case it would be worse for me,” Wolfe said during his appearance on Fox News.

Because it was nearing the end of the fall semester, Wolfe chose to drop the issue, even though he disagreed with Bias Reporting Committee’s response to his complaints. When asked why he waited until a year and a half later to share his experience, Wolfe noted that he feared pursuing the issue would have reflected negatively on College Republicans, as his role as their president required he have a working relationship with Goldstein. He also cited fear of retribution from the university, whereas now he is a senior about to graduate.

“Looking back 1.5 years later, I agree with the committee that my actions were juvenile,” Van Schenck said. “However, they were not violent, especially not in a way that put Ryan in any danger. As such, the conversation was enough to get me to realize the error of my ways without over-punishing me.”

As a result of The Review’s article going viral, Van Schenck has been the recipient of targeted backlash online.

“With the maturity and experience I’ve gained, I would not have published the single joke that I made on Facebook,” Van Schenck said. “However, I don’t think that this should be the center of conversation. The fact that my name and face has been circulating around far-right, neo-Nazi circles of Twitter and Reddit is unacceptable.”

Reddick has deleted the Twitter account on which she posted the photo of herself handing Wolfe the box of crackers. She did not respond to the Old Gold & Black’s request for comment.

While Caban Cubero was not directly involved in the incidents mentioned, they do not think that the actions were wrong.

“Had I participated in the act, I would’ve defended the handing of the cracker box, because drawing attention to the lack of racial diversity on the panel does not equate the the dangerous actions Ryan Wolfe and other students at the predominantly-white Wake Forest Review took to alienate and attack marginalized communities on Wake Forest’s campus,” Caban Cubero said, referring to various articles published by The Review on topics such as bias, immigration and race.

The day before the election, Wolfe and Caban Cubero, then unaware of the report, met to have an informal conversation on politics and views in general.

“We connected on a variety of issues and had really great conversation,” Caban Cubero said.

“It went well and we found common ground. It was essentially a mediation without a mediator. I thought and think they are a reasonable person,” Wolfe said. Wolfe has also been working in collaboration this semester with Van Schenck for an unrelated event, for whom he had submitted the other mediation request.

“I do not, by any standard, hate Ryan Wolfe as a person,” Van Schenck said. “I think that his politics are terrible, and the article published on his behalf by Anthony Palumbo has done real violence to students of color and LGBTQ students on campus. But this won’t prevent me from engaging in constructive dialogue with him or any member of the Right on campus.”

At the time of this series of events, tensions on campus were high, specifically within political groups such as Wake the Vote. Ajamy, who had been in Wake the Vote with Wolfe since his freshman year, said that the incidents involving Wolfe, specifically the photoshop meme, were “a joke, but nonetheless a mean joke.”

In a statement, Executive Director of News and Communications Katie Neal wrote of Wolfe’s comments on Carlson, “We can say that the narrative oversimplifies a complex situation that took place 16 months ago in the heat of a polarizing national election.”

“I think many of Ryan’s views and the Review’s views are dangerous, and devalue identities on campus by telling people that they don’t belong,” Ajamy said. “[Many students] saw [Wolfe] as the epitome of The Review, of the right, and Ryan puts himself out there.”

Of the circulation online, Wolfe said, “It’s strange to have this social media mob be created and start coming at you, but not surprising in the sense that, in Wake the Vote, I was by far the most outspoken conservative student. I knew that some people in the group were not a fan of my politics, and by extension me.”

Ajamy said that Wolfe was not on a friendly basis with many because of his outspoken political views, and said that having heated discourse was not uncommon between members of Wake the Vote.

“The arguments, while not always the most progressive in getting beyond the political climate, were important for us to express our emotions and be open with each other; it brought us together as a cohort and helped us to understand the political climate of America,” Ajamy said. “I don’t think making a meme out of him is productive. Giving him a box of crackers is ridiculous. It’s all kinda stupid and childish.”

Goldstein and Goble did not respond to a request for comment.