Sexual Assault Reckoning Has Yet to Come at Wake Forest 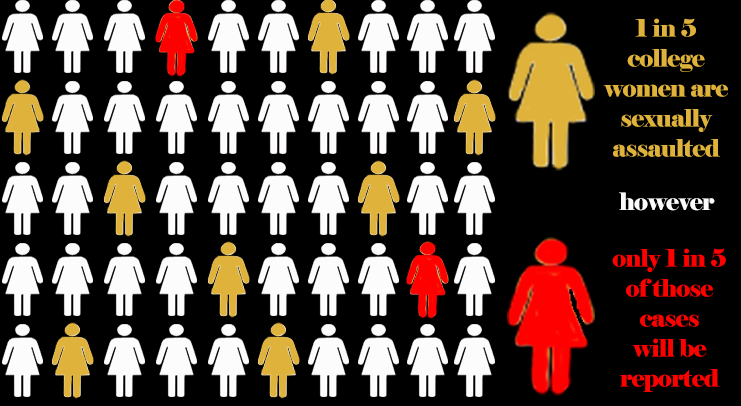 On a regular February morning in 2014, Elizabeth Kuehn didn’t wake up to her alarm.

Instead, she woke up to something alarming — a male student raping her.

Afterwards, Kuehn, then a sophomore, knew what happened but couldn’t process it. She didn’t cry for two weeks. She blamed herself for months. She constantly worried about taking action against her rapist, wondering if she could prevent him from doing it again.

In the four years that have passed, Kuehn fought to take back control and to heal.

Despite her accomplishments, the #MeToo movement caused Kuehn so much discomfort that she originally did not want to speak out.

When a man tried to grab her underwear through her dress in a bar, Kuehn decided her time had come. She recently published an online article, “Time for Me to Say #MeToo,” about the mental process behind her recovery.

The #MeToo movement gained traction in October when, in the wake of scandals such as the Harvey Weinstein accusations, actress Alyssa Milano encouraged her Twitter followers to post their experiences of sexual misconduct online or to simply respond with #MeToo, assuring other survivors that they are not alone.

While #MeToo has empowered many people to come forward with their stories, the high frequency of sexual assault on college campuses, including Wake Forest, remains unseen. The Bureau of Justice Statistics reported that 80 percent of sexual assaults committed against college women go unreported.

“We have no reason to believe that the Wake Forest campus is any different,” said Tanya Jachimiak, the Title IX coordinator. “We do know that the number of reports that we receive do not capture all of the survivors out there.”

There are many factors, both social and personal, that affect a student’s decision to report sexual violence. According to Steph Trilling, assistant director of the Safe Office, these can range from fear of not being believed to worries about consequences.

“Many students say that after an experience of sexual misconduct they just want things to go back to normal,” Trilling said. “Participating in a reporting process can remind them of their experience, which may contribute to further emotional distress.”

In May, Kuehn wanted to report with the school, but as her rapist had graduated, she would have had to press official legal charges. After talking with a criminal defense lawyer who told her that she had a strong case, Kuehn weighed her options. In the end, she made the right decision for herself: to not press charges.

“I thought it would hinder my healing process to have to go through that,” Kuehn said.

Exactly how many collegiate cases exist is hard to discern due to the lack of reporting. A poll by The Washington Post reported that 1 in 5 collegiate women are sexually violated.

Juniors Katy Marget and Emily Walton believe there is a high prevalence of sexual misconduct on campus. Together, they run an online blog, titled ‘End the Silence, Wake Forest,’ which publishes anonymous submissions from Wake Forest students in an effort to raise awareness about sexual violence.

On average, they receive three to four submissions per semester of direct stories about experiences of sexual misconduct in addition to the many that express support of survivors.

Marget believes that the anonymity gives more power to the stories than it might take away in how it exemplifies the prevalence of sexual misconduct.

After publishing her article, Kuehn received responses from 14 current and former Wake Forest students — many of whom she didn’t know — who shared with her their similar experiences. In the era of #MeToo, Kuehn hopes that the stigma of sexual misconduct will dissipate.

“It shouldn’t be that scary for me to tell people that I was raped because I didn’t do anything wrong,” Kuehn said. “What am I so afraid of?”