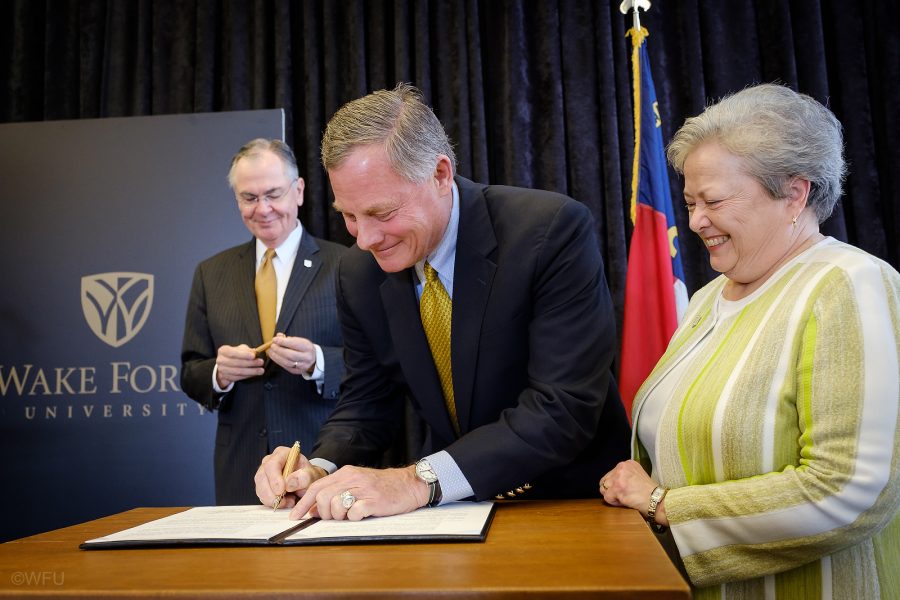 On Monday, March 12, U.S. Senator Richard Burr (‘78) announced that he will be donating a collection of memorabilia associated with his career to the Special Collections room of Z. Smith Reynolds Library.

A former Demon Deacon himself, Burr is currently serving his third term as U.S. Senator for North Carolina, before which he served in the House of Representatives for 10 years. Throughout his 24 years as a public servant, Burr has gathered an extensive collection of documents, manuscripts and other primary source material, which he hopes Wake Forest students will be able to learn from in the future.

“I hope that once I retire and all my papers are collected here, this will present an opportunity for all students and others who are interested in public policy and government service to learn more about the issues faced during my tenure,” Burr said.

The donation will be the 6th congressional collection housed in the library, following those of Donna Edwards, Charles Orville Whitley and Horace Robinson Kornegay, among others. Burr is one of seven Wake  Forest alumni to have been a U.S. Senator and one of 11 to have been in Congress.

“Senator Burr has offered, and Wake Forest has accepted, a collection that includes photographs, sound and video recordings, manuscripts, letters, speeches, notes and handwritten documents of these more than two remarkable decades in the House of Representatives and U.S. Senate,” Provost Rogan Kersh said at the event.

The collection is currently housed in storage at the Smithsonian, and the timeline is indefinite as to when it will be available at ZSR Library.

In front of the audience, President Nathan Hatch and Burr signed the official agreement between the university and the Senator with specially-crafted pens made of the wood from old shelves of the ZSR Library.

“From these documents, students will read about situations that demanded leadership, collaboration, patience and wisdom,” Hatch said. “They will learn from circumstances they have not yet seen or anticipated. They will see first hand the kind of work that engages high level law making in our land.”

The ceremony was attended by many notable figures, including Congressman Mark Walker, Hatch, Kersh and Board of Trustees Chair Donna Boswell, as well as the chancellors of both Winston-Salem State University and the University of North Carolina School of the Arts.

“This gift is a mark of leadership by one of our own community, for our community,” Edwards said. “Contributions such as this expose our students to a part of our democracy they might not otherwise get to see.”

The ceremony also included an announcement that the university will establish a Richard Burr Center in partnership with the library. The center will make a strong effort to bring nationally-recognized speakers to campus in the future. Specifics have yet to be disclosed.

“It is our shared hope that we can focus our energies on building a better understanding of the legislative process, how it works and how our young people can use that for our own leadership capacity,” Hatch said. “I look forward to using our collective efforts to establish a world class resource for our students that also honors our distinguished alumnus and public servants.”

Burr, a Winston-Salem native, went to Richard J. Reynolds High School and graduated from Wake Forest University with a B.A. in Communications. He lettered for the Demon Deacon’s football team his freshman and sophomore years, and was a member of the Kappa Sigma fraternity. He currently chairs the Senate Intelligence Committee and has stated that he does not plan to run for a fourth term in the Senate.

“My responsibility to my home of Wake Forest University is not to influence the direction a student goes, but to provide a clear pathway from which to learn how to make their mark on life,” Burr said. “We’re not in the business of influencing, we’re in the business of inspiring … The donations of my paper will only be the beginning of my partnership with Wake Forest in this regard.”