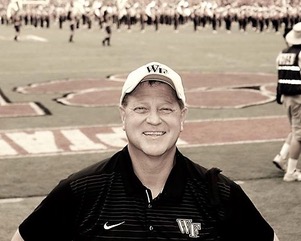 However, Shore isn’t even paid for his photography and struggles to keep clients during the summer months, so why does he do it?

During an initial interview, Shore said hello to at least a dozen people passing by. They seemed just as excited to see him as he was to see them. Shore’s dedication to the Wake Forest community is what makes him so well-known across campus.

Shore has worked in the Wake Forest Barber Shop for 12 years. He cuts for an average of 15 students per day, for $16 a cut.

The Barber Shop is one of the few places on Wake Forest’s campus that is a common denominator for the community. Students can come in and end up sitting next to President Hatch, Coach Clawson, a custodian or any other student they have yet to meet.

“There are not many places on this campus where I can actually see these people come together in one place.” Shore said. “When people come to Wake Forest and see that barber shop, they see that it is more than just a campus. It is a community.”

During the second interview, two of Shore’s clients, who didn’t seem as if they had even ever met, were talking, laughing and sharing stories with Shore. In fact, online reviews of the Barber Shop say that 10 minutes in those old-style, traditional barber chairs will have you filled in on the most recent campus news.

“It is more than a haircut. We build friendships and we care about our customers” Shore said.

Being a barber had always been in the back of his mind. His grandfather was a barber, his uncle a barber and his mother a beautician. What many people do not know, though, is that before coming to Wake Forest, Shore worked as a youth minister for 23 years.

It wasn’t until his mother, Doris Williams, began to get sick and moved in with Shore that he he made the decision to attend barber school in Winston-Salem. Not a lot has changed for Shore since moving on to his new career. He is still working with students, but just in a different way.

Aside from the Barber Shop, Shore is also commonly known for his photography. At every football, basketball, baseball or any other sports game you can think of, you can find Shore snapping pictures of students tailgating, teammates chatting on the bench, or crowds screaming at whatever is happening on the field.

“The parents love me because I can do what they can’t do,” Shore said. “They aren’t here all the time, but they want to see photos of you guys. They tell me all the time it gives them a chance to see into [student] lives.”

He has had a passion for photography since high school. When he came to Wake Forest, he began photographing some of his clients from the Barber Shop. Next thing he knew, Shore would turn around to see multiple groups posing for a picture.

“Ten years later people can look back at my photographs and remember the best four years of their lives. It is a privilege for me to be a part of that,” Shore said.

During the summertime when students leave campus, Shore and Lloyd Howard, the other campus barber, lose a quarter of their business at the barber shop, forcing Shore to take up other jobs.

When seniors living off campus come back in the fall and decide to live off campus, many of them go elsewhere for a haircut. However, these obstacles do not stop Dean from doing what he loves because, for him, it is not about the money.

“We don’t see our customers as just dollar signs. We try to do the best we can because we care,” Shore said.

When interviewing Shore in the Barber Shop, I looked around to see the walls covered with his own photography. In fact, he couldn’t even think of any photographs that weren’t his.

These photographs mean more to him than just pictures on a wall. They represent the countless memories he has made with each client, each football player, and all the students that keep him coming back every day, to do what he loves.