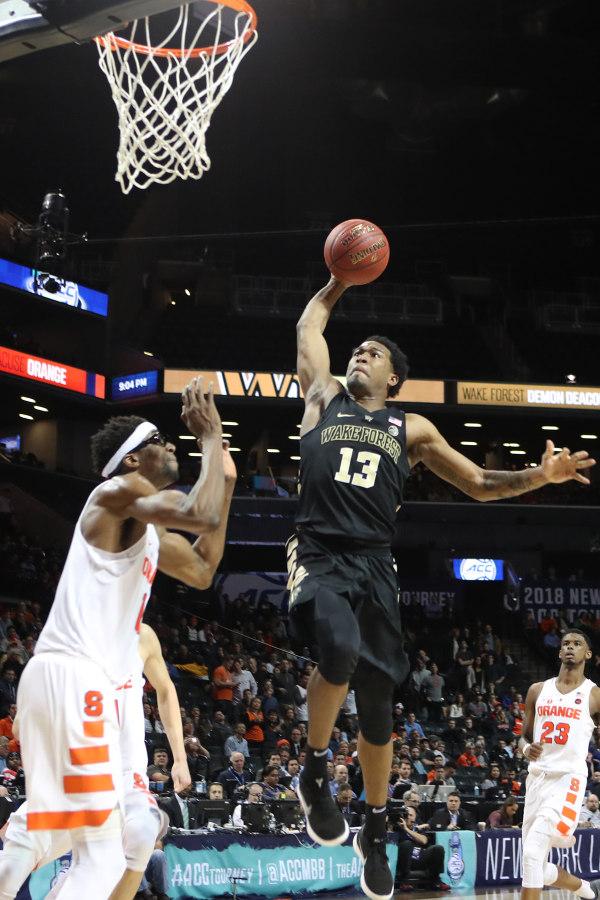 “They came out with more energy than us,” said junior Doral Moore following Wake Forest’s 73-64 loss to Syracuse in the first round of the ACC Tournament. “We just weren’t prepared and we did a poor job of rebounding.”

Moore’s words perhaps best summarized Wake Forest’s final outing of the season but arguably defined the season as a whole — one elucidated by inconsistent efforts and late-game collapses. The realization that the 11-win season would be coming to a close seemingly became a reality just eight minutes into the game as the Deacs had scored just four points and faced a 16-point deficit at the time. Despite the poor start, the Deacs did battle back, however, cutting the halftime deficit to a respectable six points.

The second half had a similar script. Wake Forest fell into another hole and somehow managed to fight back, only to come up short. Wake Forest found itself down by 19 with less than eight minutes remaining but shaved the deficit to six — just as it did in the first half — following two free throws by Brandon Childress with 1:24 left.

Syracuse responded immediately, however, as freshman forward Marek Dolezaj assisted on an alley-oop to the 7-foot-2 Paschal Chukwu, followed closely by a play on the defensive end to send the Orange to the charity stripe to put the game out of reach.

“Knowing that, initially we should have done something, had more fight starting the game and starting the second half.”

Bryant Crawford echoed similar sentiments after the game.”We came out flat,” Crawford said. “They came out with way more energy than us.” Wake Forest has a rich basketball tradition, but success in the ACC Tournament has been an obstacle for the program in recent years.

Since the passing of the late Skip Prosser the Deacs have just two wins in the Tournament, thus hardly making the early exit last Tuesday afternoon a surprise to anyone familiar with the program.

As Coach Manning prepares for the offseason, it will be interesting to see how the team looks come October. With the departures of Rich Washington, Sam Japhet-Mathias and, most recently, Donovan Mitchell, at least two scholarships have become available to individuals perhaps unknown to the program at this point.

Manning will most likely use at least one of these available scholarships on a graduate transfer, as he has done in the past two seasons, and could also look to add a late addition to the 2018 recruiting class.

Wake Forest did not know the fate of its 2017 roster until early August, so it is likely that there will be some moving parts and perhaps a few surprises surrounding the program in the next few months.