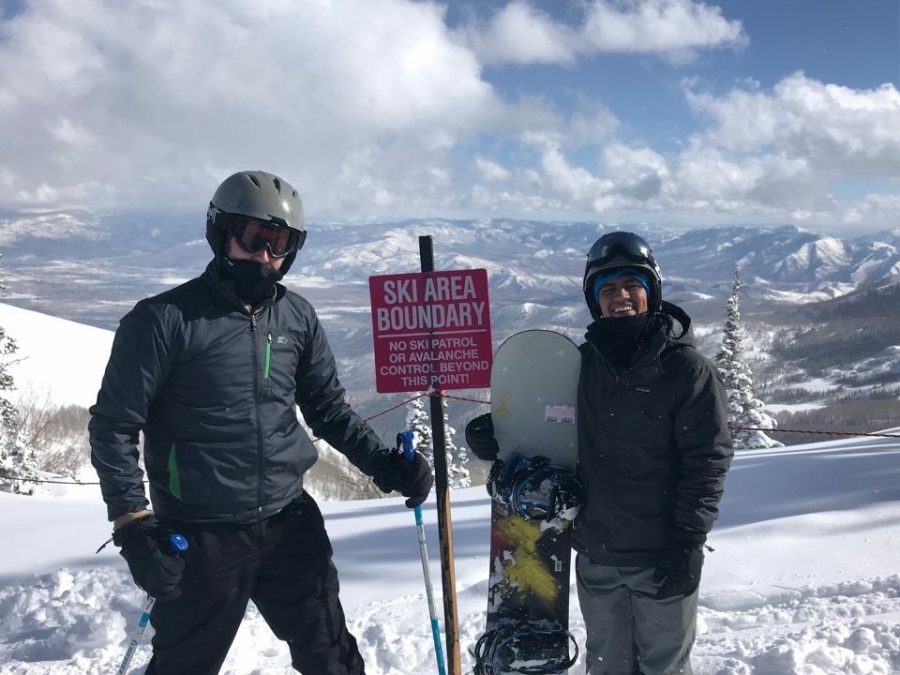 What makes a great Spring Break Trip? Fantastic leaders, a group of friends and apparently lots of snow. Just like many of the great opportunities Outdoor Pursuits offers throughout the year, spring break was no different. Eleven students traveled to Salt Lake City, Utah for six full days of ski slopes and exploring.

The small crew led by Rebecca Wiebke, Luis Herrera and Swain Lewis stayed in an Airbnb in a suburb of the city decently central to most places the group traveled to. It was only a short drive each morning on a bus or in the rented vans, Black Ice and Pow Pow, to Brighton and Snowbird ski resorts. A nice blanket of snow from the night before primed the slopes the first day of skiing and snowboarding. Locals came out in full force as it was an event that had not been seen in months.

The group was quite diverse in skill level. Some students had been skiing all their life and had no trouble maneuvering down a double black diamond. Others had only been skiing a few times in their lives yet grew a lot in the short amount of time they had. One student tried snowboarding for the first time and was able to confidently tackle some decent intermediate level slopes by the end of the trip. Lunch was packed the night before to eat at the slopes and meeting times were set to make sure everybody was still alive throughout the day. Dinners were cooked and eaten as a group. Over the few days, the crew enjoyed some spaghetti, homemade pizza, low country boil and even pho noodles.

The group decided to take a rest day in the middle of the week to explore Antelope Island. A state park in the middle of the Great Salt Lake connected to the mainland by a land bridge, the island is home to lots of great hiking and several herds of bison. The main visitor center had lots of information on the lake as well as some helpful park rangers well- aware of the best hiking trails around. The crew ate lunch at a scenic overlook, played hide and seek among the rocks at the top of a mountain and even had a snowball fight on the climb down. The most interesting part of the day was certainly the old ranch house that had existed on the island for over a century. The group met a nice guide who knew a lot about the 1920s sheep herding business and how to lasso cattle. He was even nice enough to show the Wake Forest students his owl in the back yard.

At the end of the week, everyone left the trip having improved in their skiing and snowboarding abilities, having made new friends and having had a great time. The leaders of the trip are confident there will be more trips much like it in the future.