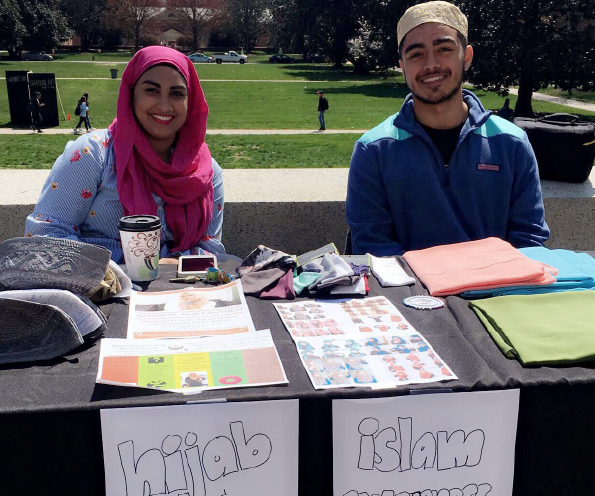 The Muslim Students Association at Wake Forest, founded in 2008, is hosting its fifth-annual Islam Awareness Week. The week was started by the current Muslim Life Director, Naijla Faizi, who was the MSA President at the time, in an effort to help educate the Wake Forest community about Islam.

One of the events that shows this element of the Muslim community was the Gallery Walk in Benson, which had posters of notable Muslim people. Each event throughout the week is intended to provide a different educational opportunity for students to engage with aspects of Islam and lived Muslim experiences.

The purpose of the event on March 19, Demystifying Islamic Head-Coverings, was to create an environment of empathy for Muslims who wear head coverings. MSA invited non-Muslims to wear hijabs and kufis, which are worn by Muslim women and men, respectively. These participants were invited to return and reflect on their experiences. Junior Alec Jessar commented on his experience.

“I felt that I could learn a lot from this event and wanted to take full advantage,” Jessar said. “I felt proud wearing it, even though it was not my religion, to be a part of that for a day,”

Another student commented that although she was physically more covered, wearing the hijab actually made her feel more open. By the end of the day she even developed a sense of attachment with the headscarf.

The event on March 20, Shorty’s Trivia, provided a fun and competitive way for Wake Forest students to both learn about and test their knowledge of Islam.

Students from various academic disciplines were able to apply their coursework related to Islam across four trivia themes: “General Questions about Islam,” “History,” “Prophet Muhammad” and the “Qur’an.” The March 21 event, in honor of Women’s History Month, was an effort to show complex representations of Muslim women.

Amani Al-Khatahtbeh, who founded MuslimGirl.com, spoke about her activism as a Muslim feminist who uses media to create spaces for the experiences and perspectives of other Muslim women who have often lacked a platform. Amani said that using the label “Muslim feminist” is in fact redundant, as Islam inherently supports women’s rights and equity. However, Amani argued that such labels are still valuable because they allow Muslims to communicate their values and religious interpretations in the language of our current generation.

It is a common belief that it is inappropriate or insensitive to ask Muslims questions about their faith. This is why on March 22, the Wake Forest MSA is hosting #AskAMuslim to engage questions people have about Islam and being Muslim. To close the week, there will be two events on March 23.

The first is an opportunity for the Wake Forest community to show solidarity with Muslims on campus and to observe Muslims pray, which will be located in the Green Room of Reynolda Hall at 2 p.m. The second event is to create a welcoming and supportive space for the refugees that have moved to, and now reside in and around, Winston-Salem, which will take place from 5:30 to 7 p.m. in Wingate.

It is also an opportunity for Wake Forest students to learn about refugees personally, instead of solely hearing about them on the news.