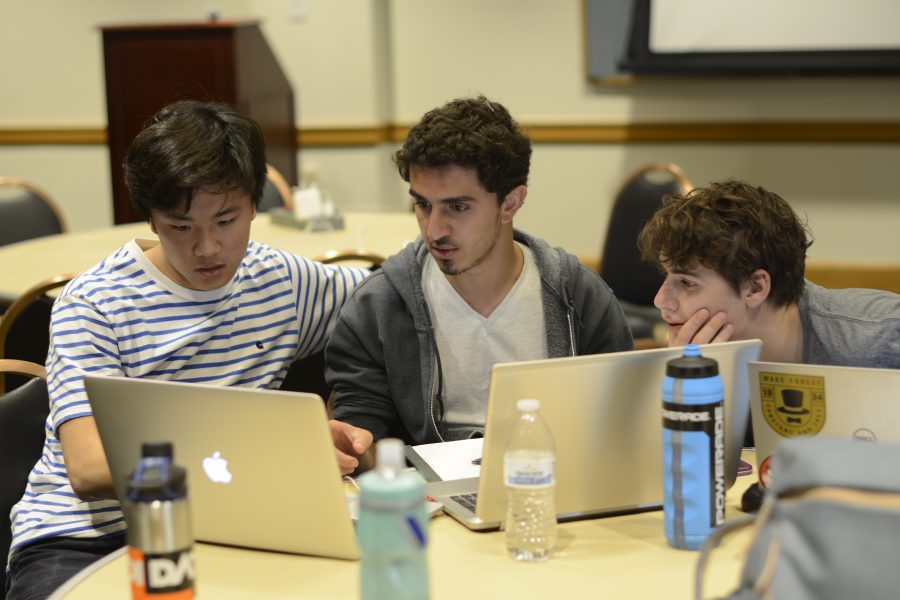 Over 50 students from Wake Forest, Davidson College, High Point University and NC State University attended the event and coded service-related projects in keeping with the theme, Pro Humanitate. Projects included an online sign language dictionary, a food delivery website similar to that of Meals on Wheels, a Fitbit application designed to keep students awake in class and a typing tool for elementary school students.

“The Department of Computer Science needed an event to capture who we are and what we do,” said junior Nick Gerace, hackathon director and co-founder.

Wake Forest has now begun to join the stage with other computer science programs across the state, as this event follows the soft launch of WakeHacks Zero last spring, a six-hour hackathon open only to Wake Forest students. UNC-Chapel Hill and Duke have hosted annual, 24-hour hackathons since 2013, and NCSU will host their fourth-annual hackathon this year. WakeHacks hopes that Major Leagues Hacking, the official student hackathon league, eventually brings them under their reign, but for now, WakeHacks is content operating individually.

The event included intermittent events such as Zumba, a student handing out bananas in a gorilla costume and presentations by local companies Inmar and Indeed. At the end, all nine teams were judged for the technical complexity of their project as well as its relation to the service-oriented theme.

“I didn’t really know what to expect, but I was impressed,” said Gerard J. Hall, founder and CEO of SportsMEDIA Technology Corporation. “The knowledge that people presented was impressive. The fact that people were able to create such highly-functioning applications in such a short amount of time — equally impressive.”

Hall judged the event along with Brian Rogers, the director of software engineering at Inmar. Junior Graham Skeats and sophomore Alex Ross tied for first place and both won Google Echo Dots. Hall noted that if the two worked together to combine their ideas, it could become a product “worth taking to the market.”

Skeats developed an app which allowed a user to determine the severity of different medical emergencies through answering a series of quick questions, drawing on his experience as an EMT and 911 operator for inspiration.

“I was certainly surprised to win since there were several great apps and ideas being presented by other teams and only some components of my app were working,” Skeats said. He plans to continue working on his project and have a complete version by the end of the semester.

Ross, who is an Inmar tech scholar, developed a push-notification hardware center which centralizes a user’s calendar information and does not rely on having a tab or computer open, as google calendar currently does.

“I came up with this idea to address an ever-growing problem in the tech industry, the fragmentation of information across multiple platforms and services,” Ross said. He plans to continue his project and expand it to more media platforms, as well as to remove the hardware device’s dependence on having an open computer.

While many groups came with a project idea in mind, others were inspired by an Ideation Session led by Paul Pauca, a professor in the computer science department, at the beginning of the event, and did not form their team until the day-of.

Junior Lawton Manning, who teamed up with junior Gabriella Middleton and freshman Katherine Wang to build the sign language dictionary, came up with the idea in part because of his involvement with the American Sign Language club on campus. Manning had only met Middleton and Wang briefly before they formed their team the morning of. Despite this, their makeshift team ended up placing second in the competition, following the tie for first place.

“Being placed at second was a mind-blowing experience … it really reminded me to never doubt myself nor the skills that I have,” Middleton said. “Once you have the skills and the plan, you just have to believe that you can do it and also have fun and enjoy your time with your team that helped you through the project.”

Students without a specific project idea could experiment in a makeshift Raspberry Pi lab run by computer science systems architect Paul Whitener, or could choose to tinker with various mini projects throughout the day.

“The initial feedback from our friends across North Carolina has been incredible,” Gerace said. “We may still have our four same classrooms in Manchester, but the shockwaves created by the hackathon stretch campus-wide.”

Many appreciated the shorter timeline the event offered students, as the majority of hackathons span 24 hours instead of 12.

“It was very organized but informal … I think the theme made everyone a little less cutthroat,” said sophomore Swaran Udhayaswaran. “It was really nice to have multiple schools here because you get to learn about their experience doing computer science elsewhere.”