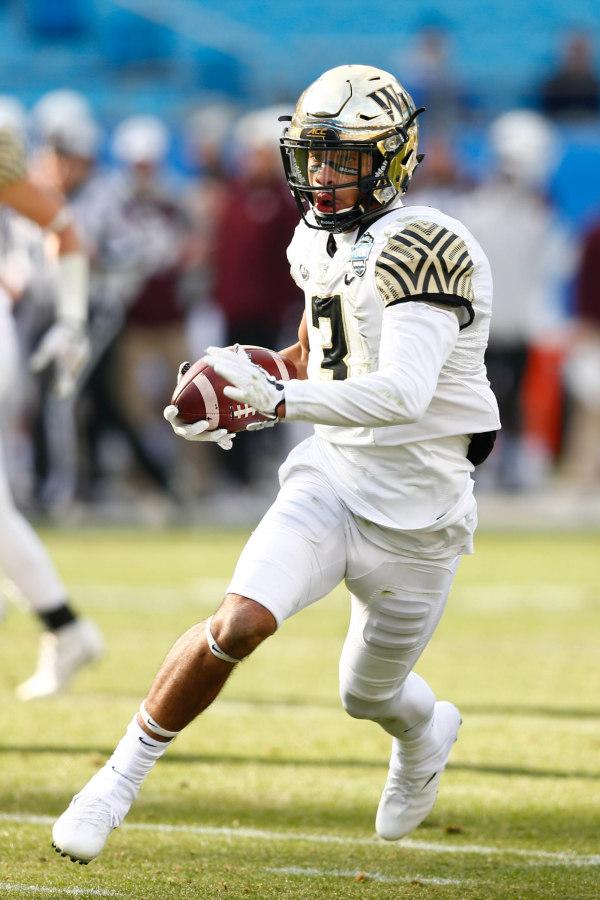 Jessie Bates III came to Wake Forest in 2015 as a three-star recruit with few offers from power five schools. After redshirting for a season, the Fort Wayne, Indiana native made himself known the following season and was recognized as a Freshman All-American.

In his short career at Wake Forest, Jessie Bates III recorded 177 tackles, forced two fumbles and caught six interceptions. After two impressive seasons the redshirt sophomore decided to leave Wake Forest for the NFL. He is now projected to be drafted as early as the first round. He would be the first Deacon since Kevin Johnson in 2015 to be drafted in the first round.

Leo Kone: For someone who has never seen you play, who would you compare yourself to in the NFL?

Jessie Bates III: I would compare myself to a couple of different players in the NFL. The first is Tyrann Mathieu because of his ball-hawking ability and ability to return the ball for scores. I would also compare myself to Micah Hyde; he’s not the most talented player, but his preparation leads him to the success that he has on Sunday’s. That’s what I take pride in as well.

LK: You have a lot of highlights in your career as a Demon Deacon, what would you say is your favorite moment playing for Wake Forest?

JB3: I would say my favorite moment came when I was a redshirt freshman. We were playing Virginia and I caught an interception that I took to the house. That was probably the most exciting moment and it was our sixth win that season, which sent us to a bowl game for the first time in a while.

LK: What has it been like being a part of a program that has gone from 3-9 to 8-5 and back-to-back bowl wins?

JB3: Clawson has done a great job building the program through recruiting the right guys who love football. Just seeing the program transition from a losing team to a winning team has been amazing. The guys on the team just keep raising the bar and that’s why we continue to win games.

LK: Is there a coach that had an impact on you during your time here at Wake Forest?

JB3: I would definitely say Mike Elko, but he’s gone. He left for Notre Dame and now he’s at Texas A&M. I think that the relationship that we built definitely helped me improve my game. Also, Coach Hourigan, the strength coach. I came in at 170 as a redshirt freshman and I gained 20 to 25 pounds. So I think he has had a huge impact on me as a football player and as a man.

LK: When you decided to enter the draft, there were a lot of things that NFL scouts and coaches wanted you to improve. What was that like, preparing for the draft knowing you had your work cut out for you?

JB3: When I was preparing for the draft I knew that I had to gain a little bit more weight, especially because I was losing weight during the season. As I was training in Tampa, FL I gained about 11 pounds. I was weighing 203 in Florida and I ended up weighing 201 at the combine. I definitely knew what I had to do and I did it. That helped my draft stock.

LK: You were a three-star recruit coming out of high school and a lot of people questioned your decision to leave school for the NFL. What would you say to those who doubted you and does that motivate you?

JB3: I think that what motivates me is just being able to put on for my city — Fort Wayne, IN. Just knowing that it’s such a small town and a lot of guys don’t get recruited. Being able to be a role model for the kids there is amazing. I just want to show them that they can follow in my footsteps and believe in themselves, which is a motto that I go by. To the doubters, I mean this is just the beginning and I hope they keep doubting me because it pushes me ten times harder.

LK: What was the original grade that NFL scouts were giving you and what was your motivation to leave for the draft?

JB3: Obviously the decision to leave was very difficult. The main grade that I was getting from scouts was third round, so I kind of took a leap of faith. Like I said earlier, I knew what I had to do to raise my draft stock and that was to run a good 40 and put a little bit more weight on. Now I feel like a lot of teams are liking what I can do. Coming out I knew what I was capable of and I always believed in myself.

LK: Mike Tomlin, the Steelers head coach, was at your pro day. What was that like, to have such a respected coach come to watch you?

JB3: That was an awesome experience just because you grow up watching Mike Tomlin on TV with the Steelers and they’ve been a powerhouse in the NFL. He was also a great guy to meet and talk to; he just seemed like a regular dude. And the fact that he’s watching my film now is awesome as well.

LK: People have compared you to Kevin Johnson, who went in the first round in 2015 and was also a three-star recruit out of high school. Has he given you any advice through this process?

JB3: Yes. I talked to Kevin before I decided to declare. I asked him if I should leave or not, and he told me that you just have to believe in yourself and trust your gut. Now that I have declared, we still talk and he has just been telling me that it’s time to go and get it. Kevin has been there for me through this process and I thank him for that.

LK: How do you want to be remembered at Wake Forest?

JB3: I want to be remembered as more than just an athlete. I think I created a great network here and built relationships that are going to last me a lifetime.

I think I have taken advantage of getting to know everyone, even the parking lady. I think I’ll leave the legacy of Jessie Bates being a great guy and a great football player.