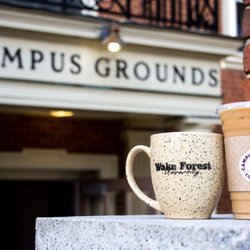 Late on Monday evening, Campus Grounds wasn’t filled with light chatter or the sounds of students studying. Instead, the front room was filled with roaring laughter as students performed stand-up comedy as a part of Wake the People Laugh open mic nights.

Sophomore Lucy Porter, along with seniors Ellie King and Sam Ederle, started the open mic nights at Campus Grounds after realizing there was a need for stand-up comedy on campus. Wake the People Laugh open mic nights occur every two weeks and are open to anyone interested.

Porter performed an individual stand-up show last semester, called Lucy Porter Is: Trying Her Best. It was the response to this event that inspired her to begin open mic nights.

“[Wake the People Laugh] consistently sees a diverse group of people from all pockets of Wake Forest both supporting and performing; there’s a lot of potential to grow a vibrant comedy community here,” Porter said. “That’s my main goal for Wake the People Laugh: to generate an open and creative space for everyone to feel comfortable to explore the world of comedy.”

On Monday night, eight people performed, including Porter and King, who hosted the event. The student comedians, many of whom were doing stand-up for the first time, had the audience laughing the entire time. The stories and jokes they told were relatable to our campus, like how the sororities are all over Instagram right now claiming that they love Machi the most.

Freshman Rawson Clough told a story about the mishaps of group projects (moral of the story: don’t be the slacker in the group). Junior David VanEenenaam talked about the stupidity of the Tide Pod Challenge, joking that if you put “challenge” at the end of anything, it will be bound to go viral. Keeping in mind that Easter falls on April Fool’s Day this year, junior Maggie Powell named Jesus’ resurrection the best April Fool’s prank of all time.

Several of the first-time performers agreed that this nerve-wracking experience allowed them to step outside of their comfort zones. For freshman Davis Jack, who has now performed twice, those nerves have given way to an appreciation of comedy.

“After my first open mic performance, I quickly fell in love with the showmanship of stand-up and, more importantly, the joy it gave to the people watching,” Jack said.

VanEenenaam said he wasn’t sure about his material until moments before he arrived at Campus Grounds, but pointed out that he would immediately know if it was funny or not. King, a member of the Lilting Banshees and Editor-in-Chief of Fake Worest, echoed these sentiments.

“It’s always nerve-racking getting on stage and trying to make people laugh, particularly when you are performing original content,” King said. “It’s a really vulnerable thing to present creative work in front of an audience, especially under the expectation that it’s supposed to be funny. You get immediate feedback from the audience on whether you were successful, and that can sometimes feel daunting.”

Even if the audience could tell that the performers were nervous, they didn’t show it. The atmosphere of the evening was relaxed and the audience was very accepting of the performers. Both Powell and VanEenenaam noted that they had friends in the audience, so they would have people to support them no matter what. Even if your friends aren’t laughing at your jokes, they can (allowably) laugh at you.

Porter offered some advice for those thinking about breaking into stand-up comedy.

“Keep in mind that every single person, from first-timers to Jerry Seinfeld, have bombed at some point, so you can’t take it personally” she said.