Students Participate in the March for Our Lives 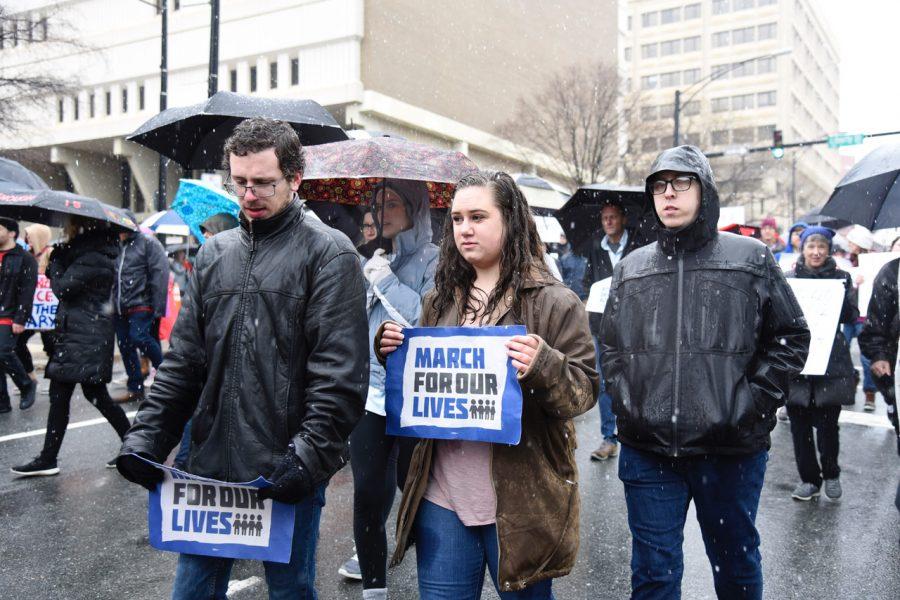 At the March for Our Lives in downtown Winston-Salem on Saturday, March 24, Corpening Plaza was filled with the sounds of a Bob Dylan song written in 1964 in the depths of the Vietnam War:

“Come senators, congressmen / Please heed the call / Don’t stand in the doorway / Don’t block up the hall … There’s a battle outside / And it is ragin’ … For the times they are a-changin’.”

The 1500 protestors insisted that their senators and congressmen “heed the call” today and enact gun control legislation in the wake of a mass shooting at Marjory Stoneman Douglas High School in Parkland, FL last month.

The march, similar to others held in over 800 cities worldwide on the same day, was part of a movement started by teenage survivors of the shooting, which left 14 of their classmates and three of their teachers dead. A moment of silence in remembrance of the victims was followed by speeches — many of them by high school students — after which the protesters flooded the downtown streets.Rain and snow did not quell the protesters, who held rain-streaked signs with slogans such as “Prayers aren’t bulletproof” and “If I die in a school shooting, just drop my body on the steps of Congress.”

Two Wake Forest students shared the role of master of ceremonies. Junior Char Van Schenck and freshman Tris Harper acted to transition from one speech to another while keeping the crowd engaged with chants such as “vote them out” and “this is what democracy looks like.” Although both Van Schenck and Harper are members of the Young Democratic Socialists of America chapter at Wake Forest, a sponsor of the march, they took on their roles as individuals.

Van Schenck and Harper said that they contributed to planning the march by encouraging organizers to incorporate the topic of the intersection between gun violence and white supremacy, as Nikolas Cruz, the Parkland gunman, was trained to use guns by the Republic of Florida, a white supremacist organization that hopes to turn Florida into a white ethno-state. As such, Harper and Van Schenck urged the march’s organizers to diversify the list of high school speakers, which was originally majority white.

“This issue, like every struggle, needs to be lead by diversity or else it will collapse into another in a long list of pipe dreams that failed or were used against marginalized people,” Harper said.

Freshman Jonathan Trattner also took on duties behind the scenes and on stage, helping to plan the event and ultimately leading the crowd to begin marching.

Many of the speakers — including Ira Guttenberg, the uncle of Parkland victim Jaime Guttenberg, and Shawn Roycer, survivor of the 2016 shooting at the Pulse nightclub in Orlando — focused on the problem of easy access to guns and urged listeners to vote against politicians funded by the National Rifle Association (NRA).

“I want to save lives. I want kids to be able to go out and go to school and be comfortable and feel safe,” Roycer said in a follow-up interview. “[I want] the fear level to go down, the respect level to go up, the common sense level to be more forefront. Politicians need to do their jobs.”

With the exceptions of Guttenberg, Roycer and kindergarten teacher Christy Robinson, the speakers consisted of high school students from Winston-Salem. While they are too young to have voted in the most recent congressional election, they promised to speak with their vote in the future and made a public plea for others to do the same.

“If there’s one truth I’ve learned from this fight, it’s that there’s one thing easier for killers and murderers to buy than AR-15s, and it’s [Republican Rep.] Virginia Foxx … It shouldn’t come as a surprise to any of us here that our corporatist, morally-bankrupt politicians choose the NRA over us when they’re on their payroll,” said Aidan McCarthy, a student at Reagan High School.

McCarthy added that voters must decide that representatives’ votes against common-sense gun legislation will be the last votes they ever cast as elected officials. Some of the high school students also stated that a consequence of mass shootings is that students no longer feel safe at school.

“I go to school to learn, not to worry that it may be my last day,” said Cassie Daukus, a freshman at Reagan High School. “I might have rushed out the door or was mad in the morning and didn’t say ‘I love you’ to my mom, or I said I hated my siblings the night before.”

However, some speakers also stressed that mass school shootings are not the only manifestation of the perceived gun violence epidemic in America. For example, Marley Priest, a student of Early College of Forsyth, brought up the fact that many people fall victim to gun violence as a result of domestic abuse.

“When we have police shooting unarmed black men, a war on drugs that has allowed for horrific violence in our communities, and interventions committed by our CIA in Yemen and in the developing world, we know that we not only live in a society plagued by guns, but a society in which violence has become a part and parcel of being a student and being a citizen of this world,” McCarthy said.

To accompany the march, multiple organizations set up booths to advance the cause. For instance, Democracy North Carolina, a group focused on increasing voter participation, pre-registered dozens of 16-and 17-year-olds at the event.

“It was important for me to instill in them the importance of participation in a democracy, how the right to vote was won by blood, sweat and tears and that voting is a way of breaking down barriers that keep us divided,” said Linda Sutton, a Democracy NC Organizer.

In addition, the two Democratic congressional candidates for North Carolina’s fifth district attended the march, and both expressed strong support for gun reform legislation. Winston-Salem City Councilwoman DD Adams, who represents the city’s fourth ward, and Jenny Marshall will face off in the primary election on May 8. The winner will eventually run against incumbent Foxx, who has an “A” rating from the NRA.

“I won’t take NRA money; I never will — that’s not in my DNA,” Adams said in a follow-up interview. “Anything that hurts a human being, that’s not part of what I believe in and if nobody wants to vote for me because of that, so be it.”

Marshall served as a marshal to help direct the crowd. “I’m a public school teacher and a parent,” she said. “I went there to support not only my children but also other people’s children and community members who felt like they wanted to state their opinion about gun control.”

Wake Forest students who attended the march said that they were moved by the attendance and the experience of gathering with others who were similarly passionate about demanding change.

“The experience was more emotionally-moving than I thought it would be,” said junior Drew Finley. “I saw a young boy with a poster taped to his back that read ‘Am I next?’ on it. In that moment I was reminded how important the march was for kids like him, because in the end it is not a partisan issue: it is about keeping America’s children safe and working towards a country where no one has to live in fear.”

Sophomore Lizzie Lordi said that attending the march was important to her because she attended high school 20 minutes away from Newtown, CT, where a mass shooting occurred at an elementary school in 2012, killing 20 first-graders and six teachers.

“When the shooting took place, two of my cousins were in elementary school in Newtown, and the time it took me to confirm that they were not attending Sandy Hook was the scariest time of my life,” Lordi said. “I marched because I want to be part of the movement that demands change so that no one fears for their life every time they enter a school building or a movie theater or a concert venue or a home.”

Above all, activists at the march reinforced the notion that action does not stop when tents are taken down or handmade signs are put away. McCarthy left with a warning to all elected representatives:

“This November, when their contracts end, they will look down the barrel of our outrage and wish they never made enemies of us,” he said. “Today and always, we must struggle to cast out those who are complicit in the massacre of our generation, and forever force them to bear a legacy of a coward who chose the cruelty of silence over the righteousness of action.”