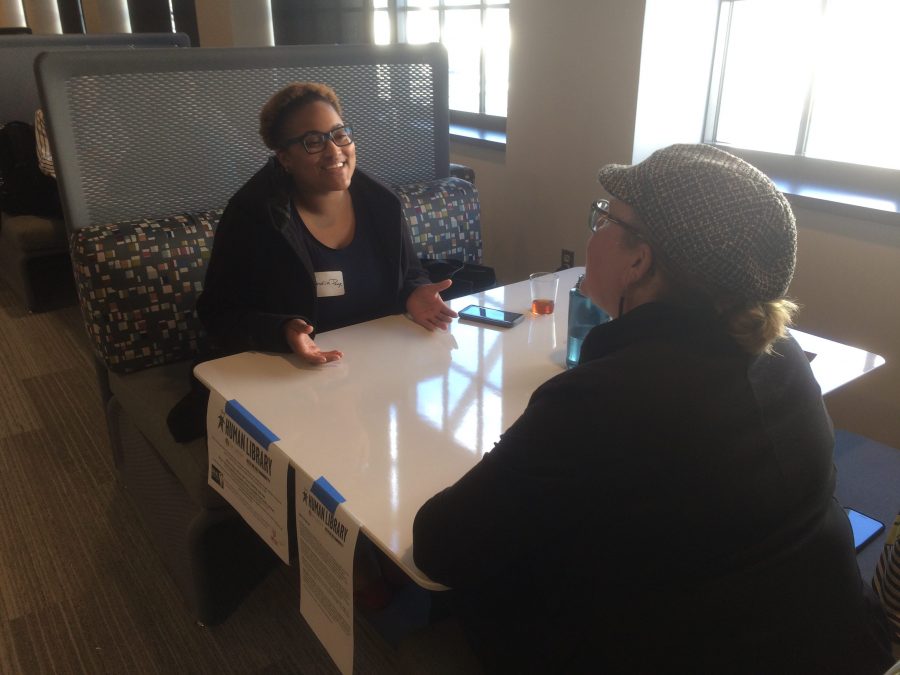 This event was made possible by a Rethinking Community grant from the Office of the Provost at Wake Forest, and was designed to foster authentic conversation about a range of topics, including diversity and inclusion, mental health and living abroad.

Faculty and staff from both schools, as well as community members, served as one of fifteen “books” that were available to “check-out” for conversation.

“We chose people to serve as books based on their willingness to have conversations across differences,” said Alana James, associate director of community engagement for Wake Downtown. James also served as a book herself and challenged participants to ask her about her experience as a first generation American.

Hu Womack, instruction and research librarian at ZSR Library and organizer of the Human Library, emphasized the importance of creating space for intentional conversations about potentially uncomfortable topics.

As a result, over 75 participants stepped outside of their ordinary comfort zones and filled the atrium of Wake Downtown with conversation.

Womack was inspired to organize the Human Library event after an email from President Hatch at the beginning of this semester encouraged the Wake Forest community to engage in meaningful conversations. Womack and Mary Beth Lock, director of access services at ZSR Library, collaborated to turn the vision of a Human Library into a reality. They modeled the event after a Human Library hosted by Carol Grotnes Belk Library at Elon University.

Molly Keener, director of digital initiatives and scholarly communication at ZSR Library, served as one of the books available for check-out. She encouraged people to talk with her about a variety of topics, ranging from Christian theology to scholarly copyrighting.

“One of the best ways we can connect [with other people] is through stories,” Keener said.

Talking with students about a topic other than academics was refreshing for her.

“The conversations I have had today have been gratifying,” Keener said.

The event was held at Wake Downtown due to its central location to both the Wake Forest campus and the WSSU campus.

“We hope students realize that Wake Downtown is a space for them, a space for gathering,” James said. “We are the new neighbors downtown and we are trying to bring community in, while branching out into the city.”

Womack echoed the importance of hosting events such as the Human Library outside of the Reynolda campus.

“It’s always important for any college to be involved in the community where it is located and this urban campus is right in the heart of the community,” Womack said.

Students from both Wake Forest and WSSU acknowledged the value of in-person interactions in an age of increasingly impersonal communication.

Kierra Bradsher and Jordan Waters, first-year students at WSSU, came to the Human Library to get off their campus and chat with people who were willing to engage in challenging conversations.

Kyle Flaherty, a junior at Wake Forest, found similar value in Friday’s Human Library. He visited the event after having a positive experience at ZSR Library’s pilot Human Library event last fall. Flaherty enjoyed the opportunity to develop empathy at both events.

“Empathy is a skill that is increasingly rare and the Human Library offers people a chance to develop that skill,” Flaherty said.