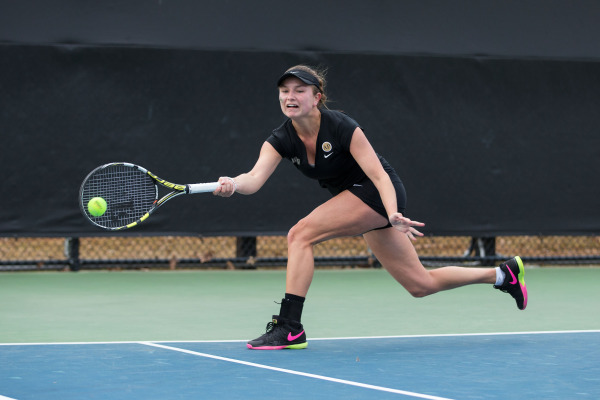 This spring has proven to be one of endurance and challenges for the Demon Deacons on the tennis court, but they are anything but defeated. This season our ladies have battled against some of the best teams across the nation, and they have proven that they are a force to be reckoned with. Only a few weeks into the season, the girls have a strong 14-3 record, 4-3 conference record in the ACC, defeating tough teams including Arkansas, Ohio State, and Auburn.

Head coach Jeff Wyshner is beyond thrilled with the work his team has been putting into this semester, and he is ready to see them take titles for Wake Forest. Their most recent victory over Notre Dame inside the Wake Forest Tennis Complex on Sunday proved to be another match of contention. The Deacs fought valiantly against the Fighting Irish, despite only having five available players for the roster.

The 31st-ranked doubles team of junior Emma Davis and sophomore Chandler Carter took their match at the No. 1 spot, 6-2, and sophomore Mary Caroline Meredith and freshman Eliza Omirou battled for a 7-5 win at the No. 2 spot.

Momentum continued in their favor as the singles matches took place.

Although the match was already won by Wake Forest, Carter proved her spot in the lineup with her win at No. 3, and Joanna Zalewski joined the winners’ circle as well, winning in a third-set tiebreaker 10-5 at No. 5.

With the win, the Deacs have moved to a power rank of No. 14 in the NCAA, and they are ready to continue this momentum straight to the top of the ACC Championships later this April in Cary, N.C.

The Demon Deacons will continue their five-match home stretch this Thursday against the No. 1-ranked North Carolina Tar Heels at 5 p.m., followed by away matches in Williamsburg, VA to battle William Mary and in Atlanta to compete against the Yellow Jackets of Georgia Tech.

Be sure to come and check out one of Wake Forest’s power house sports programs.