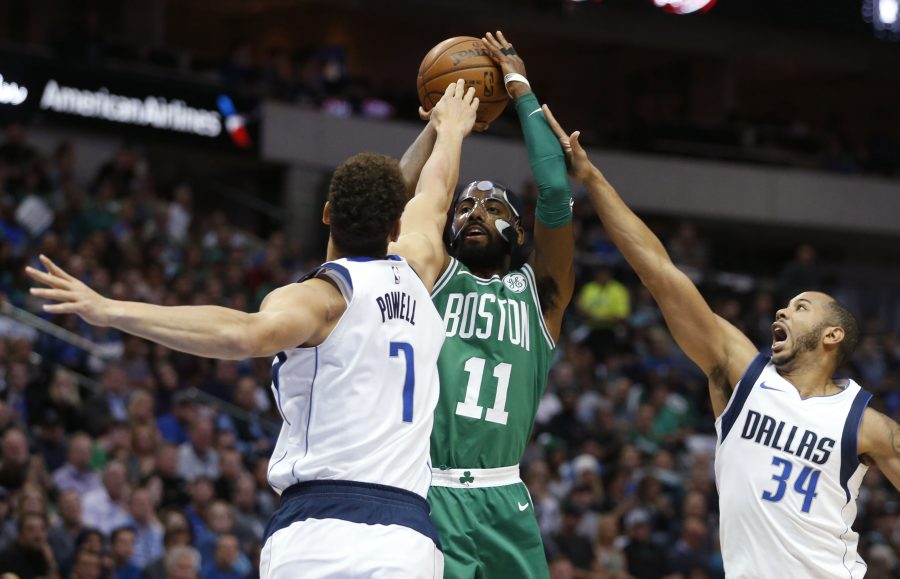 It’s almost upon us. With the Final Four coming this weekend, the absolute peak of the sports year is just entering it’s upswing. Baseball kicks off on Thursday and the NBA and NHL playoffs will ramp up in a couple weeks.  It’s also the time when we begin to see which teams are serious in their quest for wins.

However, as the NBA winds to a close, one thing can put a damper on any teams’ championship dreams: injuries. Let’s talk about two big injuries and how they’re going to shake up the playoff races.

This one hurts if you’re a Celtics fan.  One of the major questions surrounding Irving as he ascends to superstar status in the league is that of his durability. Irving has played 70 games or more in a season three times, but this year as he finished at 60 games.

The Celtics are a whole new team when playing with Irving; Boston’s offensive rating is nearly seven points better when he’s on the floor. Without him, despite the emergence of Terry Rozier as a playmaker from the point guard position, the Celtics struggle to consistently get good offensive possessions. With ball-hawking defensive specialist Marcus Smart also out (potentially for multiple rounds of the playoffs as well), the Celtics went from being as deep as anyone in the backcourt to suddenly very thin. Add this to key-reserve Daniel Theis being lost for the year, and the Celtics’ roster is lacking the true bench presence it had relied on earlier in the season.

Giving significant minutes to Abdel Nader and Shane Larkin this deep in the season certainly isn’t ideal and in the playoffs is ghastly. Will the Celtics still probably make it past the Heat, Bucks or Wizards without Irving? Probably, but it’s certainly not a guarantee, especially with their apparent problems staying healthy.  As for the later rounds, if the Celtics face fully healthy Raptors or Cavaliers, it’s hard to imagine them finding a way to win without Irving at 100 percent.

While Irving and Curry are both star point guards in their respective conferences, Curry’s injury affects the shakeup of the playoff race a little bit differently than Irving’s.  When Gordon Hayward went down five minutes into the season, the Celtics’ season almost immediately lived and died with the performance of Irving. Yes, Al Horford is a great player, but he lacks the ability to take over games. The Warriors are so talented across the board that even without one of their four all-stars they can beat nearly anyone in a seven-game series. But, as the playoffs get closer to the conference and NBA finals, the Warriors certainly need to be at full strength. Houston has won 10 games in a row. The swashbuckling “three musketeers”-esque trio of James Harden, Clint Capela and Chris Paul together lost one game in nearly 40 tries. The Rockets are playing at elite levels only matched by the Warriors team of two years ago. Even if Curry is back by the playoffs but not 100 percent, the likelihood of the Warriors winning that series doesn’t look great. Traditionally, grade two MCL sprains take around six weeks to heal; that’s how long Durant was out with his last year.

If I were coach Steve Kerr, I’d rely on the rest of the team to carry them past the first two rounds and potentially wouldn’t play Curry at all (unless absolutely necessary) to give my team the best possible chance to win when it matters.