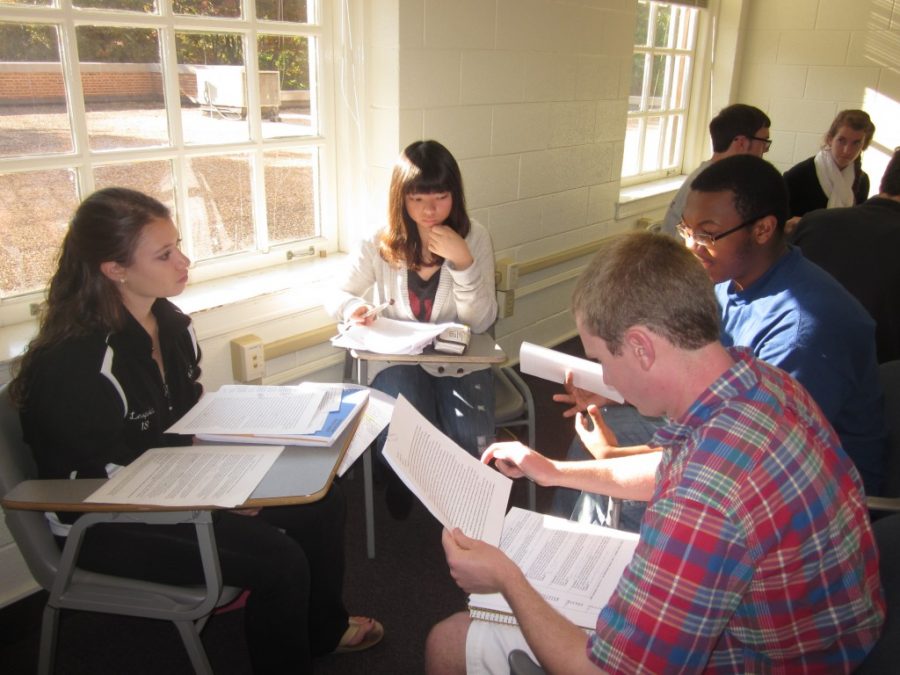 National Poetry Month started out with a bang in Tribble Hall, where the monthly literary salon was held in Ammons Lounge on Tuesday, April 3, to celebrate student poets and the winners of the Wake Up to Poetry Contest.

The literary salon, which takes place this semester on the first Tuesday of every month, is co-sponsored by the Creative Writing Department and the English Student Alliance. The salon is a place for writers on campus to share their works in every stage of development and across all creative genres. This is a place where storytellers, poets, essayists, stenographers and scribblers of all persuasions come to offer their declarations to their peers.

“The Creative Writing minor and the English Student Alliance founded the literary salon to give students the opportunity to share their creative writing with an audience, build confidence, learn from what other students share, and be part of the larger literary community at Wake Forest, which is thriving,” said Dr. Amy Catanzano, one of the three faculty members that run the salon. “The salons are lively, supportive environments. I want to encourage all of our students at Wake Forest, whether they are in creative writing classes or not, to participate by reading their own poems, stories and creative essays and supporting those who do.”

This particular salon celebrated the winners of the Wake Up to Poetry Contest — an annual contest co-sponsored by the Interdisciplinary Performance and the Liberal Arts Center, Wake Forest University Press and the Creative Writing department. This year, three winners were selected out of almost one hundred student submissions. This year’s winners were junior Maddie Baxter, junior Peter Schlachte, and senior Nicholas DeMayo, in first, second and third place, respectively.

The Wake Up to Poetry Contest had the privilege to invite Dr. Charmaine Cadeau to review the submissions, who teaches creative writing and poetry classes at High Point University. In addition to serving as Editor-in-Chief of High Point’s creative literary magazine, Apogee, she is co-director of the Community Writing Center. Cadeau has released two collections of her own poetry: “What You Used to Wear” (2004), and “Placeholder” (2013), the latter of which won the ReLit Award for poetry.

Cadeau commenced the salon with an appreciative nod towards Baxter’s winning poem, called “Two Black Holes Ate Each Other & Rippled the Fabric of Space-time.” She began by complimenting the ease with which Baxter navigates the intricacies of her formidable subject matter, black holes. Cadeau said that her selection of the winning poem was due to the poem’s ability to “slide between double-entendres, levels of diction and allusions.” Baxter’s poem is one that ponders the human condition, and our position as observers of the universe.

The poem follows the after-effects of the massive galactic calamity of cannibalistic black holes, and the minute reflections of such explosions that are situated here on earth. Baxter said that she wishes to convey the remarkable beauty that lies in chaos, both nebulous and human.

“Black holes are endless and destructive forces, but they are the most hypnotic to think about,” said Baxter. “I find peace in thinking about space and our subsequent smallness.”

This sentiment is carried in the final lines of Baxter’s poem: “Look the corridor of / your lover in the eye / and know that this is what a star looks like / when it’s exploding.”

DeMayo’s poem, “All change please” invites the audience on a symphonic journey to London, England, where DeMayo studied abroad. DeMayo’s poem brings a wry, humbling humor to the seemingly mundane topic of intercity travel. The poem’s title brings to mind the mechanical voice that echoes overhead on the Tube, London’s subway system.

At the conclusion of the three winners’ recitations, the salon was opened up to student readers on a volunteer basis. The supportive, community environment of the salon fostered a space for experimental creation, confessional poetry, and odes to family members from new and veteran readers alike. Each was met with encouragement and applause.