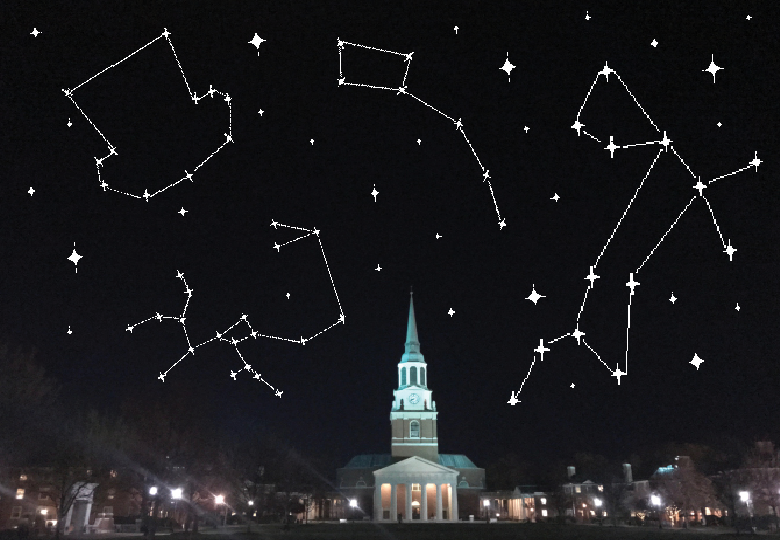 The Reynolda Campus has many reasons that make a walk at night a wonderful experience. It is filled with magnificent magnolias, flowers spread around open grass areas and a Georgian architecture which bridges the buildings across time. Yet, one major element is now missing: stars.

Stars vanishing from night skies is a recurring event often thought of as a price that comes alongside development and ever-expanding civilizations. With recent high rates of light pollution, it has also become a problem at Wake Forest.

In an effort to solve this problem while lowering energy costs on campus, the Office of Sustainability, in partnership with the Department of Physics, launched Project Night Light.

“The idea is using measurements of outdoor lighting on campus to limit light pollution,” said Nathan Peifer, program coordinator for the Office of Sustainability. “We [also] hope that [those] measurements can guide our campus broadly in providing enough illumination for student safety but also reducing the amount of energy that we are using.”

On June 5, 2017, after President Trump declared that the U.S. would not pursue the carbon-reduction pledges of the Paris Climate Accord anymore, a U.S. coalition of private businesses, cities, colleges and states signed the “We Are Still In” commitment to cut carbon pollution and deliver on the promises of the agreement by themselves.

According to the International Dark-Sky Association (IDA), about 35 percent of outdoor lighting in the U.S. is wasted towards the sky due to lack of shielding measures and poor placing and aiming. This wasted energy alone is responsible for the release of around 21 million tons of carbon dioxide per year in the U.S. alone.

Wake Forest, as a member of the “We Are Still In” movement, designed project Night Light as the latest in a series of structural changes including building renewals and retrofits towards a more sustainable and energy-efficient campus.

“If you have lights that only project down, then you [can] save half of your light, at least, because you don’t need the light to go up,” said Professor Jed Macosko, who teaches the class physics and chemistry of the environment. “It doesn’t help anybody to be safe.”

Project Night Light is still in the data-analysis stage, but possible solutions involve the use of reflectors that limit the amount of light projected towards the sky, improvements on the focus of the spotlights at Wait Chapel and a redesign of the acorn-shaped lamp posts to enhance illumination efficiency.

Besides the energy implications, light pollution is also presenting a serious threat to the activities of the astronomy lab located at the Olin Physics Laboratory. Among the stars in danger of vanishing from Wake Forest’s sky is Polaris — known as the “North Star” because it is used to calculate latitude.

“We have a lab which teaches students about navigation. If we can’t see [the North Star], we can’t do that lab,” said Professor Paul Anderson, who teaches Introduction to Astronomy. “It is getting hard with some constellations to even determine what the shape of the constellation is.”

If the light pollution continues, students who would like to take the class would likely have to move to an observatory off-campus. According to Macosko’s latest estimate, around one fourth of the undergraduate population takes introduction to astronomy at some point.

“It’s a great class,” said junior Raymond Clark, a teaching assistant in the Department of Physics. “It’s not so advanced that non-science majors [have difficulty] understanding it and really teaches you a lot about the universe.”

Part of Project Night Light’s initiative is with the participation of students from Macosko’s class, who will divide into teams to measure the light pollution across campus. The idea is to raise students’ awareness of the issue while engaging them as part of the solution.

“The mission of [the Office of Sustainability] is to empower others to lead the transformation to a sustainable campus,” Chief Sustainability Officer Dedee Johnston said. “Anytime we can facilitate a project like Night Light, we are fulfilling that mission of creating a living and learning laboratory.”

Students are going to start measuring light pollution levels very soon. After the data collection, the board of the project will decide the best approach to cut down light pollution on campus.

“It will be neat to be one of the people actually initiating the project as opposed to just reading [about] it,” junior Olivia Street said. “Doing these hands-on experiences and, if we have good results, changing Wake Forest’s campus would be really impactful for me.”