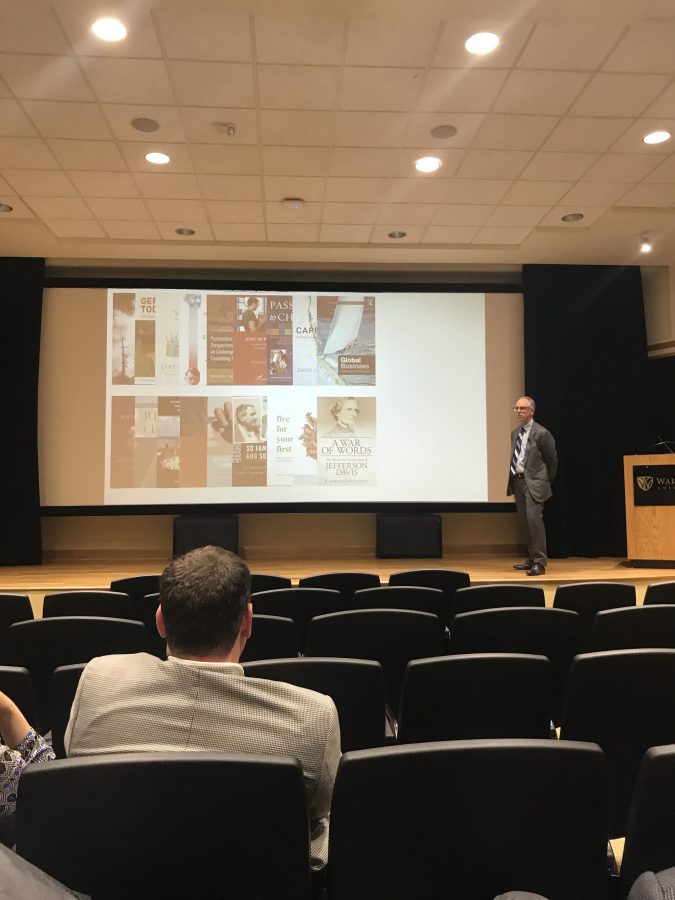 On the evening of Monday, April 2, Pugh Auditorium was filled almost to capacity with anticipatory chatter. The excited noise, however, was not from students talking with their peers; instead the room was filled with professors, faculty and staff all catching up and sharing news among various departments. The occasion was Provost Rogan Kersh’s Annual Address, where he updates the faculty and staff about the accomplishments of the past year while also providing guidance for the future.

Stewart Carter, professor in the department of music and the interim president of the faculty senate, offered the opening remarks. He introduced Kersh, sharing Kersh’s various accomplishments as a Wake Forest student, his later publications, various awards at other universities and briefly profiling his tenure thus far at Wake Forest.

Following the introduction, Provost Kersh began his address with a question, asking: “When did Wake Forest go from a small, liberal arts school to a major, recognized university?” The proceeding answer came with a brief lesson in history, as Kersh explained that in the 1980s the first major fundraising campaign had a goal of raising $17.5 million. Later, during the tenure of President Emeritus Thomas Hearn, the Heritage and Promise Campaign set out to raise $150 million, and achieved its goal.

Kersh’s address, similarly titled “Promise and Heritage,” was centered around these two ideas: the promise inherently embedded in the faculty and their accomplishments, combined with the heritage of excellence and celebration at Wake Forest. Focused solely on the academic enterprise, specifically the faculty, Kersh began his address by highlighting specific achievements.

“We’ll start with the promise of path-breaking scholarship and creative work,” Kersh said. “I’d like to begin by taking us not just to Wake Forest origin, but going back 13 million years. Thirteen million years ago, a small creature meandered across what is now known as Africa, and many years later was discovered by a team including our own Ellen Miller.”

Miller’s groundbreaking, news-worthy discoveries were shared around the world, and in this situation served as just one of Kersh’s examples of Wake Forest faculty’s dedication to success. Another example he shed light on was the work of a Wake Forest-sponsored research center called the Center for Amazonian Scientific Innovation (CINCIA). Their research trip to Peruvian forests to discover the dangers of artisanal gold mining drew the attention of Pope Francis, eventually leading him to travel to the South American country.

Later, Kersh discussed the tradition of producing published work and research that Wake Forest faculty consistently achieve. He noted that faculty publish anywhere from 60 to 90 works each academic year, and that over 70 pieces of literature across divisions have already been published this year. Further, faculty have received 67 research grants this academic year alone,  including some in chemistry, sociology, mathemtatics and politics.

“I love that we have the creative work and research that takes place in these dramatic ways,” Kersh said to the audience. “This kind of sponsored research and publication activity must continue to grow, and we will enhance the visibility of the work you do and the impact it has in the Pro Humanitate way.”

As he was over his time limit, Kersh briefly touched upon the idea of heritage by focusing on the three ideas of conversation, community and collaboration, which he deems “terms and themes that come across repeatedly throughout [Wake Forest’s] history.”

“Conversation has been central to what we do, and indeed this year as ever we have had conversations across all kinds of themes and events and practices,” Kersh shared. “I love that every day of every week we have opportunities to talk to, engage and learn from others in extraordinary ways.”

He continued his portion on heritage by sharing the nationwide “Calls to Conversation” held by students and alumni around the country that have themes and guided dialogues. Moving to his theme of community, Kersh shared his idea of Wake Forest as a family by touching on the Rethinking Community initiative announced this time last year. The community portion also included a call to strengthen partnerships in Winston-Salem whether through Wake Downtown, work at local schools, volunteer organizations or others.

The talk closed with a call for continued success among faculty and staff, as well as intentional reflection upon the role of being a part of the Wake Forest community in the spirit of promise and heritage.