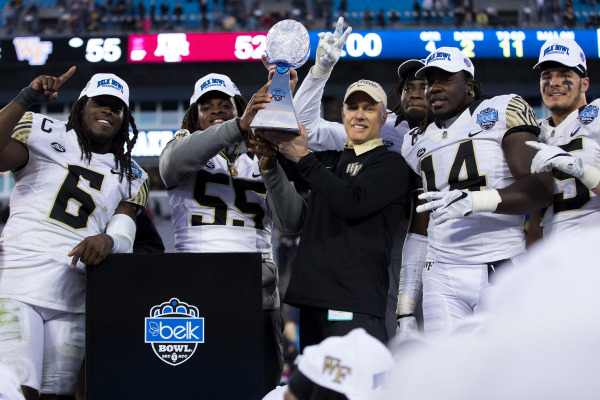 On Thursday, March 29 I had the opportunity to attend the second football scrimmage of the spring — and in the two hours spent sitting in the sun I had some time to observe and anticipate what the post-John Wolford era could look like for the Deacon offense.

What would be an offseason for the Wake Forest football program without a little bit of a quarterback competition? Fans may not recall, but junior Kendall Hinton was named the starter heading into the summer a year ago and it was Wolford who had to win the job over the then-sophomore, en route to a second-team All-ACC season. So while Hinton is currently the starter, and appears as though it is only his job to lose, taking note of his competition was one of the highlights of the afternoon.

The scrimmage began with Hinton taking the first team snaps, splitting time on the field with quarterbacks Jamie Newman and freshman Sam Hartman.

Hinton struggled on his first possession, throwing the ball in the dirt on his first attempt and reverting to his legs before most of his receivers were halfway through their routes. But after a few reps, the junior finally settled in and looked comfortable, finding sophomore Greg Dortch on a few occasions, notably on long third downs, while also connecting with redshirt sophomore Brandon Chapman for a four-yard touchdown pass on a throw on the run out of the pocket.

In two scrimmages Hinton has been impressive on the ground, to the surprise of no one in attendance, rushing for approximately six yards per carry,  and totaling 154 yards. Through the air the junior has demonstrated some improvement in his accuracy, completing 66 percent of his throws in his second scrimmage as opposed to just 38 percent in his first official outing of the spring.

Backups Newman and Hartman proved that the depth at quarterback will be a strength in 2018 as the pair both brings their own unique style to the offense.

Newman and Hartman both showed off the strength of their arms, throwing for touchdowns of 51 and 48 yards, respectively.

Newman’s came on a throw approximately 20 yards down the field to redshirt junior Steven Claude, who caught the ball in traffic, broke a tackle and broke free to the end zone.

Hartman’s came from an absolute dime of a throw, connecting with junior Alex Bachman down the sideline, 48 yards in the air and right on the numbers for the score.

“Right now, I’d say it’s Kendall No. 1 and probably Jamie [Newman] and Sam [Hartman] are competing for No. 2. Like every quarterback battle, it’ll play out,” said Clawson when asked about the status of his quarterback room.

“No doors are closed. It’s spring. Those are the three quarterbacks who are getting the majority of the reps, and none of those guys have played snaps in a game other than Kendall.”

It will certainly be interesting to see how the summer plays out, as well as the spring game, which will be played at BB&T Field at 3:00 p.m. on Saturday, April 7.