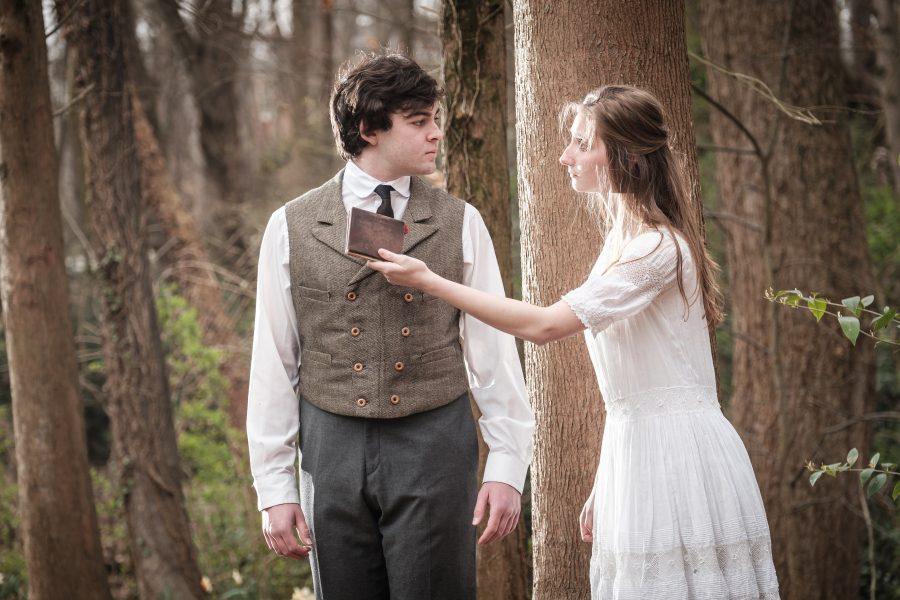 Visually and vocally stunning, the Wake Forest cast of Spring Awakening left the audience in awe. This spring musical, written by Steven Sater and music by Duncan Sheik, finds its roots within the 19th-century play by Frank Wedekind. It tells the tale of a town in Germany in 1891, where the world is dominated by the knowledge of the adults. The story covers the topics of sexuality, the shift from adolescence to adulthood, and morality, all while including bits of rock-n-roll. Sound confusing? To an outsider this does not sound like a typical musical, let alone a usual way for a musical to sound, but the Wake Forest cast helps display the importance of these themes in their exhilarating performance.

The plot follows as such. A young German girl, Wendla, has a desire to know where “babies come from” because she is a teenager and still doesn’t know. Her mother, mortified and baffled that she had the audacity to ask the question, beats around the answer. The avoidance of providing proper knowledge is a common theme throughout the story. On the other side of the town is a boy named Melchior who is defiant and provides support for his best friend Mortiz, who is currently blinded by puberty and potential academic failure. Melchior and Wendla stumble upon each other one afternoon and feel for the first time something they have been craving to experience. While they begin to fall in love, Moritz falls apart and slowly so does Wendla. The attempt for the kids to piece their world together against the odds creates a beautiful display of teenage rebellion and the effects of being suppressed by adults.

The Wake Forest production is directed by Sharon Andrews and has senior Caleb Cabiness (Melchior),  senior Anna Hibbert (Wendla) and senior Eli Bradley (Moritz) as its leads. The vocal talent of the cast can be seen easily in the production of each song. It is always fascinating to see how the music and lyrics tell the story away from the dialogue and the songs of Spring Awakening craft a beautiful storyline. Songs such as “The Bitch of Living” and “Totally F****d” act as pieces of rock that play a comical effect on a play set in the 19th century. Cabiness and Bradley especially shine in these two numbers, whether they are jumping off platforms mid-note or performing solos with ease. Hibbert’s songs as Wendla tend to be more ballads but equally display her vocal talent nonetheless. “Mama Who Bore Me” opens the show, and Hibbert performs it effortlessly. Again, her talents are displayed with “Whispering,” a sorrowful pea for how Wendla wants to be remembered in this world. Although it is an adjust from most musicals seen, the switch from rock to a ballad is a transition that does not phase the Wake Forest cast.

A specific mention needs to be given to the cast members of the show who play “Adult Woman” and “Adult Man:” Wake Forest professors Leah Elyce Roy and Michael Kamtman respectively. As the only adults of the show, they go from being teachers and headmasters of the school to playing the roles of various parents, and for Kamtman, the critical part of the doctor. While switching their characters scene to scene, their acting is so convincing that you believe they have transformed. Roy goes from being Wendla’s mother to Melchior’s in an instance and not a single bit of doubt inhibits you from not accepting it. They remain professional and never-troubled by their ever-changing roles.

The original concept for Spring Awakening created a chance for an eight-time Tony winning musical to be revived time and time again. Despite its story reflecting another century, the themes and story feel relatable for just about anyone who has gone through or currently is in their years of adolescence. The musical shifts and the pounding questions of morality attract the audience for successful work. The Wake Forest production beautifully adapts this Broadway production to The Tedford Stage and can be seen again this weekend. The shows run Thursday through Saturday at 7:30 p.m. and a final performance can be seen at 2:00 p.m. on Sunday, April 15.