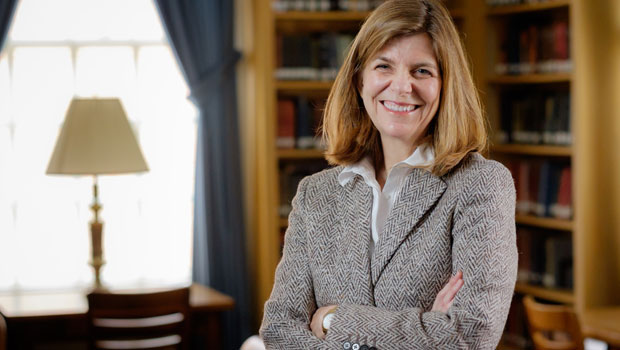 “Finance, football and fraternities, not philosophy and physics,” have become the pillars of the modern American university, according to a 2017 Hedgehog Review article cited by junior Drew Finley as he introduced Dean of the College Michele Gillespie for her public talk entitled “What is a Liberal Arts Education, and What is its Value?” on Tuesday, April 10.

In the lecture, which was co-hosted by the Wake Forest Euzelian Society and the Braswell Philosophy Society, Gillespie sought to answer these two questions, which she said were perhaps the most important issues that she faces on a daily basis as dean.

Gillespie, who has been dean of the college since 2015 and is also the presidential endowed professor of southern history, is “one of the most articulate defenders of the liberal arts,” according to University Scholar in Residence Michael Lamb.

She began her lecture by noting that modern-day liberal arts education faces wide skepticism and threats. For example, more than a dozen humanities majors were recently eliminated at the University of Wisconsin – Stevens Point due to financial hardship. The school justified the decision by arguing that they would rather offer majors that would increase students’ chances of finding a job after graduation. Throughout the lecture, Gillespie directly challenged this belief that a liberal arts education is no longer practically useful.

She also addressed what she said was the country’s growing disillusionment with higher education, pointing to a recent Gallup poll that identified a 20-point divide between Democrats and Republicans in their confidence in colleges.

“Democrats decry the rising cost of tuition and the growth in student debt,” Gillespie said. “Republicans think colleges are two ideological, leaning too far left and creating social havoc. Regardless of their political persuasion, both sides tend to agree that colleges no longer prepare graduates for the kinds of jobs that will withstand the tumultuous economic and technological disruptions we anticipate over the next several decades.”

However, she repeatedly emphasized that a significant part of her job as dean of the college, especially as she works with a group of faculty and students on core curriculum reform, is to defend the inherent value of a liberal arts education, which she said is dependent on how Wake Forest defines the liberal arts.

“We searched everywhere, but none of us could find a definition, even though the phrase ‘liberal arts’ appears in our mission statement, in our Course Bulletin, and in all our admissions materials,” Gillespie said.

“A liberal arts education is an approach to learning that empowers individuals and prepares them to deal with complexity, diversity and change,” the review reads. “It is broad and diverse, fostering a dedication to the open pursuit of knowledge, while providing learners with an example of the world they will be called upon to lead … Ultimately, [it] facilitates how students see the world … from a multi-dimensional standpoint while also acknowledging wider contexts, experiments and perspectives.”

Gillespie said that this definition, along with input from students and faculty, will continue to inform potential changes made to the core curriculum.

Junior Francisco Martinez said that he concurred with Gillespie’s definition of the liberal arts and the importance of having a well-rounded education. “We are getting more and more into a globalized world,” he said. “The jobs around now weren’t around 15 or 20 years ago.” Education, he said, should change with the changing world and job market.

A question-and-answer session followed Gillespie’s lecture, in which students expressed the value that they placed on a liberal arts education when they decided to come to Wake Forest as well as expressing worry for how the liberal arts are popularly viewed.

Concerns voiced by the students included the notions that Wake Forest is not preparing students to be advocates of their own liberal arts degrees, and that students view fulfilling divisional requirements as checking boxes, especially those with a predetermined idea of what they wish to study.

“The discussion after the lecture was fantastic, a real joy to see,” said Finley. “How wonderful it is to have students, faculty and the dean engaging … I had several people come up to me afterwards and say … because of the talk, they thought about an aspect of the liberal arts that they had not previously considered. That was amazing for me to hear.”