“A Quiet Place” Utilizes the Power of Silence 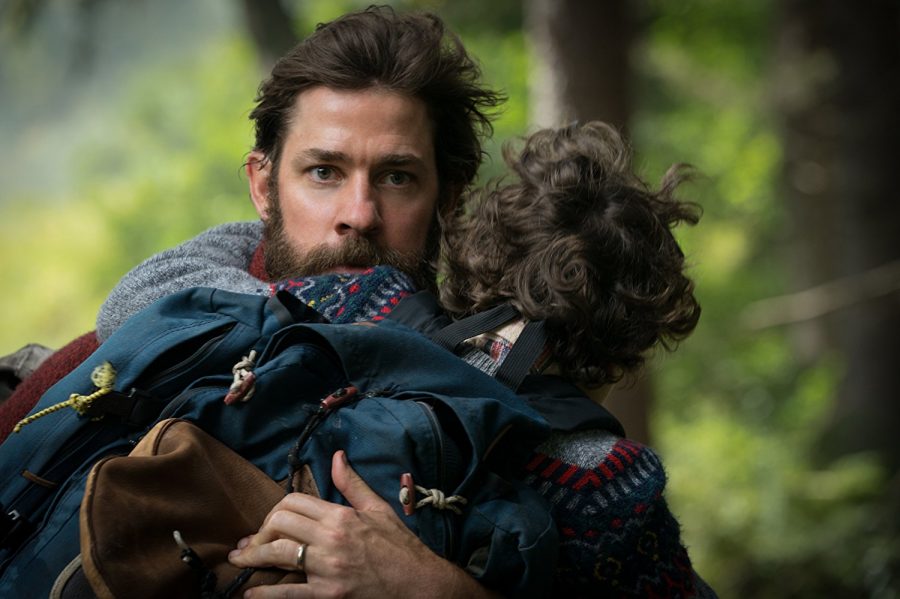 The endless deluge of slasher-garbage and prurient genre fodder makes the climate difficult for someone pitching an audacious, concept-based horror film. Audiences have come to expect next to nothing from horror. Minus a small group of genre-junkies, who look for and root out meritorious films, even the nuanced horror film resonates with mass audiences only on a superficial plane. In some ways, horror movies of the popular kind have begun to mimic culture at large — narrow-minded, routinized slogs that relish the cheap thrill and willfully ignore the preciousness of the medium (film, life).

But A Quiet Place, the new horror film starring John Krasinski and Emily Blunt, is no churned-out, pea-brained slasher meant to attract flippant, Friday-night spenders. It is a unique and serious concept-film, powered not by nudity and nastiness, but by originality and execution. The film is nearly a silent one, an idea that might as well be a box-office death-wish when pitched to modern audiences, but it shows its virtuosity from the start.

Krasinski and Blunt head the Abbott family, a unit under siege, in a post-apocalyptic world where even the slightest sound initiates a horde of blind, alien creatures, whose acute sense of hearing allows them to pinpoint their prey in a matter of seconds. Through sign language and gestures, the Abbotts navigate the world of howling winds, running waters and soundless humans. The film opens with shots of an eerie, tumbleweed city, reminiscent of the first few minutes of 28 Days Later. But A Quiet Place doubles-down on the emptiness of the post-apocalyptic world, showing that in a fallen world, survival directives, what in other films seem from the vantage of this one to be verbal insignificances, can be communicated soundlessly.

There are a few close calls in the beginning of the film, and eventually we are shown just how devastatingly quick the alien creatures jump at any dribble of sound, when the youngest Abbott child turns on a toy air plane and gets his guts ripped out in seconds. After this jarring episode, the alien’s mostly invisible presence for the first half of the film soaks the audience in terror. (I felt, watching the film, that if I were to make a sound, I too would be besieged and dragged out the emergency exit in tatters). Blunt’s character is (somewhat implausibly) pregnant, and the Abbott family “settles” in a house amidst an expanse of cornfields. Sound, though, seems a moribund inevitability. Blunt’s pregnancy cleverly looms like a death-sentence over the entire film, as if the characters and the audience know it is impossible to go through childbirth without a peep, and to rear an infant without them wailing at the air every two seconds.

Because the plot is so easily summarized and understood, the artistic merits of the film leave themselves open to be critiqued and witnessed. Luckily, there is much to be lauded. Krasinski co-wrote and directed this feature, as well as acted beside his real-life wife, Blunt, and I must say I would watch Krasinski dice cheese. In this film especially, about a family reduced to simple, earthen existence, Kransinski exudes the ur-humanness we have grown to love about him. He has a hoi-paloi-ishness that is so endearing you feel bad critiquing his acting, because it is less like artistic difference than personal shaming. Any critique levied against Kransinki the actor seems a critique against Krasinski the man; his profession and the way he professes are ineradicably human, like a Greta Gerwig or a Kristen Stewart or a Casey Affleck, so much so that he feels emotionally one of us. Of course, this is Krasinski’s tremendous acting ability, not his actual averageness, and I hasten to make the point that his quotidian displays are far from attainable for any average man. I do not wish him to be literally related to the layman, I just wish to lionize his ability to make it seem so.

Blunt is also excellent, although she brings more of a natural look of star-power to the screen, perfect and inequivalent to Krasinski, which makes the two all the more at-risk and worth preserving. Blunt is committed to survival, and she allows the audience a window into her tidal of suppressed utterances (she steps on a nail and doesn’t utter a sound, and eventually gives birth in near-silence). The pain she endures becomes supra-human, and it is Blunt herself that we end up admiring for her acute fragility and minutely kinetic portrayal of emotion.

Although Krasinski the actor is enough to draw me to the theater, Krasinski the director executed a wonderfully frightening tightrope walk with A Quiet Place. The camera moves slowly and with purpose, just as the family themselves does, and it is through the dread of a grim pan, or the deliberate monkishness of barefoot trundlings that we feel immersed in this world of silence. Krasinski’s camera is as unique a beast as the aliens themselves, and its eyes move with the consummate knowing of a director using every artistic register. The color red also plays a crucial role, almost in a role of its own, and is staged as a sort of neo-noir-ish threat. It imbues and illuminates moments with shades of lurid blood and incites feelings of danger and ticking time. The mise-en-scenes created by Krasinski look like he has been directing arthouse horror films for years; some of the Giallo directors would be proud. The scenes are subtle and portentous, glistening yet blunted by their efficient message.

The score, by Marco Beltrami, is adequately suspenseful. Tasked with the impossibility of trying to make up for a lack of sound, the music in A Quiet Place tastefully undershoots and relaxes back into a sort of expected sound that actually serves the flim’s maverick concept better than trying to overcompensate for it.

A Quiet Place, although mostly “soundless,” is a full-bodied experience. Watching Krasinski and Blunt navigate their family through a ravaged time reverberates into the real. It seems like something Krasinski himself would do, all hirsute and forlorn in the face of death. And though A Quiet Place is ultimately a portrait of family (Krasinski said in an interview on the Graham Norton show, “it’s a love letter to my kids. [It is about] what extremes you would go to to protect your kids.”), don’t let Krasinski’s sentimentality trick you. A Quiet Place is a fully-sensate, visceral experience. It has moments of vivid terror, with breath-holding and face-scrunching anticipation, and it has moments of vast emotional energy. The genre needs more directors like Krasinski to bring their out-of-the-genre acumen to bear on a somewhat predictable niche of cinema. In A Quiet Place, not only are we shown the horror of horrific things, we are shown the flickers of internalities in the face of what it means to be human. And that is a new and noble thing.