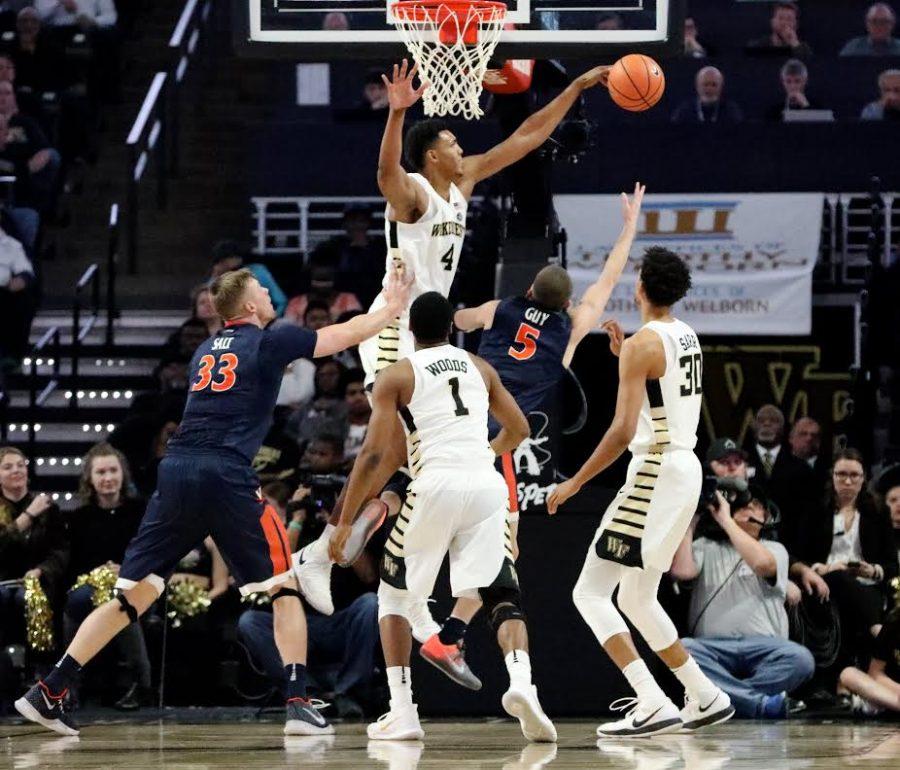 On Tuesday, April 17, Wake Forest junior center Doral Moore announced on Twitter that he will forgo his senior season and enter the NBA Draft, with plans of hiring an agent in the near future.

“I want to thank Coach Manning, the assistant coaches and Coach Horn for their guidance and preparing me to take this step,” Moore said. “I appreciate how they believed in me, stuck with me and pushed me to reach my potential. I developed so much, both as a player and a person, during my years at Wake Forest. I want to thank all my professors and tutors, especially Miss Jane [Caldwell], for pushing me academically and making me a better person. I will miss my teammates [and] my brothers, who shared the good times with me and helped me through the bad times. I also want to thank the Demon Deacon fans that supported us every night and made playing at Wake Forest an incredible experience.”

Moore, a native of Atlanta, GA., had a breakout junior season, averaging 11.1 points and 9.4 rebounds in 2017-18, while leading the team with 61 blocks. The 7-1 center was just one of two players in the ACC to average a double-double in conference play, joining Duke’s Marvin Bagley, who is projected by many to be a top five pick in this year’s NBA Draft.

Finding himself on the receiving end of many alley-oops, Moore gave himself plenty of high percentage attempts from the field. His 68.9 field goal percentage set a Wake Forest single season record.

At one point this season, Moore accomplished something that had not been done in a Wake Forest uniform since Tim Duncan put on the old gold and black in his senior season back in 1997.

He became the first Deacon to have six straight ACC games with double digit rebounds since Duncan, prompting coach Manning to say the following at the time: “Doral is — from where he started to where he’s at — he’s playing really, really well,” Manning said. “He showed a lot of improvement and we’re obviously really happy and proud of that. Still has some steps to go.”

Many have argued since the news broke yesterday that Moore still has some steps to go, and that the big man could have benefited from an additional year under the leadership of Coach Manning.

“We wish Doral the best of luck as he begins the next stage of his career,” Manning said. “We have seen his development over his three years in our program and to average a double-double in ACC games last season shows his potential.

While we are disappointed to see him leave, we are proud that our program has been able to help another player achieve his dream of playing professional basketball.”

While Moore will be missed, the Old Gold & Black thanks him for three years on the court and for his sincere and honest responses in post-game interviews.