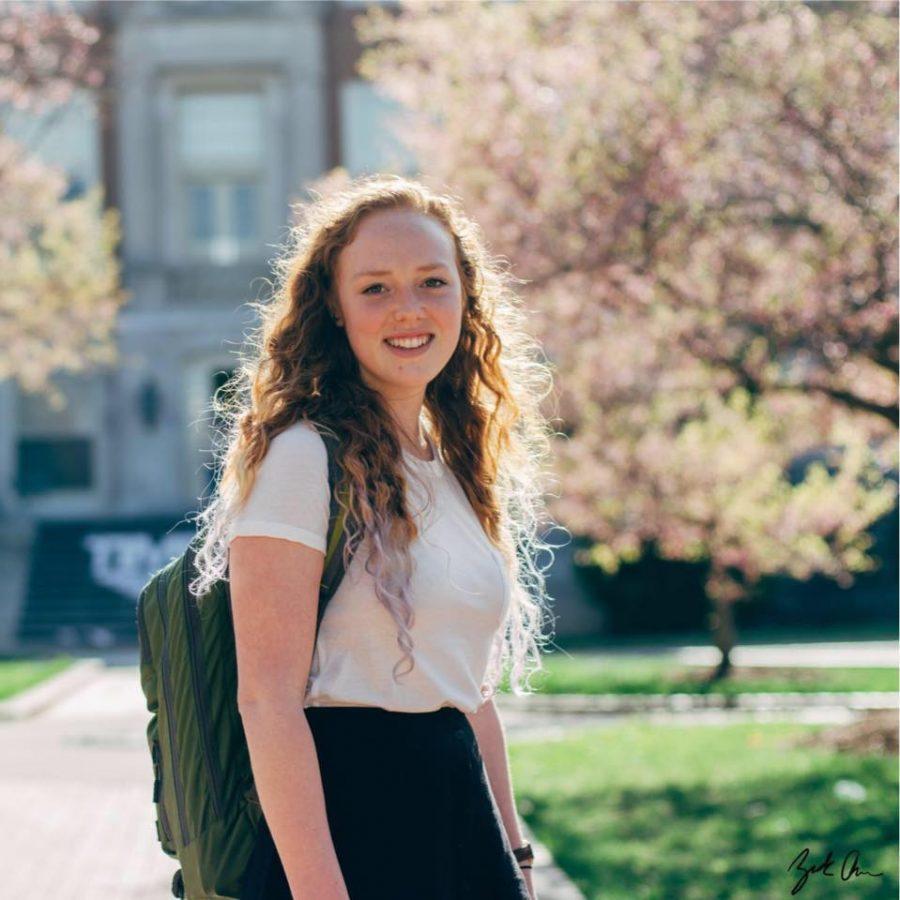 Senior Sebastian Irby will be the first Wake Forest student to graduate with a degree in Sustainability Studies. Irby did so by constructing a unique curriculum for herself through the Interdisciplinary Major program.

Before she graduates, the Old Gold & Black sat down with Irby to discuss the specifics of her program, her experience with a sustainability curriculum and the  future possibility of an official environmental major.

How did you get into sustainability?

I’ve always been into environmental stuff. Freshman year I approached the Office of Sustainability and started getting involved in their volunteer opportunities, like the Sustainability Ambassadors program. Going into the second semester of freshman year, they offered me an intern position. Working with them, I really got to know the staff at the office. Because Wake Forest doesn’t have an environmental major program, I decided I was going to start making my own, which was convenient because the internship that I had was doing curriculum inventory. I went through basically every class that’s ever been offered at Wake Forest in the last 10 years to identify which classes have this information. From there, I worked with the people I had been working with in the office on transitioning into making it my own major.

Did you feel like there were a lot of classes that included sustainability in their curriculum?

Yes, because sustainability is really broad. Some of the music and dance classes include sustainability because they do about a week or two on more environmental themes, and so you get a lot of things like that. However, there’s definitely not a ton of classes that focus on sustainability, but that’s definitely changing and improving.

Did you know coming into college that you were going to create your own major?

I did not. I was hopeful that — because there was a Master’s program and a lot of swelling support for an environmental major — in the time I was here it would develop on its own. But that was not the case. I think it’s on the time horizon for Wake Forest eventually, but I was hoping that it was going to be on my time horizon. It became pretty obvious that it wasn’t going to be, so I actually applied to transfer to a bunch of schools. At the last minute, I decided I was going to stick it out because Dedee Johnston in the Office of Sustainability had told me about this Interdisciplinary program. Having just done all this curriculum work, I knew all the courses really well.

Can you explain what the process was like creating your own major?

With the Interdisciplinary program, you want to attack it as early as you can because you have to submit your proposal at the same time that everyone else is declaring as a sophomore.

The way that the Interdisciplinary program works is you have to find a degree at another institution that you basically map out and work to match as many Wake Forest classes with those classes so that you can map the curriculum out. Then you have to submit a proposal to the Interdisciplinary Curriculum Committee — one professor from all of the divisionals plus one of the deans. You submit a proposal that has a list of all the classes that you want to take, the degree that you’re basing your plan off of, a personal statement and recommendations from professors. It’s very, very time-consuming. It is very hard and very stressful.

What does Sustainability Studies mean to you?

I get this question all the time; I really should have a better answer for it by now. (Laughs). The primary reason that my major is called that is because I based my major off of a program at Arizona State and their program is called Sustainability Studies.

It seems like most of the classes for an environmentally-focused major would be science classes. Are there any classes that people would be surprised to find out that you took for your major?

The science part is interesting because we don’t have any actual Earth science classes, but there’s obviously things you can take in biology, physics and chemistry. I personally chose to have a strong science foundation because climate change is one of my priority issues, so to work in that I felt like I needed a strong foundation. I took the first few years of chemistry, biology and physics. I would say that people after me feel differently. I know one girl who just submitted [a proposal] who is trying to avoid science like the plague; she’s much more into the humanities.

I would say there’s at least one solid class in every department that deals with the environment. In anthropology, there’s Culture and Natures. In the humanities department, there’s Humanity and Nature. There’s a religion and ecology class. In every department, there’s one very obvious class like those. Then there’s also, depending on who you take certain classes with, classes that teach American literature and incorporate more environmental things into their curriculum.

I personally worked with three professors who I knew I was going to have and they let me change what my final project and midterm was going to be. They might assign a topic to the rest of the class and I would take that topic and find a way to tie it into the environment and sustainability. That way in the future, if someone’s like, “you made your own degree, so how is this class you took in global human rights and social justice relevant?” and I would be able to answer, “oh, well here is all the research that I did in that class.”

Looking back on four years, what was your favorite class you’ve taken?

That’s a hard one. I’d say Culture and Nature, which is in the Anthropology department with Dr. Thacker. That’s probably one of the best classes I’ve ever taken.

What was that class about?

It talks about how culture has changed over time and then specifically you look at environmental themes. You go back to the beginning of civilization and how people interacted with the environment at that time and you trace that theme up through today. [Thacker is] a really awesome professor. Before I took that class, someone told me that it would be the best class I ever took at Wake Forest. I took it and was like, “Oh, they were so right.”

Do you feel that there’s a definite need or desire on campus for a concrete environmental or sustainability studies program?

Absolutely. Proposals for that major have been submitted to the administration several times.

I don’t necessarily think that they don’t want it, I just think that they have other priorities. We can’t just hire 20 new professors and start three new majors. I understand that it’s been really slow to get the ball rolling. Definitely in the time I’ve been here, they’ve started to offer more classes, which I think is really positive. I definitely think that there will be a major in the next five years, at least I would hope. I see [that need] in how many people I have worked with and in trying to develop these Interdisciplinary degrees.

I also think that a lot of people don’t realize that that’s something that they might want because they don’t have access to it. I have a friend who is a biology major and got exposed to a lot of the coursework I was working on. She was like, “holy shit, why was I ever a biology major, why didn’t I know about this?” It’s because there’s not a lot to know about this — there’s not a developed major program.

Do you see yourself as a trailblazer almost for the future of this?

Yeah, I do, and it sounds really pretentious to say that. (Laughs).

Someone had to start it.

Exactly! Every spring there’s a Champion of Change award that the Office of Sustainability helps put on and last year I got the student leadership award for helping students with this program. A lot of the people I work with really thank me for how much grunt work I put in being the first person. It makes it a lot easier for people now because, even though it’s still really an extensive list [of classes] they have to look through, they don’t have to sort through that list within something else. There are hundreds of classes you have to look through, but now you can CTRL+F or they’re organized by department. I also think that having someone to help you and talk through it is really useful. No one helped me at all. Dedee, like I mentioned, was my mentor and she did a lot of work with me, but I didn’t have any student contact that had gone through the process before. It’s not a handholding thing. It’s very self-starting, self-motivated.

What are you doing after graduation?

That’s a good question — I don’t know yet. My hope is to be in D.C. doing environmental policy. I would like to be working in either climate change or renewable energy, because those are two things that I really care about. Fingers crossed. I have a lot of applications floating around in the void that I’m waiting to hear back on.

Not just in terms of curriculum, but what are your hopes for a sustainable future for Wake Forest?

(Whispers). Gosh, there’s so many things.

It’s interesting because in working for the sustainability office, you really learn how institutionalized things are. The school has always said, “we’re a slow moving democratic process,” and that is really the most true thing in the whole world. It is so hard to get things changed. It’s not necessarily for a lack of will, although I do think that the enviroment is just not a priority on people’s minds here, but it is just a lot of work. My vision moving forward is for the people who are passionate about this to be louder with their voices. When you don’t necessarily hear a push for these things, you don’t see them happen. At the same time, I would like the school to take initiative on these things on their own without that having to happen, because it’s a two-way street.