Prague is a City Worth Exploration 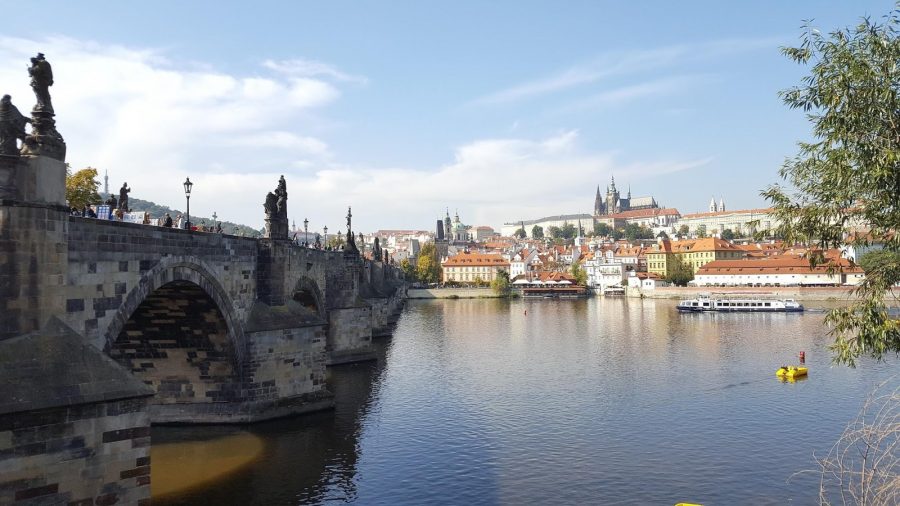 A few names immediately come to mind when thinking about the most beautiful cities in the world: Paris, London, Venice, Florence and maybe a couple others. But Prague, in my opinion, rises above all others in its beauty, its elegance and its charm. It is a place that is utterly unique, with a rich history and a look that is distinctly “Prague.”  It is quintessentially European, fitting that fairy-tale image of a medieval city, with its towers, churches, old houses, market squares and little streets, all surmounted by the largest castle in the world. Who could ask for a better vacation spot?

Prague is a city that one can explore with no particular plans in mind. I was perfectly content wandering through the narrow streets of the old town, passing through seemingly-forgotten courtyards, walking through old palace gardens and climbing up the steep hills near the castle. Unusual things are found in this way. For example, there is a church in which a severed, blackened arm hangs from a meat hook stationed above the doorway. According to a local legend, this is the arm of a thief who, trying to steal jewelry from a statue of the Virgin Mary, was caught in the grip of the (miraculously animated) statue, which would not let go of his arm until it was amputated by the local executioner. The statue then let go of the thief, his just punishment received.  The unusual things like this make the trip memorable. I recommend joining a free walking tour so as to not miss the most hidden places.

The sun sets over Prague in a most wonderful way — the whole city is bathed in deeper and deeper yellow light until darkness sets in. The shadows of the Gothic and Baroque towers that dominate the sky slowly grow longer and cover the streets as night falls and the darkened city is crowned with a gleaming castle. It is a sight incredible to behold, and easily makes Prague worthy of being called the most beautiful city in the world. No other city that I have visited has such a unique color that suffuses everything – it is almost as if Prague is viewed through a filter at all times and the charming, uniform architecture makes the whole thing look like a movie or a painting (note on paintings: Prague is not the best place for art museums).

If you are looking for a romantic and beautiful place to go this summer and haven’t already been to Prague, definitely consider visiting. Prague is a rare example of an intact European city from before World War II; furthermore, it has not been heavily rebuilt or remodelled like Brussels or parts of London. These attributes make it a valuable artifact of world history, in addition to being beautiful and romantic. Like the other great European capitals — London, Paris, Vienna and Berlin — Prague displays the best its country has to offer. Like those other cities, it is an irreplaceable treasure.