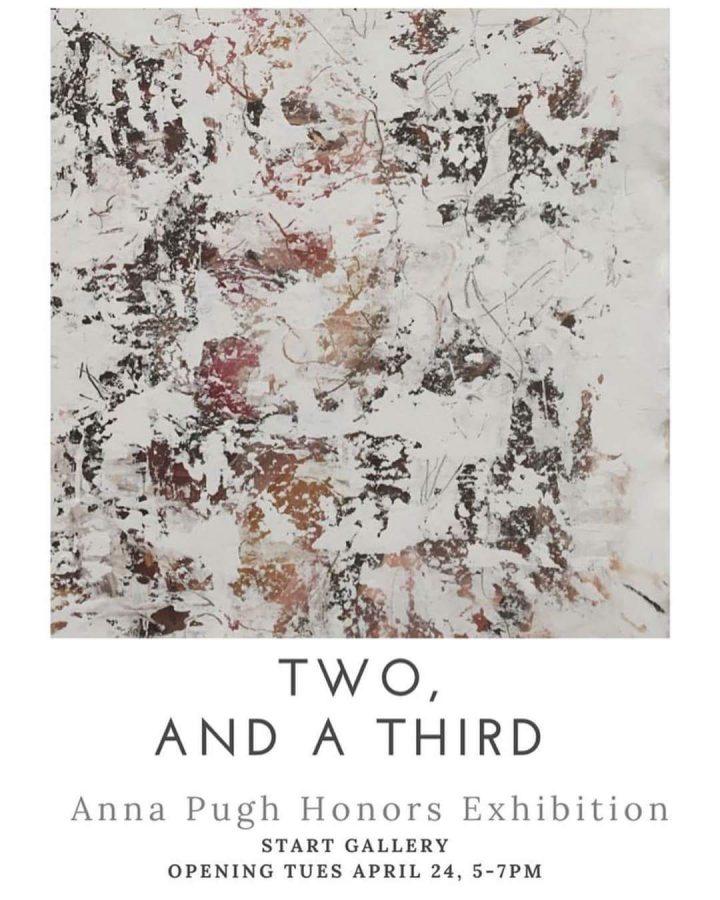 Two, and a third is the Honors in Studio Art presentation of senior Anna Pugh, on exhibition now at the START Gallery in Reynolda Village. Pugh is a Mullen-Carswell, Eleanor Layfield Davis and Reifler Family Scholar who has also been shown in past START Gallery exhibitions as well as student exhibitions at the Charlotte and Philip Hanes Art Gallery in Scales. In Two, and a third, Pugh works in both watercolor and oil paint as the collection explores the human body in various degrees of hiding and revealing. A third collection in charcoal helps to explain the artist’s themes and treatment of the body in her collection of paintings. In this column, Pugh explains the creative process and inspiration behind Two, and a third.

Describe your process in creating Two, and a third.

My process for making artwork involves both asking questions and trying to answer them visually, but usually through creating something visual that will begin to bring up even further questions.  That’s one of the issues I’m tackling with Two, and a third:” how one artist in one given period of time trying to ask the same question with artwork can still create a multitude of seemingly different bodies of work, when in fact they are joined through this process, this questioning and the creation.

This exhibition, in its format, comprises two bodies of work, joined and reflected through a third.

These two bodies were discovered through one process and are wed with what questions they ask, though they approach their questioning in a different way. Five charcoal drawings make up the bridging “third body” of work. In them, two women interact in ways which display both vulnerability and protection to each other and to themselves. They, in many ways, begin to manifest the two other bodies of work in their formality, concept, and relationship.

What does Two, and a third mean to you?

If I’ve taken art and put it out for display, that’s a sign that it is meaningful to me and it’s something I want to share so that maybe someone else may find meaning in it as well.  With this project in particular it feels really special because I had time to really develop ideas that I had been holding back on, and I feel as if I’ve grown as an artist through it. The work in this exhibition arose as my response, my way of dealing with, grappling with and exploring events in my personal life as well as the greater world. It’s also my last show as a senior which makes it feel like my four years here have culminated into something meaningful.

What are your plans with art after graduating from Wake Forest?

After I graduate I plan on working as an artist and in other areas of the art industry.

Two, and a third will be shown at START Gallery in Reynolda Village until Friday, April 27.