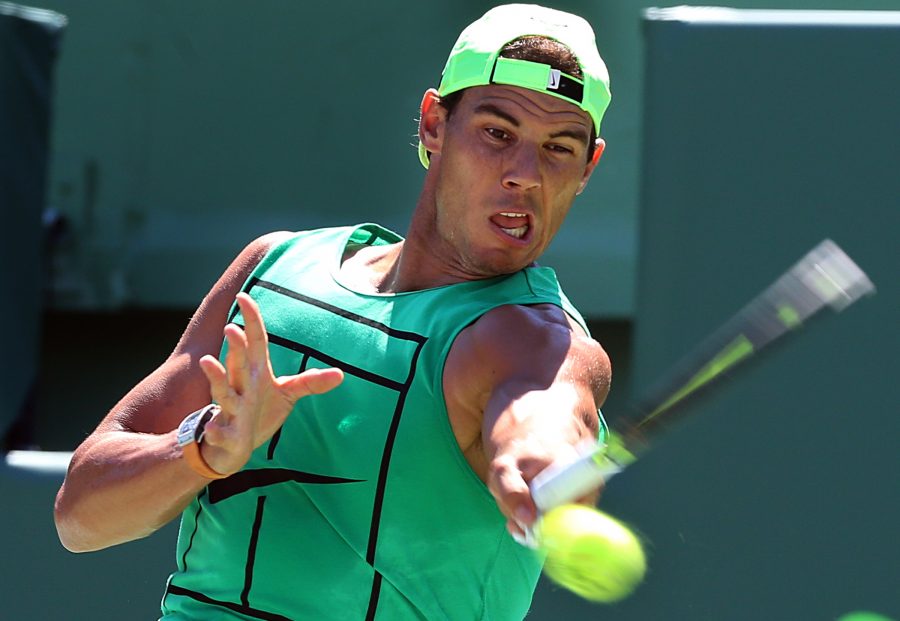 I closed my last column, about the Monte Carlo Masters 1000 and Rafael Nadal’s illustrious place in it, by saying the Spaniard may have to battle age more so than in years past. I said that although he may be defeated on the grounds of an eroded body, he would come out as fervent as ever. I was right about the latter, but I was proved largely wrong by Nadal’s overall performance. Without dropping a set, without losing more than four games, Rafael Nadal dispatched opponent after opponent. He remained a piece of perfect human machinery, physically tuned and mentally limber, able to seamlessly adjust to adversity and maintain an (expectedly) unconscionable paradigm Nadal himself created.

As if in near defiance, Nadal’s outfit of choice for the tournament was a sun-kissed orange shirt and headband, which simultaneously blended him into his favorite earthen-surface, while also making him stand out as some sort of solar concentrate. He was both sprung from, it seemed, and the indomitable king of, the baked clay of Monte Carlo.

In the final, Nadal played Kei Nishikori of Japan, who unfortunately looked to be the movable object in some sort of teaching drill, meant to simply return all the balls he could while his partner learned to hit complex geometric shapes, moving and shaping the balls into corners, short and deep, and finishing the point at will. The final score favored Nadal, 6-3 6-2, and Nishikori, usually a storm to be weathered, with a bullet for a backhand and elastic court coverage, seemed stunned by Nadal’s aggression. Even if one were to watch a simple highlight reel of the match, it would quickly become evident that Nadal was pushing Nishikori around. To use the cliché, Nadal had Nishikori “on a string.” This string-theory is even more visually apparent on clay, since the surface can be devilishly slippery and spin-oriented, attenuating the scurry of the opponent into a work that nears some sort of abstract art. It would be interesting to see a track path post-match. It would probably resemble something near to the sketches of a scientist versus that of an insane person.

Nonetheless, Nadal’s dictation never seemed remotely close to brinkmanship. He always stayed within the confines of the attainable (for him). It was not some sort of transcendental performance, one akin to the Federer/Nadal matchups of old, but was the sort of business-as-usual performance that leaves one in even greater awe. We know Nadal can attain a level that deems all humankind obsolete. But to see how his in-form but not out-of-human-form performance in Monte Carlo routinely dominated opponents is a sight to savor, precisely because for Rafael Nadal, it is not a sight at all.

Let us pause and ponder such a statement: routine domination. A working definition may be that the person, as a matter of daily life, much like one would eat or drink, suppresses or actually erodes the opposition in such a way as to categorize the performance as completely one-sided and almost inconceivably consummate.

This, keep in mind, is also with respect to a crop of the most fundamentally-sound, naturally-skilled tennis players to walk the Earth. It’s Jordan, it’s Woods, it’s quite nearly Roger Federer.

For any pantheonic athlete, descent can be quickly noticeable. It can be either a steady, long-time exercise in denial (or monetary incentive. See: Zlatan Ibrahimović, L.A. Galaxy), or it can be a perhaps more apt severance, a crowning achievement followed by retirement. With Nadal, it seems we may never know when he will begin his descent. The more we doubt, the more he proves his resilience.

And that’s the third option with great athletes. Sometimes they just keep on going.