Wendell Dunn Makes a Difference Off the Field 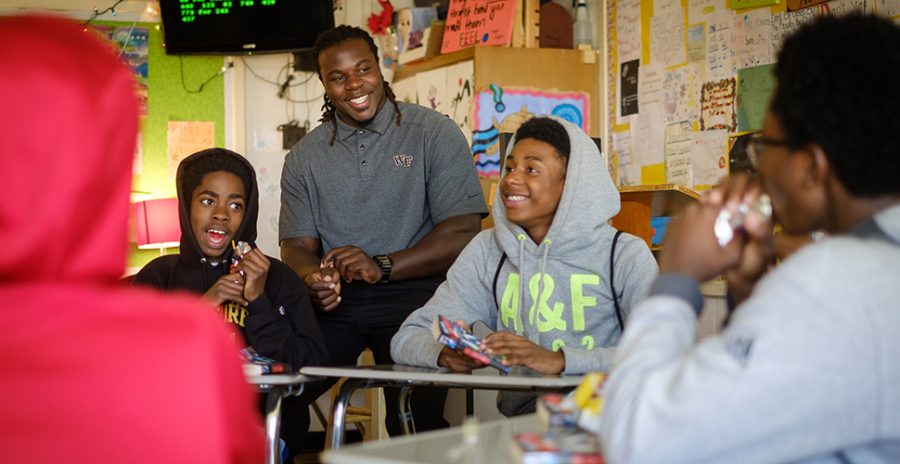 Wendell Dunn is celebrated by most people as the two-time captain and four-year starter of the Wake Forest football team who played an integral role in changing the culture and direction of the program. But for a group of local 13 and 14-year-olds, he is known as a mentor and friend — someone who believes in them and in their potential for success.

For two years, Dunn has teamed up with Wake Forest education professor Alan Brown to lead an after-school sports literacy program for students at Paisley IB Magnet School in Winston-Salem, leaving behind a legacy that extends far beyond BB&T Field.

The program, which meets once a week, has been an opportunity for boys in need of extra support to connect with a mentor who relates to the struggles many of them face both at home and at school. To begin each Thursday afternoon, Brown and Dunn pass out snacks and initiate conversation through an “accountable talk” session where the boys have the floor, responding to a few questions about how things are going in their lives, at school and of course, with sports.

For Dunn, this is an important part of his weekly visits, especially since he sees a lot of himself in the boys participating each week.

Dunn recalls that when he was in middle school he failed to take school seriously, and that it took someone who was patient and worthy of earning his trust for him to realize his potential.

“I had a lot of mentors, but when I talk about the person that helped me change my life I usually talk about my eighth-grade science teacher, Jen Borton, who is now the person that I call mom,” Dunn said. “She was willing to help at all costs and she showed love.”

For Dunn, earning the trust of the boys was imperative, which is why he chose to commit himself to the program as a regular leader.

“I told Wendell he had two options, he could come by from time to time or he could put some time in and come each week,” Brown said. “He chose to join me each week and has matured as a leader and a teacher.”

Dunn recalled that when he first met with Brown and learned that the literacy group would consist of eighth-graders, he knew he had to commit to it weekly, that it was a sign from God for him to work with youth that were of the same age he was when he found a mentor in his eighth-grade teacher, affectionately now known to him as Mama Jen.

Just as it required patience from Mama Jen for Dunn to trust her, Dunn recalled that it took about two months for the boys to trust him, and that once the trust was established, only then was the group willing to open up about issues going on in their lives.

Meaningful dialogue was not restricted to the informal “accountable talk” sessions, however, as the group spent most of their time together reading one of Brown’s hand-selected young adult novels.

Brown, who researches secondary teacher education, has found that the intersection of sports and culture within young adult literature has the opportunity to create readers out of students who may otherwise have little interest in picking up a book — and one of the first books the group read was The Contender by Robert Lipsyte of The New York Times.

The group read Lipsyte’s book — a novel about a high school dropout that learns discipline through boxing — and eventually decided to throw the book a 50th anniversary party, an event that required the boys to take ownership of its planning and organization.

With the support of Paisley Middle School teacher and Wake Forest graduate Bailey Allman (’15), Brown and Dunn were able to help the boys pull off the celebration. Faculty and friends gathered to watch the boys take turns standing in front of an audience, read their favorite quote from the book and explain why it had meaning to them in their lives.

“All of our boys killed it,” Dunn said of the event. “They nailed it. Robert Lipsyte was happy, we had faculty there and some of them cried because they couldn’t believe that these boys enjoyed this book and that it impacted their lives.”

Another proud member in attendance watching this day was Lipsyte himself, who claimed that the party was one of the “all-time greatest experiences” of his life. Lipsyte has been an observer of Dunn and his development over the past two years, working with the boys in the literacy program.

“He has a wonderfully easy way with these kids,” Lipsyte said of Dunn. “He is somebody who was once like them and has now gone on to do great things. He is a terrific human being.”

Lipsyte has not been the only one watching Dunn’s development as a leader. Wake Forest football head coach Dave Clawson had much to say about what Dunn has meant to his program and to this community, claiming, “Wendell has the ability to relate to everybody, whether that be underclassmen, upperclassmen or whoever. He has a unique ability to relate to other people. He is genuine, warm and has a sincere concern for other people.”

Dunn leaves behind a legacy unlike any other at Wake Forest. His school record of 50 career starts for the football team is second to none, but so is his embodiment of the university’s motto, “Pro Humanitate” — which for Dunn means “putting others before oneself, doing things that probably won’t benefit you in any way, shape or form, but just doing it because you know it will help others.”

If Dunn were to have it his way, his legacy would be defined as an example to others that no one stands on too high of a pedestal to feel like they shouldn’t have a responsibility to help others, if given the opportunity.

For Clawson, Dunn leaves behind a legacy of leadership.

“Wendell was a proactive leader. He was a giver, not a taker. Anything he did he did with others in mind. He is one of those people that I see myself being in touch with in 20 years,” Clawson said.

As Dunn looks to the days ahead, he recognizes that his future is bright.

“Right now I am enrolled in grad school — and I am also training to go to the NFL. That’s my dream. That’s where I am going. I’m probably not going to get drafted but I’ve always been an underdog so that doesn’t matter to me,” Dunn said. “I’m going to get on somebody’s roster. I have an agent and everything looks good. But let’s say something goes wrong and the NFL doesn’t work out; I’m already in grad school here and Dr. Alan Brown has said that I can always come back here and finish.”

For Lipsyte, he sees Dunn as a teacher one day, just as soon as his days playing in the NFL are over.