Reflecting on Four Years at the OGB 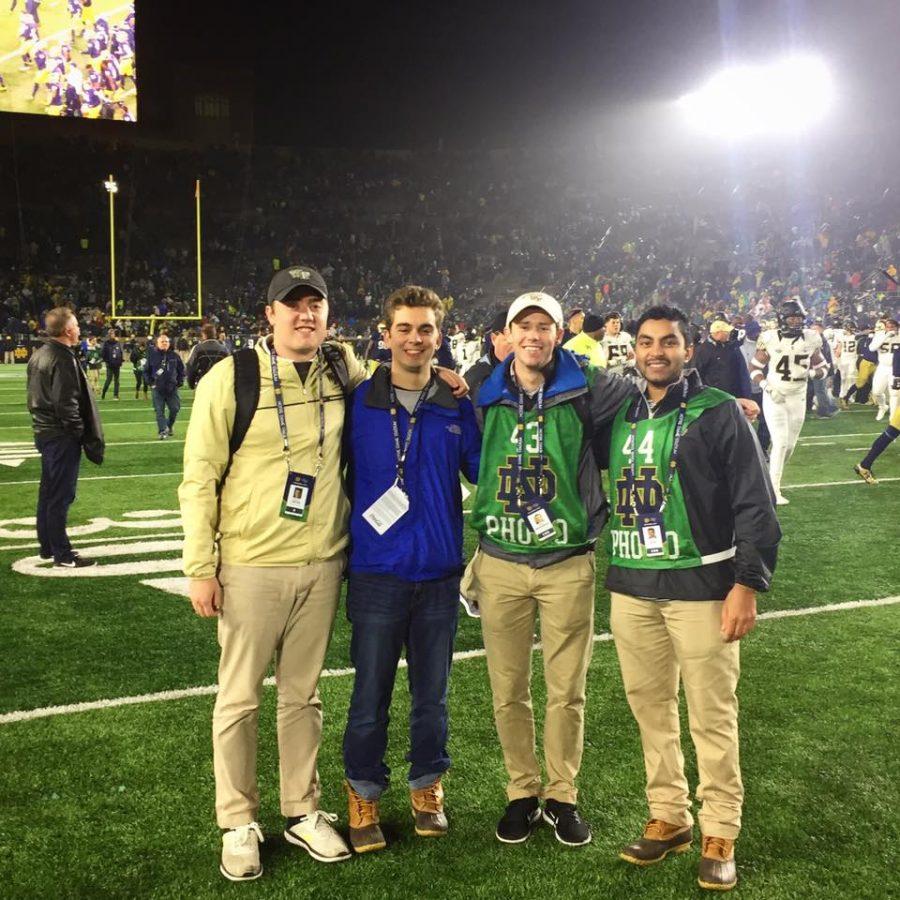 My fascination with college newspapers began as a kid, growing up visiting UNC Chapel Hill for football and basketball games.

Picking up a copy of The Daily Tar Heel became a habit and the reading of stories important to a collegiate campus instilled in me a curiosity for anything college related.

So when I was accepted to my number one choice, Wake Forest, I was excited to get involved on campus, but really had no intention of joining the Old Gold & Black. I had many academic interests and knew that I would likely lack the time to take journalism classes, which I thought would be a requirement for getting involved with Wake Forest’s student publication of more than 100 years.

But when I stopped by the OGB’s table at the activities fair I learned that joining Wake Forest’s student newspaper could be a great way to make friends and get involved.

I will never forget meeting fellow editor Ryan Johnston for the first time, joining him in attending Wake Forest basketball’s media day to interview Codi Miller-McIntyre, Devin Thomas and coach Danny Manning as a preview for the 2014-15 season, the first of the Manning era.

Later in the year, as I continued to edit the Sports section, I was given the opportunity to cover the ACC Tournament. Sitting courtside and conversing with writers from other schools showed me just how lucky I was to attend a school like Wake Forest. “So let me get this straight, you are a freshman with no intention of pursuing journalism long-term, and you get to cover the ACC Tournament,” they would ask me. “I’ve waited years for this opportunity.”

After having this exact conversation with at least half of the student reporters in attendance at the ACC Tournament I realized that Wake Forest is truly a special place and that writing for the Old Gold & Black could mean having my own four-year journalism career.

It was in that moment that I decided I wanted to make the most of my time with the OGB. In the years that followed I transitioned to leading the Sports section with my colleague, Ryan Johnston, and even spent time as the Print Managing Editor during the year of our centennial volume. Taking on this role as an underclassman, joining Editor-in-chief and fellow sophomore McKenzie Maddox, was a tremendous learning opportunity, especially since it marked the first time in recent Wake Forest history that two underclassmen would lead the OGB. Copy editing each page of the paper as Print Managing Editor meant developing a greater awareness of the events taking place on campus and gaining a wide range of perspectives on campus issues, and reading opinions submitted by students, faculty and administrators representing each facet of Wake Forest. Working alongside McKenzie Maddox gave me the opportunity to become a better leader and taught me invaluable lessons about working as a team and motivating others.

Late production nights became the highlights of my weeks and the friendships formed on the fifth floor of Benson gave me an identity and purpose on this campus.

In my four years writing for the Old Gold & Black I traveled to cover the football team at Notre Dame, Clemson, North Carolina, Georgia Tech and Appalachian State, as well as both bowl games — Annapolis’s Military Bowl and Charlotte’s Belk Bowl. For basketball I sat courtside three years in a row at Duke’s Cameron Indoor Stadium while also traveling to North Carolina, NC State, Louisville, Boston College and UNCC to report on the Deacs.

Some other highlights of my time reporting for the OGB included catching up with former Demon Deacons at three NBA games — two in Charlotte when the Hornets hosted both Chris Paul and the Clippers and John Collins and the Hawks, and a third in Boston, when Jeff Teague and the Timberwolves visited the Celtics the night before the Deacs took on Boston College. As a celebration of our centennial volume and a chance to talk with some of Wake Forest’s greatest athletes, I also had the opportunity to visit Carolina Panthers’ training camp and catch up with Demon Deacon great, Ricky Proehl.

Interviewing some of the greatest coaches and players associated with Wake Forest sports was truly a highlight of my experience with the OGB, but it wasn’t the only one. In 2016 I had the opportunity to dig through our archives and write a piece that reflected on the career of Tim Duncan, following his retirement that summer. Republishing some of the words written about Duncan during his college days, and piecing it together with my own reflection made for one of my favorite articles for the OGB.

One of the greatest honors I had while working for the OGB was helping lead the charge on a commemorative edition for golfer and global icon, Arnold Palmer, who died in 2016. Writing my own legacy piece for arguably the most famous Demon Deacon of all time, while also collecting the reflections of President Nathan O. Hatch and the Wake Forest men’s golf team was the best way to celebrate the life and legacy of our most famous alumnus.

As I reflect on my four years writing for the OGB I realize there are a number of individuals that have made my experience as positive as it has been. To Steve Shutt and Steve Kirkland of Wake Forest Athletic Communications, thank you for being supportive of me and the rest of the OGB. I truly appreciated the way you accommodated my requests, answered my questions and respected the challenge we face of reporting on Wake Forest sports with a limited number of writers.

Thank you to the members of the Wake Forest administration who promptly responded to emails when we were in need of a quote or a quick meeting before going to print with a story. And thank you especially to President Hatch for your willingness to meet with the Editorial Board of the OGB to answer our many questions.

Finally, thank you to each writer and editor at the Old Gold & Black of the past four years — you have become some of my best friends and have helped me grow as an individual.

Although my days writing for the OGB are now over, I look forward to continuing my fascination of college newspapers and picking up a copy of the most recent issue each time I have a chance.

Thank you for the memories, OGB, it’s been a fun ride.