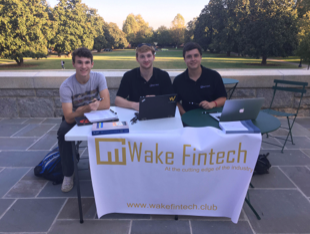 Whether students realize it or not, Bitcoin, cryptocurrency and financial technology (fintech) is on the rise, both on campus and in the real world. Paypal can be used to pay for t-shirts and club dues, Venmo to give a dollar or two to a fundraiser, and iPhone apps to trade stock and transfer money.

One club on campus, Wake Fintech, exists to not only educate students about the ins and outs of financial technology, but also to compete in international trivia competitions, trade cryptocurrencies and host speaker series related to the topic, all while bringing blockchain education to campus.

According to sophomore Rob Michele, the club’s current president, the purpose of Wake Fintech is, “to inspire students to learn independently about applications that are of interest to them … and to learn about the fundamental value of blockchain as a data tool.”

Last year, they won the international Blockchain Trivia Competition, hosted by Blockchain Enterprise Network (BEN), and beat teams from MIT and UC Berkeley in the final rounds. This year, they are one of the main forces behind organizing the competition.

In addition to creating the website for the competition and coming up with the individual trivia questions, the club has been working closely with BEN to recruit participants, aiming for 50 domestic universities and 15 international to compete.

“We are in the process of recruiting clubs to return to the competition as well as getting new clubs to join, as more and more Fintech and blockchain clubs are founded each year,” said the club’s founder and former president, senior Teddy Yerdon.

“This will help establish the Wake Fintech club as a leader in the college Fintech world, and act as a great competitive learning experience for all involved,” junior William Abelt said.

In addition to planning the trivia competition, the club hosts weekly meetings and offers members “Coffee and Crypto” trading sessions on Thursday mornings.

“It functions as a time during which people who execute frequent intraday trades can freely exchange trading ideas, strategies, and thoughts about the market as a whole at that point,” Abelt said, who acts as the club’s trade analyst and merchandiser. Abelt is encouraged by the growth he’s seen in the club over its lifetime at Wake Forest. “We have such passionate and dedicated members for our age who are genuinely excited about the blockchain paradigm shift that is occurring right now. Seeing things like Coffee and Crypto manifest has been pretty cool.”

Next semester, the club hopes to host a speaker series similar to one they hosted last fall, through which speakers from Microsoft, ConsenSys and Storj.io came to campus.

“It’s important to us that Wake Forest is seen as an innovative and cutting-edge university in the eyes of employers and outsiders in general and Wake Fintech has provided us with an avenue to do help that recognition,” Yerdon said.

Last semester, the club was invited to attend several Fintech summits and conferences, including the Benzinga Fintech Summit held in San Francisco.

Next semester, they want to continue educating students and growing their network.

“If you want to make money trading crypto, there is no better first step than coming out to our meetings and educating yourself about what is happening right now in the space,” Abelt said. “If you already do trade, come out, get better, and get more knowledge from other perspectives.”

“In its roots Wake Fintech was designed to help promote a more innovative culture at Wake Forest,” Yerdon said. “If students are interested in the future of the financial industry, have questions about blockchain and cryptocurrency, or, are simply looking for an opportunity to share innovative ideas, Wake Fintech is an excellent resource.”