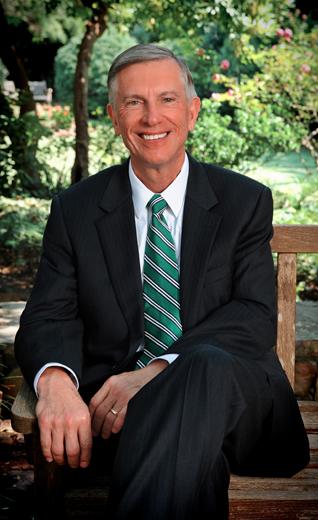 Thomas W. Ross, outgoing president of the University of North Carolina System, confirmed to a group of students on Nov. 3 that he will not run for the U.S. Senate in 2016, closing the door on a possible run against Republican Sen. Richard Burr.

Ross kept open the possibility of running for office in the future, but cited the filing deadline and fundraising realities as the reasons for taking a pass on challenging Burr next year.

“No … not now,” Ross said when asked, noting that he had recently dodged the question when asked by another reporter.

“If you’re running for the Senate, you better raise money,” Ross said. “I can’t do that in this job … and I’m going to stick it out. I have a moral responsibility and obligation to the state.”

Ross, who was speaking to a journalism class on campus after a meeting with Journalism Director Justin Catanoso, was encouraged for months to enter the race after the UNC Board of Governors fired him in January.

Ross declined to close the door on running for office in the future. “I believe deeply in democracy. I want to do something really meaningful,” he said, noting that he is specifically concerned about political reform and environmental issues. “I don’t know what the future will bring.”

The North Carolina filing period to run in 2016 ends on Dec. 21, several weeks before Ross’s tenure at UNC will end. He said he felt it would have been inappropriate to fundraise and organize a campaign while still on the job in Chapel Hill.

Despite widespread praise for Ross, the Board of Governors announced his firing in January — a move that was seen as largely political. Ross was appointed by a board primarily made up of Democrats in 2010; the board’s political alignment has shifted dramatically since then, and it is now made up of almost all Republicans.

Catanoso, also the adviser for the Old Gold & Black, began working with Ross when he was appointed to the board for the Z. Smith Reynolds Foundation and said Ross was “one of the finest leaders in U.S. higher education.”

Margaret Spellings, a Republican and former U.S. Secretary of Education under President George W. Bush, was announced as his successor on Oct. 23.  She will officially assume the role on March 1, 2016.

Ross previously served as president of Davidson College, as a state Superior Court judge and as head of the Z. Smith Reynolds Foundation before that.

So far, three Democrats have announced their campaigns for the Senate race next year: former State Rep. Deborah Ross, Spring Lake, N.C., Mayor Chris Rey and businessman Kevin Griffin. Former Sen. Kay Hagan, who lost her reelection bid last year to Thom Tillis, considered running again in 2016, but announced in the spring that she would not be a candidate.