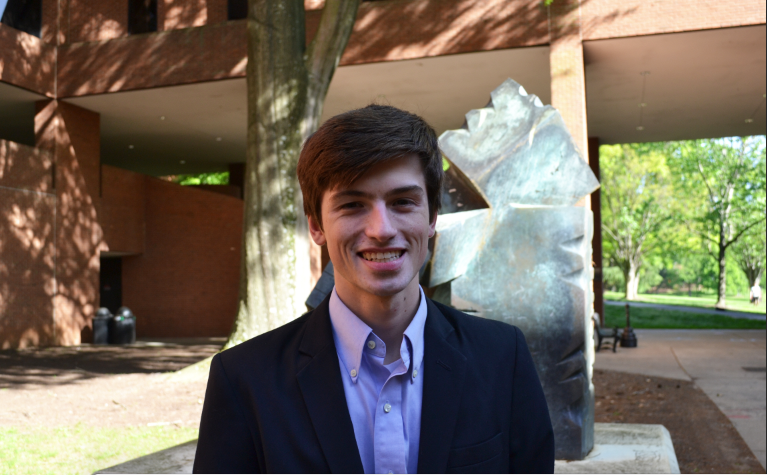 Senior Edward (Ned) Gidley never expected to be an Art History major, however, after he took History of Photography with Dr. John Curley he knew that he wanted to pursue art history.

“In high school I was in the AP [Art History] class, and I had an amazing teacher that prepared us well for the exam,” Gidley said. “I liked art history a fair amount but honestly my first semester I took Dr. Curly for a History of Photography class just as a divisional requirement, but then I sat in that class and realized that this is amazing.”

Gidley knew coming into Wake Forest that he wanted to pursue a degree in history, but art history became a passion he never expected. He will be graduating with an art history and history double major with a minor in classical studies.

Over the next two years, he will be working at Covington & Burling, a law firm in Washington, D.C. However, he hopes to attend law school after he has gained the experience of working in the firm. Gidley’s love for law is reflected in his love for debate. He has been an active member of the debate team all four years at Wake Forest.

Many of Gidley’s fondest memories have come from his time on the team. One memory that stuck out in his mind was of his first summer retreat with the team during the summer of his freshman year. Gidley was nervous to start his first year on campus, however the retreat helped him build lasting friendships.

“I was nervous when I first got to campus, but when I came back after the retreat I already had a group of friends.”

After the retreat, he was excited to begin the next four years at Wake Forest. He first decided he wanted to come to Wake Forest during the August of his senior year. Gidley always thought he wanted to attend the University of Virginia, however, after touring Wake Forest and speaking to Director of Debate Jarrod Atchison and Head Coach of the Debate Team Justin Green, he knew he wanted to come here instead.

In his four years, Gidley learned a lot about himself and he developed the skills needed to be a hardworking student in the Wake Forest community, even discovering who he wanted to be. He knew he wanted to work hard, and through the development of time-management skills and being able to prioritize certain subjects, Gidley excelled during his time on campus.

“Nobody is able to do everything,” Gidley said. “You look at some people and wonder how they’re able to do so much, but everyone is making choices about what they want to do and what they prioritize.”

Gidley feels that the people in the Wake Forest community are what truly defined his experience on campus. He knows that the thing he will miss the most about Wake Forest are the people. Not only his peers, but also those in grades above and below his that he has studied with, as well as his friends who come to support him during debate tournaments.

“Former Wake Forest students came out [to the tournament] and it really meant a lot to me,” Gidley said. “I found out that the connections, the ties, and the bonds that are forged here at Wake Forest are pretty strong.”

Gidley advises that all incoming students should figure out what they love, what they want to do and what motivates them.

“Figure out how much time you need to devote to your major and whatever extracurriculars you do so that you can make sure that you get the most out of these four years,” Gidley said.