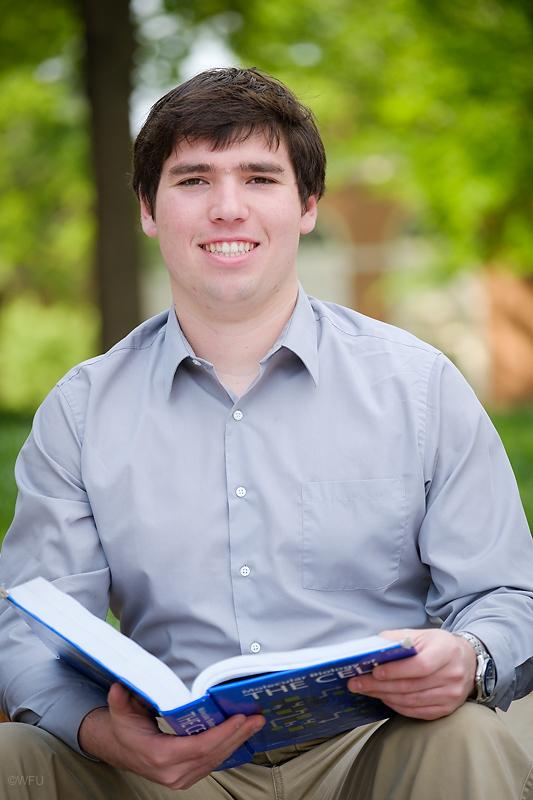 Wake Forest junior David Ostrowski ('18) poses for a photo outside the library on Thursday, April 27, 2017.

David Ostrowski chose biophysics because it was a perfect combination of two subjects that he loved.

“I started college with interest in biology but also thinking I wanted to be a pure Physics major — maybe materials or theoretical physics,” Ostrowski said.

After about a year, he missed studying biology and chemistry,  although he didn’t want to give up the quantitative background.

“Biophysics was the perfect compromise for learning about how biology works from a quantitative perspective,” Ostrowski said.

He added that the biophysics theory and methods class is not generally taken until the end of a student’s tenure and that he enjoyed the opportunity to integrate everything he had learned into one cohesive picture.

Ostrowski also spent the last year working in the lab with Dr. Daniel Kim-Shapiro, a professor in the physics department. There, he looked at different treatments for sickle cell disease.

“That’s a very biological problem, but [I looked at it] using methods based in physics,” he said. Although his findings were ultimately insignificant, he said that it gave him an understanding of how science works. “I have enough experience over my four years to know that it is an unfortunate part of how the process works,” he said.

“Friday evening around 5 p.m. right before spring break, I was walking around the labs and there was David, working away at his experiment,” Kim-Shapiro said. “David is not only brilliant but he is also extremely dedicated. As soon as David joined my lab a little over a year ago, he took ownership of the project and his contributions earned him co-authorship on a paper we recently published. It has also been a pleasure having him in my classes where he has only excelled.”

Ostrowski studied abroad his junior year at the Flow House in Vienna, where he took a complete break from science and studied German literature, history and art for his German minor. He noted that while he greatly missed studying science, it was a good way to reset after two years of nearly exclusively scientific coursework and that it helped steer him towards medicine. “It confirmed that I really do love science,” he said.

Outside of the biophysics lab, Ostrowski was on the executive board of the Wake Forest club ice hockey team starting at the end of his freshman year, serving first as secretary and later as president. He also helped the coach develop a much more competitive program.

“It started as you show up, play and go home,” he said. “But people wanted it to be more.”

The team increased in skill from being capable of making the playoffs but perhaps not doing well to getting to the championship game this year.

Ostrowski noted that one of the things he will miss about Wake Forest will be the freedom to explore a diverse range of academic interests.

“Taking a random history class that I thought sounded interesting was something I never thought I would have done in the real world,” Ostrowski said.

Next year, Ostrowski will develop his research on sickle cell disease by taking a yearlong research job at the National Institute of Health, researching other treatments and drugs and building upon the work he completed as an undergraduate.