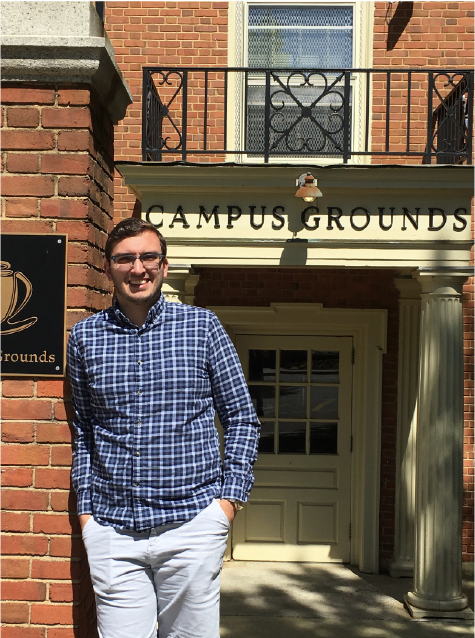 In the dim warmth of what could have been an age-old European coffee shop, I found out Nick DeMayo doesn’t assign his students homework.

“I mostly read with them,” he said. “Research says reading aloud models diction and tone that struggling readers won’t be able to do in their own head.” This is the sort of compassionate current that ran through my entire conversation with him. There exists a sort of gentle roll to his thoughts that makes one want to at once hug and admire the graduating English major’s soft, intelligent patter.

DeMayo is pursuing a graduate degree in English at Georgetown next year, with an interest in disabilities studies, but to say his passion only resides in words on a page would be to limit his panoramic intellect. His real allegiance is to human beings themselves. The intricacies of understanding accommodation and feeling seem to endlessly fascinate DeMayo. With a minor in education, he has been able to teach a tenth-grade English class for four weeks at West Forsyth High School. His fledgling pedagogy is one that seems applicable not only to schools, but to humans in general.

“The act of teaching and reading is always toward the end of having more critical and independent thought,”DeMayo said. “[Becoming] free from those prescriptions of yourself, your class, your race — that freedom, in my opinion, is true human freedom.”

When asked what led to such a compassionate pedagogy, DeMayo said that it is loosely based in a few things: classes and the great professors who taught them, and the tight-knit community he came to establish on campus. The latter was something he had to work at. During the early stage of his tenure at Wake Forest, DeMayo wanted to transfer, but he soon became involved in Campus Grounds and the Old Gold & Black, and found a group of peers that were relatable, kind and provocative.

When it comes to professors, DeMayo seemed to have found his beat a bit quicker, saying that they “understand what you want and what you need from your education here.” This sense of understanding was bolstered when DeMayo took a class with Omar Hena at the Worrell House in London that dealt with multicultural writers.

Not only did the class material itself engender fruitful discussion and confrontation, but the group of students themselves “were so different in the way they handled things … that it seemed to be a microcosm of what we were talking about in the course: how to treat each other.”

DeMayo continued, “I learned that difference is a good thing, that we should celebrate it without being opposed. that’s the model of my life now.”

To define the goal of the English major has been the bane of liberal arts majors for some time. Its perpetual appearance in career discussions and practical applications wears thin for most involved, but DeMayo provided a clearer definition.

“The English major’s goal, I think, is to have students discover something about the human condition though reading literature,” DeMayo said. “I feel, as a result of taking English courses, a bit more accepting, and more understanding about humanity.”

When asked for advice, DeMayo shared: “Read, read, read, as much as you can. Never stop reading.”