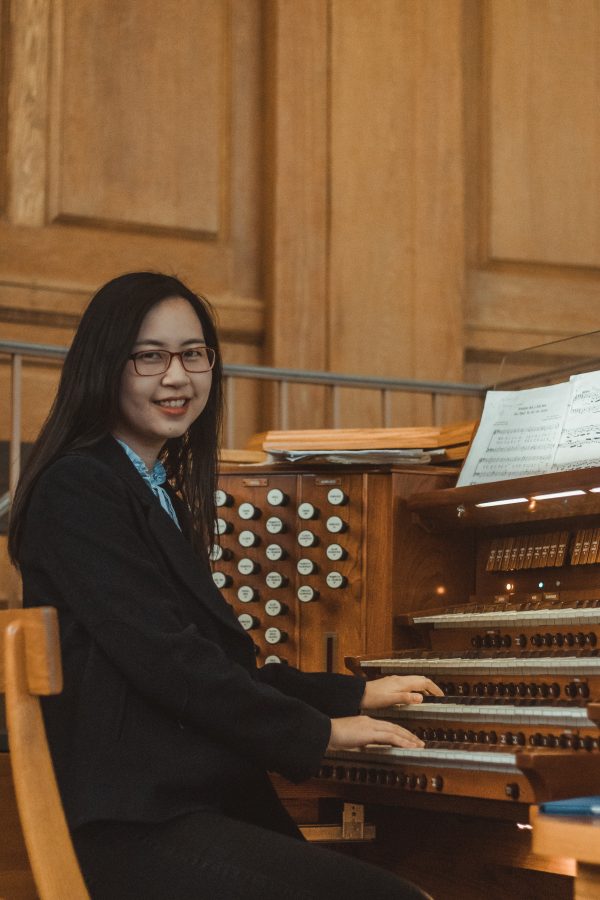 Senior Lucy Zhou didn’t come to Wake Forest to study music; before coming into college, she hadn’t even really thought about what her major would be. However, Zhou did know one thing she wanted to get involved in: choir.

When Zhou was searching for choir opportunities, she found that the music department was very welcoming.

“I saw sheets about signing up for individual lessons [for voice], so I asked,” Zhou said. “The women told me, ‘you have to audition.’ I asked when auditions were, and she responded, ‘you already passed!’”

Later, Zhou was walking through Scales Fine Arts Center and asked a piano professor about individual lessons, and he also told her she could just come right on in. When Zhou meet with Stewart Carter, he surprised Zhou by pulling out a list of requirements for the Music Performance major.

That’s when Zhou thought that maybe this would be the path for her.

“When I was in choir, the first time they did introductions, I figured out that a lot of people were doing double majors,” she said. “That really opened my mind that I could do both.”

Zhou acknowledges that she picked two of the hardest majors: Accountancy and Music Performance. Accountancy has a lot of requirements as does Music Performance, which often caused her to take about 20 credit hours per semester, and the two are completely different. Somehow, she managed to do it all.

“Lucy is quite simply a model student,” Carter said. “Highly intelligent, totally responsible, and a very talented pianist. I don’t believe she ever missed a class nor did she ever submit an assignment late.”

One of Zhou’s favorite experiences in the music department was having to take a series of music theory classes for four semesters, in which they met for one hour Monday through Friday.

“You’re just building relationships in these classes, instead of when you stay for one class and then you just leave,” Zhou said. “You really know the people and you often stay after and hang around.”

Again, by the random encouraging of a professor, Zhou teamed with fellow senior David Yang to perform piano recitals, which allowed her to learn about collaboration.

Even though Zhou loves music, she doesn’t believe she will continue with it as anything more than a hobby. According to her, she had a lot of pressure on her to learn the piano at a young age, but her college professors made music fun again. She fears that high-pressure environment in the professional music world.

“Once you go professional, it’s very competitive and I don’t know if I could get a job,” Zhou said. “I can still love it [as a hobby].”

Further, Zhou has already nailed down her post-graduate plans, as she will be staying at Wake Forest to pursue her Masters of Science (MSA) in Accountancy and has already accepted a full-time job at Ernst & Young, an accounting firm in Houston, Texas, where she interned at the beginning of this spring semester.

Since she was interning at the beginning of this semester, Zhou completed two solo recitals in the short span of a month last semester. She was nervous at first, but gained the confidence to memorize her music and perform on stage.

“[Lucy] is a fine pianist and has a wonderful sense of humor (even laughing at her professor’s puns),” said Professor Dan Locklair.

“In both the areas of music and business, Lucy is a very gifted young woman whose strong and admirable work ethic always ensures that she produces the highest quality results,” Locklair said. “In whatever direction Lucy chooses to go, I predict a very bright future for her and will follow her life and career with great interest.”

Once she finishes her undergraduate career, Zhou knows she will miss the community that the music department creates.

“Every professor is so nice, no matter if I have taken their classes before or not,” Zhou said. “They know all the students.”