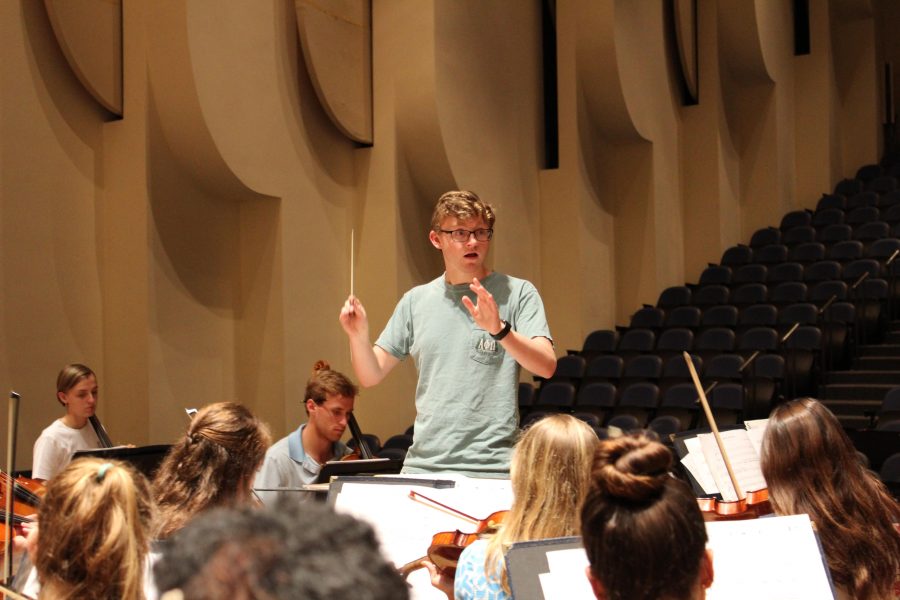 Before coming to Wake Forest, Clay Hamilton played piano and sang in his youth choir, planned to be a science major with no intention of pursuing music in college.

Now, as a Music in Liberal Arts conducting student, music has become a much larger part of his life than he ever would have imagined.

“It’s something that came out of nowhere for me and was definitely a big change in direction, but it’s one that’s helped me grow a ton as a person and be more sure about what I want to do with this next step,” Hamilton said.

After joining Chi Rho, the campus men’s Christian a capella group, and concert choir his freshman year, Hamilton dove further into music. He did research in Vienna related to Mozart and Beethoven, became a conducting student, and, most recently, was music director for the play Spring Awakening.

“[Being a part of the play was] an experience I didn’t expect to have,” Hamilton said. “I don’t know that I could have done that at a bigger school. Professors here, especially in the music department, give students so many incredible, once-in-a-lifetime opportunities to lead projects.”

Hamilton has been the music director for Chi Rho since his junior year, and is thankful for the opportunities they had to record an album in Nashville his sophomore year and to tour in Orlando this summer.

“Clay is one of the most talented conducting students I’ve had during my twenty-two years at Wake Forest,” said Dr. David Hagy of the music department. “He understands a great deal about how to make physical motions to generate qualities of sound from musicians.  I have enjoyed working with him greatly.”

In addition to his study of music, Hamilton is also on the pre-med track. With minors in both biology and chemistry, he feels that music has enriched his understanding of medicine. He has spent two summers doing chemistry research and has run his own lab.

Of the overlap he sees between science and music, Hamilton said, “Medicine is such a collaborative field, and music has taught me to rely on other people. It doesn’t matter if you could sing every part, because you can’t, you’ve got to rely on the people around you. The same applies to medicine.”

A stand-out memory is from when he traveled to Venice and Rome with concert choir, and the group was standing on a bridge at night near Casa Artem late one night. For Hamilton, it was after that trip that he decided to switch his major from biology to music.

“The night was totally silent, which is really weird for a city,” Hamilton said. “There was a really beautiful moment where a couple of us started singing some of our repertoire, and it felt like a very Wake Forest moment: I’m with friends, I’m in a beautiful country, and I’m really grateful to be here.”

Outside of music and academics, Hamilton was a President’s Aide, a member of Alpha Phi Omega and worked with pediatrics at Wake Forst Baptist Hospital studying the impact of arts education on the psychological wellbeing of individuals through a weekly arts and crafts program.

Working as a Wake Forest Fellow after graduation, Hamilton hopes to bridge the sciences with the arts on campus, making Wake Downtown a unique program in the field and allowing other students to experience “the incredible things that are happening over in Scales.”

“Music has been so integral to my growth in both academics and as an individual, and I don’t like to see it be such a small portion in relation to the larger campus community,” Hamilton said.

Although Hamilton will be applying to medical schools in his free time, refinding his original plan, he is thankful for the professors who encouraged him to change his original undergraduate path.