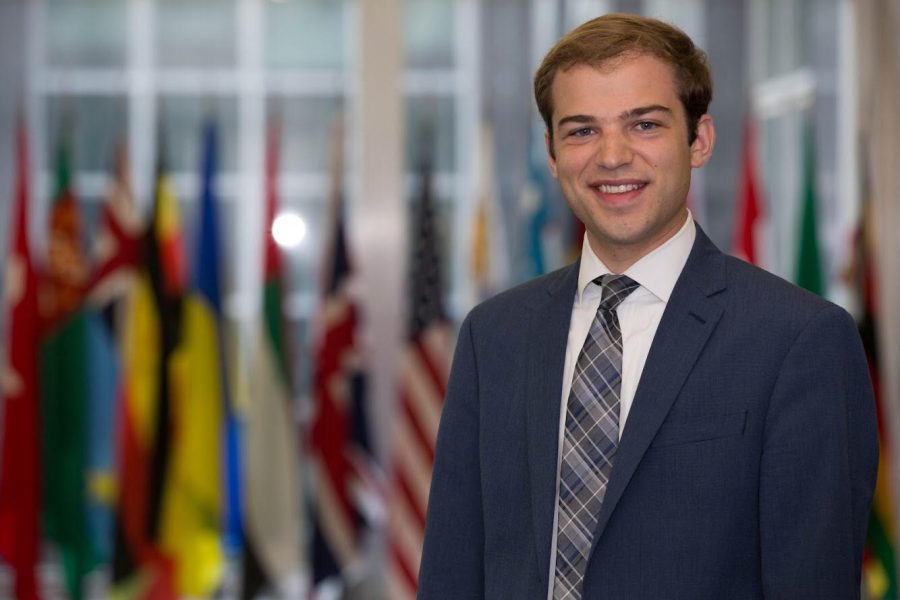 As sports fans follow their beloved teams with uncompromising loyalty, senior Thomas Poston lives and breathes politics — whether inside classrooms in Kirby hall, studying in Strasbourg, France or interning for the State Department in D.C.

“I knew coming to Wake that politics was going to be a big part of my experience,” Poston said. “I was really drawn to the way the department blends rigorous analytic methods with a historical context, and also just had a great experience with the classes my freshman year.”

One of his favorite parts about the politics department at Wake Forest is how it balances looking at politics from a historical perspective but also introduces a more rigorous analytical element.

“Politics is at the intersection of qualitative and quantitative research and the humanities,” he said. “It’s the beauty of the discipline but also a tough balance understanding where your particular research or course of study fits in.”

Poston is an Economics and Politics & International Affairs double major, as he see the two disciplines going hand-in-hand. A member of the Anthony Aston Players, the Ethics Debate Team, Concert Choir, President of Pi Sigma Alpha (the National Political Science Honor Society) and a President’s Aide, Poston fills his time with activities that reflect his passions.

As he has pursued multiple independent research opportunities, he also deeply appreciates the department’s willingness to support student inquiries. After his freshman year, Poston approached the current head of the department, Dr. Katy Harriger, to see if he could turn his internship with the Environmental Defense Fund into a research project and was happily helped.

Later in his academic career, Poston received the Richter Scholarship, an endowed fund that exists to, in his words, “fund student personal pet projects that are of scholarly value.” With this grant, Poston was able to spend time in the U.K. better understanding his otherwise disconnected passions of poetry, nature and political thought. While in the U.K., he visited multiple landmark sites that were important to romantic poets and analyzed them with a multidisciplinary approach from a political theory lens.

“It has been a genuine pleasure and honor to follow his academic journey to date and to converse with him on a regular basis,” said Professor Helga Welsh. “Thomas is a student of many talents; he is, among others, very creative in connecting approaches from different disciplines to shed light on important issues.”

While he balances various time commitments and two majors, Poston also prioritizes giving himself time to relax and reflect on his time at Wake Forest. He sees different spaces on campus as the perfect means of this kind of escape.

“One thing that I’ve loved about Wake, which is a universal experience, is the physical place and the beauty of it,” Poston said. “I’m specifically going to miss Davis Field. It’s a great place to be centered and take a moment to connect with the place. People are an essential part of Wake Forest, but so is the landscape and the beauty.”