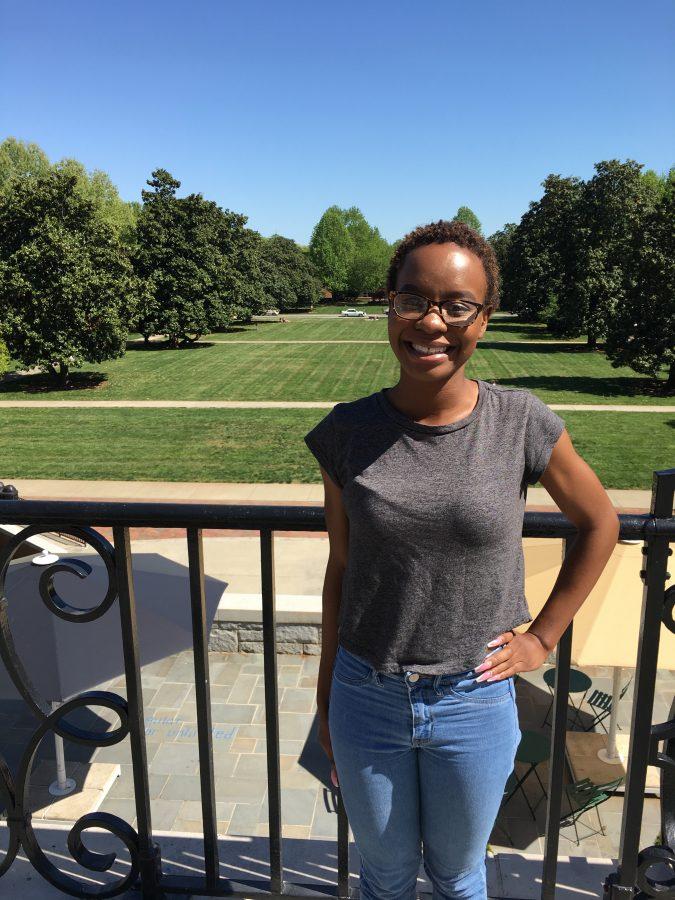 Originally hailing from a conservative background and eventually growing to question specific taught beliefs has been a major part of senior Emmie Davidson’s transformative experience at Wake Forest.

Davidson, originally from Nashville, TN, is a Women’s, Gender and Sexuality Studies (WGS) major, with a minor in sociology. She learned about Wake Forest through a friend of hers who was applying, and ultimately decided to apply herself and attend Wake Forest.

Davidson fell into WGS after taking a course freshman year. “I came across a WGS class … and it required me to go to different events, not just WGS events, and write up papers using critical analysis. From that class on, I thought that this was something I want to do,” Davidson said.

Davidson did not have much exposure to WGS before coming to Wake Forest.

“Throughout high school you talk about some of these things, but it is very surface-level. Here I have been able to get into these hard questions,” Davidson said. “I have always lived in the south, and being in the Bible belt and you are taught a lot of things about sexuality and gender that are patriarchal viewpoints. A lot of the time they are pretty problematic, so getting into a class where I am challenged to think differently has been challenging but very exciting and fun. I am learning new things and getting to questions that I have never thought about, and questioning things I had never thought to question.”

She thinks highly of not only her four years at Wake Forest, but also of the WGS department as a whole.

“The WGS department has really allowed me to shape my own schedule and how I want to learn and research,” Davidson said. “Something that stood out to me is … that with WGS you can take an array of courses. That is really great to me because you can look at gender and women’s issues and sexualities from different perspectives.”

Davidson has been doing research for the past two years as well. “This past year I looked into #BlackGirlMagic and compared it to the Black is Beautiful movement of the 60s and went from there.”

Davidson looked at this specific topic at the Wake Forest Symposium on Gender and Sexuality, which she has participated in for the past two years. “Last year was my first time being involved. I was talking about how transgender individuals, especially transgender people of color, are placed in correctional facilities that they are not supposed to be in,” Davidson said.

Davidson has worked closely with Dr. Catherine Harnois, a WGS professor, over the past few years.

“My time spent teaching, collaborating with, learning from, and laughing with Emmie Davidson has been one of the highlights of my 10 plus years at Wake Forest,” Harnois said. “With her bright mind, creativity, and commitment to social justice, Emmie exemplifies the very best of Women’s Gender and Sexuality Studies, as well as what it means to be a Wake Forest student. Her resilience, positive energy, and generous spirit are contagious.”

“It was a pleasure working with Emmie these past years. I have particularly enjoyed seeing how passionate Emmie is about her work, which she has presented at various conferences and symposia, including here at Wake Forest’s own Symposium on Gender and Sexuality,” Balzano said. “One of the many aspects we all admire in Emmie is her interconnectedness with her peers. Communities mean a lot to her. She is an enthusiastic and hard-working student, a positive thinker, and a fervid advocate for social justice.”

Davidson has had many accomplishments during her time at Wake Forest. She works with Campus Recreation and is a PEER Educator for Alcohol and Drug Abuse Prevention. Both of these experiences have been meaningful for her.

Moreover, she has made many accomplishments with WGS. “Among her many accomplishments, Emmie has presented research at numerous academic conferences, including the annual meeting of the 2018 Southern Sociological Society, as well as the 2018 North Carolina Sociological Association and the WGS Undergraduate Research Symposium,” Harnois said. “In each, she combined sophisticated cultural analyses with an intersectional theoretical framework, and presented her findings articulately and creatively.”

Davidson will be returning to Nashville after graduation and hopes to move to Florida in the near future to work in the hospitality industry.