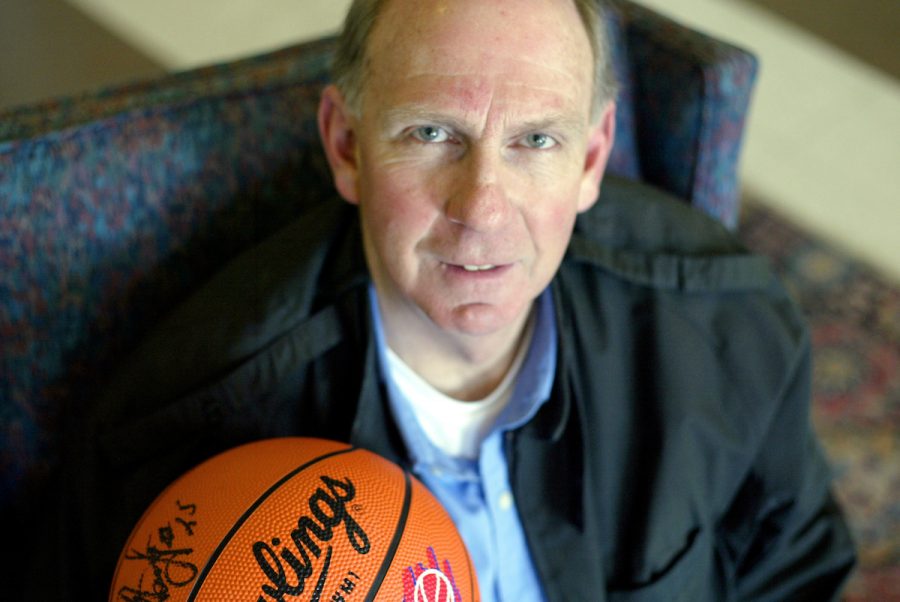 This is part of a series highlighting retiring faculty in the Undergraduate College at Wake Forest.

The statistician who has tracked passing attempts and rushing yards at Wake Forest University home football games since 1980 holds a Ph.D. in Mathematics.

Richard Carmichael has taught courses on Linear Algebra and collaborated with mathematicians in Croatia, Poland, and India. His field of study is in Calculus-based math that he admits is “way over” the heads of his incoming students.

However, for a few months every year, Carmichael volunteers to do basic math by adding up points, rebounds, and steals at WFU home basketball games. The 76-year-old Professor has a structured mind that helps him stay organized while keeping stats.

“I really enjoy doing that much more than if I was just going to the game and sitting in the stands and watching,” Carmichael said. “It keeps your mind focused on what’s going on. You have to really pay attention.”

Carmichael has perfectly blended athletics and Mathematics for more than a half-century, starting in 1960 when the former star forward at what’s now High Point Central High School decided to attend WFU on a basketball scholarship.

As a sophomore during the 1961-62 season, Carmichael came off the bench as a role player for a Demon Deacon team that made the only Final Four appearance in school history.

More importantly to his long-term future, Carmichael decided during that memorable season that he would major in Math, attend graduate school, and pursue his goal of someday becoming a college professor.

“When I came to Wake Forest, it was not a foregone conclusion that I was going to major in Math because I considered Accounting. I took the two first Accounting courses,” Carmichael said. “I considered Physics.

“Eventually during my sophomore year, I went to the Psychological Testing Center and took an aptitude test and it confirmed that I was suited for Mathematics.”

The results of the aptitude test have proven to be correct. Carmichael will retire at the end of this semester, which marks his 50th year teaching Math at a university.

“I was someone with very little confidence in myself as far as my ability to become a Mathematics major and wasn’t even sure that Math would be my major at the time,” said Debbie Harrell, a 1976 WFU graduate who’s now an Assistant Professor and Chair of the Department of Mathematics and Computer Studies at Salem College.

“Dr. Carmichael was simply a calm, encouraging influence on my path in life. He built my self confidence and made me think I could succeed  and actually believe I could teach mathematics.”

Carmichael has remained a constant at WFU since returning to his alma mater in 1971 following three years as an Assistant Professor at Virginia Tech. He has never entertained an offer to teach elsewhere, instead establishing himself not far from where he was born in High Point.

Carmichael served as Chair of what was then WFU’s Department of Mathematics & Computer Science (1988-2000) before overseeing the Math Department until 2004.

He also spent 13 years as a Faculty Athletic Representative, serving as a bridge between academe and WFU’s athletic department.

“Richard is an excellent mathematician and a wonderful colleague. He has continually contributed to the Wake Forest community through his strong scholarship, teaching, and service. Students loved Richard. Many of the faculty point to his mentoring as reasons for much of their own personal success. ” Ed Allen, Professor and Chair of the Department of Mathematics & Statistics

Carmichael has written three research monographs based on his work, including Boundary Values and Convolution in Ultradistribution Spaces (2007).

As a promising mathematician in the early 1970s, Carmichael considered staying at Virginia Tech instead of pursuing what was then an open faculty position at WFU. At the time, he wasn’t sure if he was ready to return to his native North Carolina.

“But I decided that there was this opportunity, and it may be that that opportunity wasn’t going to be there in the future,” Carmichael said.

So he accepted it, returning to a place that had provided him with countless memories over the years.

The first time Carmichael flew on an airplane was when WFU’s basketball team traveled for a game at the University of Florida on December 12, 1961.

Three months later, when the Demon Deacons returned from the Final Four and landed at Smith Reynolds Airport in the early morning hours, several hundred fans were there to welcome the players home.

One of the fans to greet Carmichael was the Chair of the Math Department, who had been his professor during his first semester at WFU.

“I remember he came up to me and congratulated me, and I was shocked. I thought, ‘What is he doing here?’” said Carmichael, who scored 584 points and grabbed 340 rebounds in three seasons for the Demon Deacons.

Carmichael admits he doesn’t particularly enjoy watching sports. He’s more of a math guy than a sports fan, though he intends to keep taking stats at home football and basketball games until he no longer enjoys it.

Carmichael will also get an opportunity to see what his career might have been like had he decided to major in Accounting. He has volunteered to do taxes for low-income families in the Winston-Salem area with an organization known as Experiment in Self-Reliance.

Turns out, the volunteer accountant is an expert in Complex Variables.

“I’m very happy with my career here and my contributions to Wake Forest in many ways,” Carmichael said, “and that matters to me.”