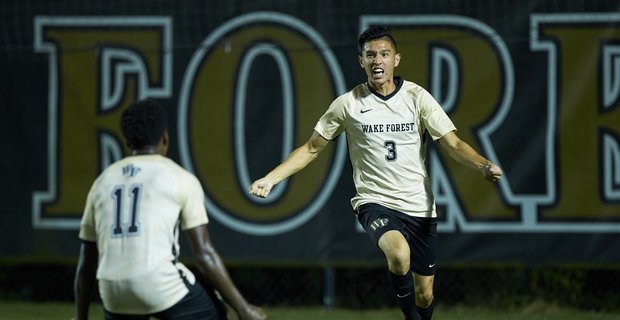 Year after year, athletic teams see players move on to other things such as graduation, retirement or higher recruitment. In times of transition like any of these, teams see a period of re-development and assimilation to new environment and team dynamics.

Seasons are needed for those teams to adjust to where they were prior to such drastic changes. What many may not know is that our very own men’s soccer team felt that exact modification when seven players on our roster moved on to participate in the MLS over the offseason. You expect something like this to set back our Demon Deacons, right? Wrong.

This past Friday, our men’s soccer team, currently ranked No. 5 in the country, took on the No. 2 ranked Indiana Hoosiers at Spry Stadium for the second home game this season. Spectators and fans expected our guys to struggle with a game such as this one and were anxious to see the game underway.

The first half of the game was something of a stalemate between the Hoosiers and the Demon Deacons. Neither team could progress down the field and see the black and white hit the back of the net.

As the second half of the game was beginning, just three minutes into the second half, the Demon Deacons started off strong with a goal by sophomore Omir Fernandez, with an assist by junior Eddie Folds. 1-0. The momentum was slowly shifting in the Deacons’ favor.

The second half continued on with a strong performance by both teams, but as the game came to a close in the second half, the Hoosiers’ striker Griffin Dorsey scored from the right side of the box. Things were all tied up: 1-1. The regulation time came to a close as things were still at a tie, which of course initiated overtime at Spry Stadium. After two nail-biting overtime rounds, with just four minutes remaining before a tie was to be announced, freshman Kyle Holcomb scored a golden goal to give the Demon Deacons the victory. He became the first-ever freshman Deacon to score an overtime golden goal in his season opener, so a big congratulations to him is in order.

In an interview with head coach Bobby Muuss, he commented on the atmosphere of such a win. Muuss said, “Even in lineups, I haven’t heard it that loud in a long time. To get that game-winner and to see the guys sprint from the opposite end [to The Hill] in 10 seconds,” Muuss said. “It means the world. We love this Wake Forest soccer community and student body. We just hope it continues for the rest of the year.”

Our Demon Deacons will be traveling to Fort Myers, Florida for their next game against Florida Gulf Coast this Saturday, followed by their next home game here at Spry Stadium against the Scotsmen of Presbyterian College at 7 p.m. on Tuesday. Be sure to make your way out and support our Demon Deacons.