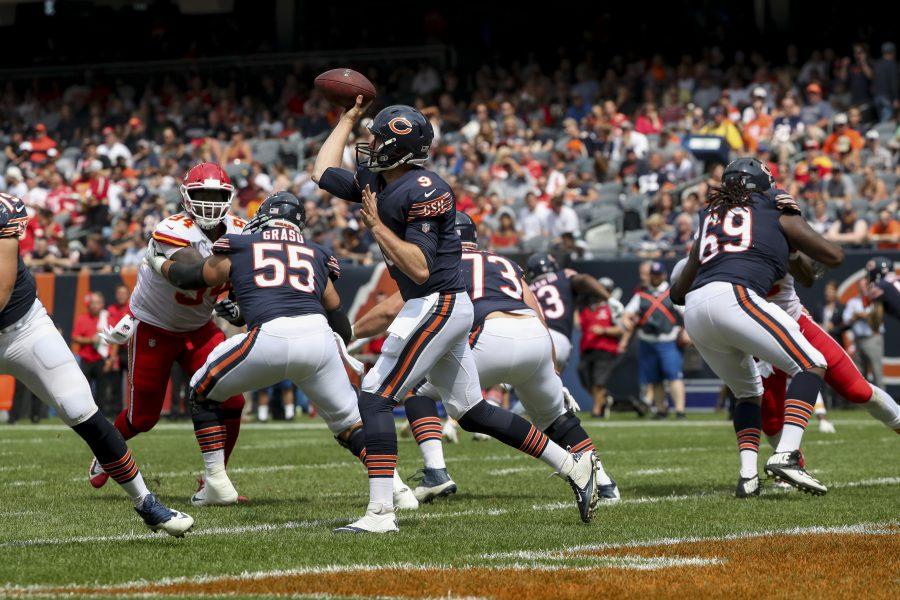 Chicago Bears quarterback Tyler Bray (9) throws a pass during the second half against the Kansas City Chiefs in the third preseason game of the season on Saturday, Aug. 25, 2018 at Soldier Field in Chicago, Ill. (Armando L. Sanchez/Chicago Tribune/TNS)

Although it is still blisteringly hot here in Winston-Salem, the cool, crisp air of fall is right around the corner and that can only mean one thing. No, not pumpkin spice lattés being back at Starbucks, but football season is about to start.

As the pre-season winds down and final rosters are announced for our favorite NFL teams, America’s new favorite pastime, fantasy football, begins to ramp up. A key portion to every aspiring league champion’s season is knowing which busts to avoid and which sleepers to pick during the draft.  Here’s a little advice to adhere by come draft day.

A name that seemingly entraps fantasy enthusiasts every year, Robinson once again figures to be a dangerous play. After bursting onto the fantasy streets during the 2015 season to the tune of 80 catches, 1,400 yards, a league leading 14 touchdowns and a pro bowl appearance, Robinson hasn’t come anywhere close to those numbers in the following seasons.  A mere 880 yards and 6 TD’s in the 2016 season was followed by missing the entirety of last season due to injury (a torn ACL no less) and the hype of the former Jags wide receiver was knocked quite a bit. However signing a three-year deal with Chicago, a team headed by the duo of second year quarterback Mitchell Trubisky and offensive guru Matt Nagy, breathed new life into the Robinson hype train.  Don’t buy in. Despite currently having an ADP of the sixth round, there are far better options than Robinson at this point in the draft. Trubisky is unproven, as is the Bears line. It is unknown what the chemistry is between Trubisky and the wideout; perhaps there are targets that the young quarterback prefers more. Either way, given the uncertainty surrounding Robinson, I would stay away come draft night.

After the Ray Rice debacle of 2013 the Ravens struggled to find a new identity at the running back position.  After forgettable seasons from Justin Forsett, Bernard Pierce and Terrance West, a back finally emerged from the pack. After getting limited touches in Seattle, Alex Collins finally had the breakthrough season that Baltimore fans were looking for in 2017. Collins rumbled to the tune of 1,160 total yards and six touchdowns. In the preseason Collins was given the “superstar” treatment, barely appearing and only taking about six snaps. This lack of action in the meaningless August games proves that there is no competition in the Ravens backfield: Collins is the guy you want to have.

As the running back prospects dwindle in the first rounds,  you may be tempted to reach for backs: don’t. Collins is currently going in the mid to late third round, and I believe this is still too late. Collins could easily have top 7-10 RB potential if things fall his way in Baltimore. Don’t be afraid to take a receiver in those first two rounds with the knowledge that patience could yield you a top running back later on.