New Indie Film Lives Up To Its Genre 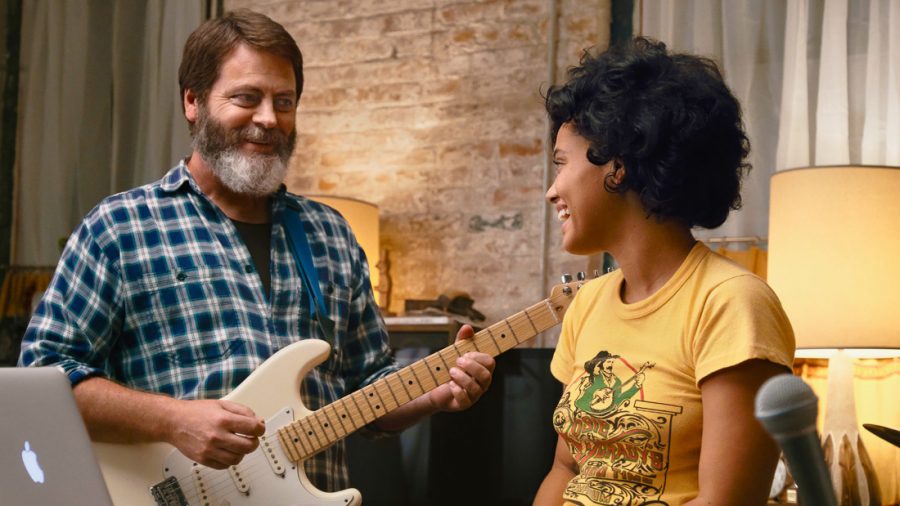 The trailer for Mamma Mia! Here We Go Again truly epitomizes the term “coming attraction.” It is an inundation of beautiful people doing extraordinarily uplifting things, so much so that I was all but catching the maudlin globs from my face.

The musical-feature offered the beautiful so unsparingly that it also promised a palpable exclusion from it. A picture that will be wondrous to look at, to feel for or about, but not necessarily with, Mamma Mia’s moments left me an emotional aperture craving an even-keel.

Hearts Beat Loud, directed and co-written by Bret Haley and Marc Basch, was just the easy, hour-and-thirty-minute indie-caress I needed. Compared to the histrionics-at-a-distance induced by Mamma Mia, the film made the ground, once again, a place to walk on.

Frank Fisher (Nick Offerman) operates a record shop in Red Hook, NY, and the store (the blatant sort of curio that one immediately knows can only survive on the hidden, hipster bulges of New York City pocketbooks) is going out of business. Fisher, a world-weary musician and soul, can’t survive even with the beneficence of his landlady (a less welled-up and heavy Toni Collete than we saw in Hereditary, but no less effective, and just as charming). Frank’s daughter, Sam (Kiersey Clemons), plans to attend UCLA in the fall, and is spending her summer taking a pre-med class to get ahead (“Do you know how hard it is for an incoming freshman to get a research position?” “No.”) Frank is the laid-back, steadily-being-dismissed musician, who Sam occasionally has a “jam-sesh” with. Of course, the film’s McGuffin appears when one of these routine jam-seshs mutates into a spontaneous and successful musical experiment. After the two create their own single, “Hearts Beat Loud,” written by Sam, musically Frankensteined by the two together, Frank uploads it to Spotify. After that, in a very minor way, the track is picked up, and when Frank hears it playing at his local coffee shop on the ‘New Indie’ playlist from Spotify, his passion reignites. His band-in-desuetude has a chance at revival. When he pitches the idea to his daughter, she says, “We’re not a band.” Henceforth, the eponymous group is formed, and the movie, conscious of the sneers this conceit innately incites, moves lightly and lovingly forward.

Although clichés abound, Offerman and Clemens ground Haley’s picture in the charming, indie reality we have become accustomed to: casually well-fitting clothing, cadences and scenarios of extreme naturalism. It’s what I call the Joe Swanberg way (Easy, Win It All, Drinking Buddies), where the film seems to have captured itself. And although Hearts Beat Loud is of that same type, it is one of the bottom rungs. The tropes are played out, and they work in the moment, but do not etch themselves into your memory, like certain episodes of Swanberg’s Easy, or for that matter Noah Baumbach’s Frances Ha.

There are already a lot of fingerprints on the immediately-picked-up-upstarts glass, and with mostly original music from Keegan Dewitt, containing an in-the-moment allure and catchiness crooned by both Offerman and Clemons, Hearts Beat Loud echoes a film like Begin Again (2013), where Mark Ruffalo and Kiera Knightley become an unlikely singer-songwriter pair (there’s a bit more Mamma Mia aromatics involved with those two on the bill). The music is the specific type that seems hooky and original in the context of the film itself, and testifies to the other absorptive aspects of the medium that can allow what amount to boilerplate pop songs to resonate on a deeper emotional plane. You may listen to “Hearts Beat Loud,” or “Everything Must Go,” another original from the film, as you ride the sympathetic and emotional high out of the theater, but ultimately the tunes will fade. As Frank says to Sam when she claims her song lyrics are ill-conceived, it doesn’t matter, “it’s a mood piece.”

And that’s what Hearts Beat Loud is, a proud and effective, if capsular and limited, mood piece. The film rides on the charm of its actors (Offerman the loving, frayed father, who is the quick-to-turn quixotic musician; Clemons the soft-faced, intelligent, latent-creative; Collette the effervescent landlady who can’t ever quite bring herself to boil, emotionally, with Frank). The boppy originality of its score, and the few actual indie music choices interspersed in between, flesh out a sound of low-fi musical engagement. The film creates a pleasant echo that doesn’t necessarily reverberate, but definitely fills the room. With quirks, laughs, and intimate sequences, Hearts Beat Loud has all the qualities of a good indie. It is highly approachable, and its style is one of archetypal movie achievements with hardly an unlikeable character in sight.

But ultimately, the mood collects into brief effectiveness. The feeling created is that of an extremely rare, emotionally raw song, but where the song does it through its single medium, Hearts Beat Loud, with all the trappings of cinema, scrapes together a facsimile of that feeling, and therefore fails to stand up as enduringly great art. It’s as if we were handed a cobbled together thing that a single piece of great art creates by itself, without forcibly bringing all other things along with it. We get there, but upon inspection, it’s more akin to the student who memorized portions of the textbook as opposed to dashing, original intelligence of talent. An eventually unsatisfying synergy is the result, not a sustainably-faceted gem. Make no mistake, that is not to say all aspects of film cannot contribute to great art, but this film is going for what many a great song has — raw emotion — and it doesn’t get there with one single thing, so it has to eke it out of other items at its disposal — acting, lighting, camera movement, etc. Because the original music only has a modicum of enduring feeling, the film itself is not a thing of endurance, but a thing of ephemeral lightness, quick and easy, a bricolage of slightly feeling things made into a fairly coherent, hour-and-thirty-seven-minute thrust. This is not a condemnation, but simply an assessment of how well the film sticks, and henceforth endures.

Hearts Beat Loud, minus the original music, fits the indie mold. It is akin to, although much less inventive than, (500) Days of Summer (2009). But the imprint Marc Webb’s paradigmatic film is indelible. Hearts Beat Loud, although delectable, seems, in the scheme of the cinemascape, as if it may fade like breath on a mirror. And that’s O.K. For the length of time spent in your seat, you buy it.