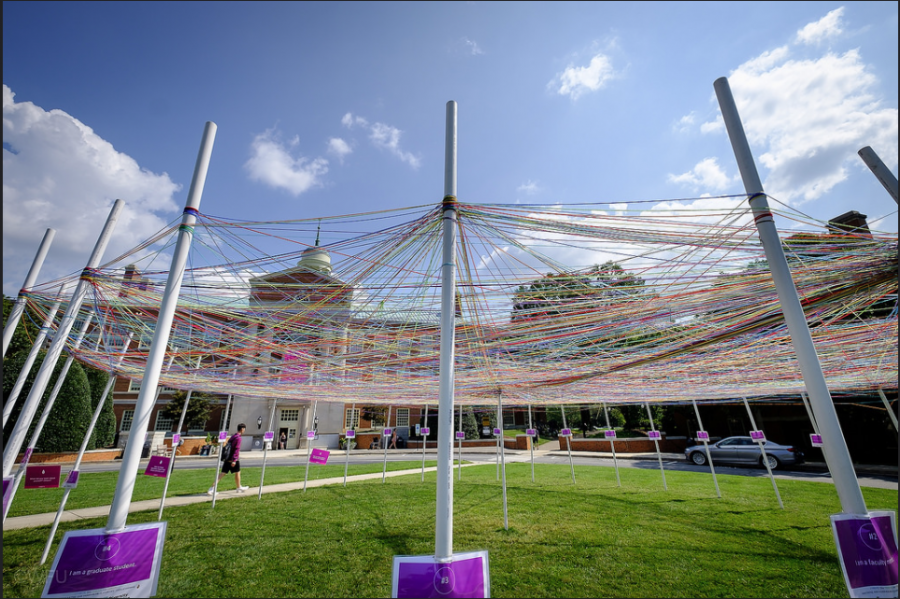 There’s been a bold addition to the Wake Forest campus, and it’s hard to miss.

Located on the lawn in front of the Z. Smith Reynolds Library hangs an interconnected web of different colored yarns, which at first sight appears to be a simple hand-built structure.

However, when examined more closely, one could see that each string of yarn connects to various statements written on purple pieces of paper. The 41-foot-wide structure is part of a global public art movement.

UNITY is an interactive public art project designed to explore the labels that people assign to themselves and how those labels support and limit the building of communities. It was launched by mother Nancy Belmont in her hometown of Alexandria, VA as a response to the divisiveness and negativity currently reflected in American politics.

As it states on UNITY’s website, during the first manifestation of the project, around 1,500 people participated and strung almost 37 miles of yarn. While Belmont was originally unsure about the project, it was ultimately a big success. UNITY now exists in many countries across the world including Canada, Costa Rica, New Zealand, France, Spain, Italy and India.

Wake Forest is only one of the many locations globally to display the UNITY interactive public art project. After a Wake Forest alumnus suggested several years ago that the project travel to campus, the Office of Diversity and Inclusion took the lead in developing the project.

“We were finally able to bring it a couple of years later so we’re really excited seeing it come to fruition,” said Shannon Ashford, Manager of Diversity Education in the Office of Diversity and Inclusion. “It definitely is a celebration in which we intersect with one another, being able to see the different colors that we have.”

Additionally, in a press release by Wake Forest News, the university shared, “This larger-than-life structure is intended to raise consciousness about the labels people give themselves and others and to explore how these labels both support and limit opportunities to build interconnected, interesting communities… the yarn intertwines to create a web and is a physical representation that each participant is connected in some way with another.”

The purpose of the structure, which consisted of 32 15-foot posts, was for individuals to take a string of yarn and attach it to different labels they felt they associated with. These labels, written on purple pieces of paper, hung on the posts that supported the structure. Examples of these labels included “I am a person of color” or “I have a pet.”

According to an article on WFMY News 2, over 400 students participated in this ever-growing representation of diversity on campus. Many professors encouraged their students to participate and some professors incorporated students’ participation as part of the class agenda.

“It is an interesting centerpiece that many people can appreciate,” said junior Christine Pangborn.

“This art project is a powerful, interactive exhibit that shows students firsthand how diversity has the power to bring people together to appreciate and celebrate differences, rather than separating them,” said sophomore Caitlyn Margol.

For some, the project showed that no matter what labels people assign themselves, it’s not necessarily those which we have in common. While observing the project taking place, it was common to witness people bumping into each other tying the yarn around the various poles, representative of how lives intersect in many different ways and how people have more in common than they might think. Though the various strings of yarn look connected from far away, up close one could see each individual’s yarn and story.