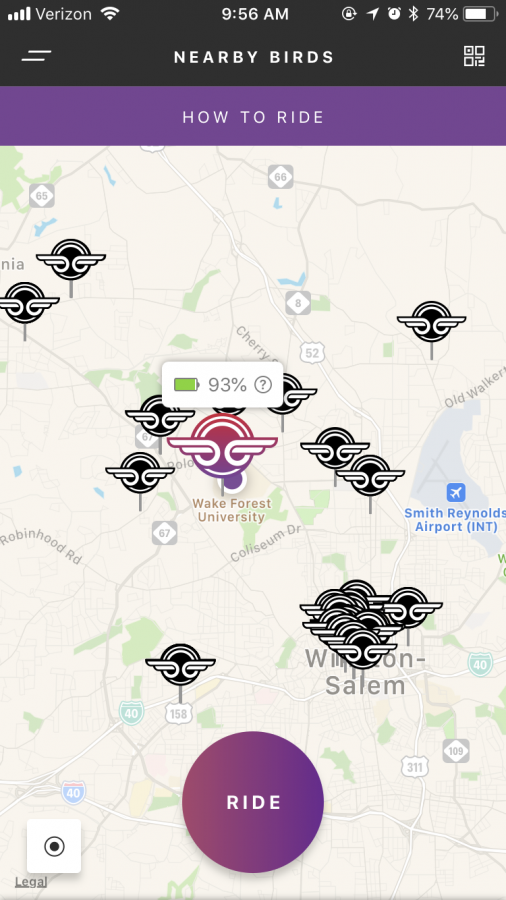 Wake Forest students have recently found a new way to get to their classes when they’re running late.

The Bird Electric Scooter is the newest way to get around on campus.

Bird is an electric scooter system controlled by a smartphone app. Similar to Uber, users can track their location to find Birds near them between the hours of 4 a.m. and 9 p.m. When a nearby scooter is located, users scan the scooter’s QR code into the app and are all set to ride.

Bird was created with the intention of making “transportation better and more environmentally friendly.”

It only costs $1 to unlock the ride, and then 15 cents per minute of use.

Riders can go anywhere they want with the Bird, and, since the location is tracked, they can leave it wherever for the next rider.

People can also sign up to become a charger and get paid for their services. Chargers bring the Birds home with them and charge the scooters at their house. This helps spread Birds out throughout cities, and give people an incentive to get involved.

Senior Natalie Wilson recently signed up to become a charger. Once she completes the application and three training modules, Bird will send her three special chargers and take a 10 dollar deposit out of her first paycheck.

Wilson, who has plenty of space for the Birds in her student apartment, believes this is an easy way to make extra cash.

“I’m interning downtown this semester, so I figure that I can hopefully pick some up and just take them with me on the way to work,” said Wilson. “The Birds have to be charged, and they need people to do it. You can even just sleep while they charge.”

Bird is focused on ensuring that their products do more good than harm in their respective cities. A unique business strategy implemented by CEO Travis VanderZanden is the “Save Our Sidewalks” pledge. The “SOS” Pledge states that there is a “program designed to retrieve all of the vehicles from city streets every night” and that they will be redistributed the next day in desirable locations that don’t clutter up the city streets. Additionally, the “SOS” Pledge promises that they will only increase number of vehicles in a designated lo-cation if they are being used at least three times per day to limit cluttering.

Finally, Bird promises to give $1 per vehicle per day to the city’s government to build infrastructures that promote safe riding, like sidewalks and bike lanes. The Winston-Salem and Wake Forest communities are not the only places where these electric scooters have arrived. According to Greensboro WFMY News 2, these scooters reached Greensboro on Aug. 29 with-out permission from the city. They appeared “seemingly overnight” when they were dropped off on the side-walks by the owners of the company. A similar phenomenon happened in Winston-Salem. Wilson noted the abundance of Birds in the area. “There are Birds all over Winston-Salem, not just around campus, and because they don’t have any designated docks as starting points, they can be found pretty much anywhere that’s off a sidewalk, and the locations can always differ,” Wilson said.

Oddly enough, Winston-Salem is not mentioned as a location on the Bird website. However, Chapel Hill, Charlotte, Greensboro and Raleigh are all included. Additionally, Wake Forest isn’t listed online as a college campus working with the company. Wake Forest students are seemingly confused by the appearance of the Bird scooters. Sophomore Kaley Vontz tried the scooters “for fun” on campus, al-though this was not her first experience with Birds. “I first saw them in Atlanta and was kind of shocked they would bring them to Winston-Salem because it’s not that big of a city,” Vontz said. Echoing similar sentiments, sophomore Grace Evangelista also felt surprised by the Birds’ sudden presence on campus.

“I feel like they appeared out of nowhere,” she said. “Then I saw five in one day.” Rumors have been floating around Wake Forest to try to explain the Bird. Some believe that other users rode the scooters onto campus from Greensboro, while others heard that Wake Forest banned them, and many originally believed that they were other students’ personal scooters. However, Bird’s public relations team put these rumors to rest. “Bird landed at Wake Forest University as a part of our University Pop-Up Tour,” said Mackenzie Long, a member of Bird’s public relation team. The tour includes both small, private universities as well as large, pub-lic universities. VanderZanden explained in PR Newswire that the purpose of the University Pop-Up Tour is to “help eliminate transportation gaps so students and faculty can focus on what really matters: education.”