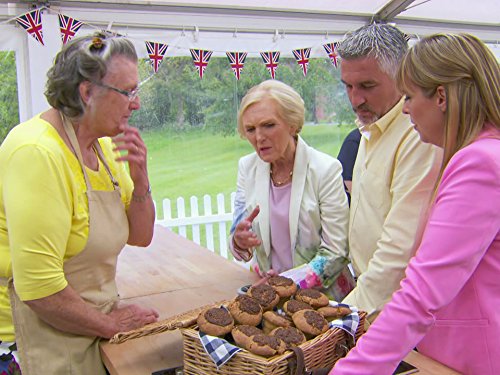 The Great British Baking Show — known as The Great British Bake-Off across the pond — aired its fifth season on PBS this past July with a series of episodes that were technically six years old. However, one need not give a flying Fondant Fancy about the time lag. For ten idyllic Friday evenings this summer, it was 2012 again for cake-loving Yankees like myself. President Barack Obama was still on the verge of being reelected to a second term, the Brexit vote was still years away and whether John’s Victoria sponge would rise or Brendan’s crème pâttisière would be slack was still anyone’s guess.

Serious Bake-Off watchers know that the show recently underwent a controversial move from BBC to Channel Four before the eighth season aired in the U.K., which led to the resignations of co-presenters Sue Perkins and Mel Giedroyc and judge Mary Berry. We in the U.S. are lucky, though, because we are blessed with one more unseen season of Mel and Sue’s innuendo-laced quips and Mary’s exclamations that a cake “just looks a picture” even if it tastes terrible.

It wouldn’t be Bake-Off without competitors’ self-deprecating and characteristically British “stiff upper lip” way of dealing with mishaps, and fortunately this season has plenty. In one particularly controversial and exciting technical challenge (well, by Bake-Off standards), poor John buttered and salted his baking tins instead of sugaring them. Stuart was possessed, for some godforsaken reason, to use tomatoes as his fruit of choice in his upside-down cake, resulting in a concoction that resembled a horrible mashup of a ginger cake and a Chicago deep-dish pizza.

Forget the plate-throwing and temper tantrums of American cooking shows, however. When something goes wrong, even the most heated of the competitors express themselves as if they’re characters in a Jane Austen novel. “I’m really, really cross with myself,” Sarah-Jane said after a particularly challenging round. Another time, when Sue expressed disappointment that Victoria had been eliminated, the amateur baker said, “Oh no, I’m relieved … It was the right decision.” Finally, after Manisha dropped her sponge puddings on the floor and had to present the disintegrated cakes to the judges, she actually praised them for how kind and understanding they were. “I can’t say anything more than how decent they were about it,” she said. “They were both very, very decent.” It’s true, too, because the harshest thing Mary typically said was “Well, the [insert ill-advised flavor here] is coming through.”

Arguably one of the best aspects of Bake-Off is its endearingly British baking terms; if it is the source of the sum total of your baking knowledge, as it is of mine, you may find yourself unwittingly using the phrases and pronunciations from across the pond. Here’s a primer: scrummy is good and stodgy is bad. The Star Baker is often “dead chuffed” and the eliminated baker is usually “gobsmacked.” Cling film is Saran wrap, icing sugar is powdered sugar, dessert is pudding, pudding is custard, biscuits are cookies, sponge is cake and scone is pronounced “scon.” “Oh, Brendan, you clever sausage” and “Oh, my giddy aunt!” are real expressions. Why don’t people talk like that stateside?

Maybe it’s the kindness, the lovable British colloquialisms or the B-roll footage of goats frolicking merrily in the grass, but there’s something magically comforting about a world in which life’s biggest twists and turns are navigated in an eight-strand plaited loaf. Whether the bakers rise to the occasion like a chocolate soufflé or crumble like underworked pastry, the landing is guaranteed to be as soft as clotted cream on a freshly baked British bap. I’ll surely be back for another serving.