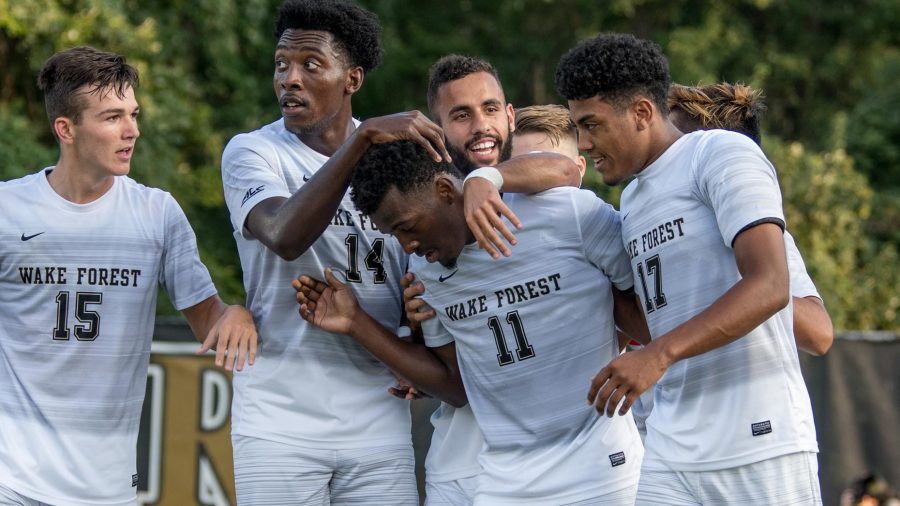 As a preview of Hurricane Florence’s arrival into North Carolina towards the end of the week, the top-ranked Wake Forest Men’s Soccer team took the Georgia Southern Eagles by storm.

The first 74 minutes of play on Tuesday night at Spry Stadium were scoreless, but the Demon Deacons once again brought forth the heat in the second half, netting two goals in the last 15 minutes of play.

The game’s turning point arose when Georgia Southern was given a red card in the 54th minute.  After this moment, the most dangerous opportunities materialized.

“At half time we talked about being patient and not getting onto ourselves about not scoring yet,” said junior midfielder Alistair Johnston, who scored his first career goal for the Demon Deacons in the 87th minute of play. “The chances will come if we are patient and keep the ball in their half.”

That is exactly what happened.

“I was played a perfect ball over the top by Tater, and I was just focused on keeping my shot on target with my left foot,” Johnston said, describing his goal. “Thankfully, it went in.”

Sophomore Omir Fernandez had scored his fifth goal of the season just moments before. A pair of passes from junior Brad Dunwell and freshman Isaiah Parente found Fernandez along the right side of the box. He had no trouble beating the keeper with a ball that found the near post of the goal.

The Demon Deacons seem to have found a rhythm coming out of a six-game winning streak, including a 3-0 win in their ACC opener versus NC State. This being said, there are areas which the team endeavors to improve.

“Some things we need to focus on are coming out faster in the beginning of each half as well as being able to keep the ball for extended periods of time,” said team captain, senior Sam Raben. “We also need to work on not making silly mistakes in the wrong places.”

Wake Forest is now moving towards a big week of ACC play. They will take on Virginia Tech on the road on Friday, Sept. 14, and will head to Clemson, SC for a match up against the Tigers the following Friday.

Hurricane Florence’s arrival brings in questions the conditions of the team’s practice fields leading up to these games. However, like the storm, Wake Forest also looks to bring some intensity both into these next games and into the rest of their season.

“Even though we have had some good wins, we’re still not where we want to be,” Raben said. “The goal is to keep improving steadily and then peak once the NCAA tournament comes around. That’s a long way away though; for now we just need to look forward to winning our game this Friday.”