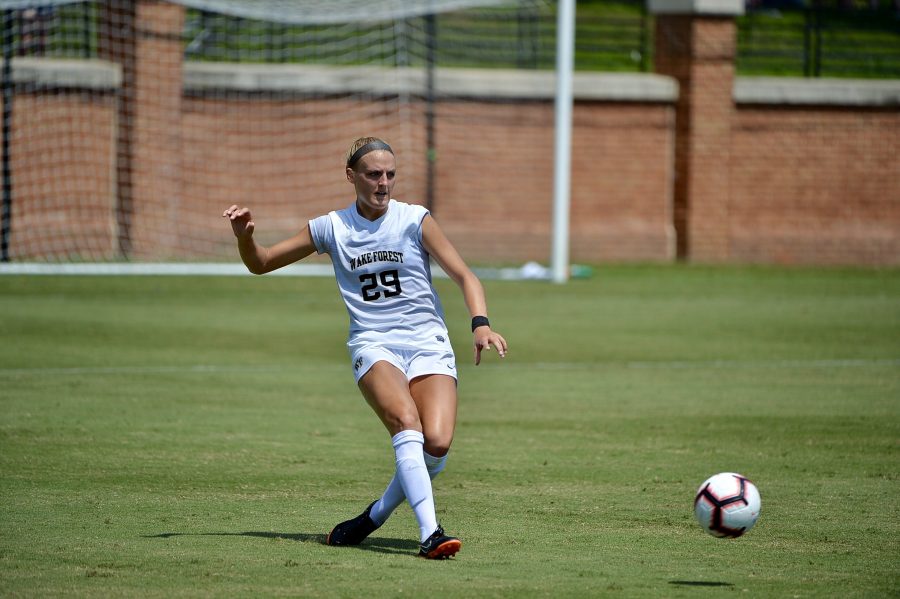 Will May: Do you have any major goals or plans for the remainder of this season?

Katie Ravenna: Right now our main goal is to build on the success we’ve had over Penn State and Longwood and to use that momentum as we head into conference play.  Our focus is to keep growing and moving forward as a team with every game.

WM: What’s your favorite activity that you do in your free time (other than soccer)?

KR: Other than soccer, my favorite activities are reading a good book, watching The Bachelor with my teammates and fishing (when I’m at home).

WM: How do you feel like Coach da Luz has helped you develop as a player through your athletic career?

KR: Coach da Luz has played a huge part in who I’ve become as a player. Before coming to Wake Forest , I’d always relied on my athleticism and had very little technical skill as a player.  Since I’ve been here though, he’s really helped me to improve the technical side of my game while also pushing me to be a vocal leader on the back line.  More than anything though, Coach Daluz has always shown confidence and believed in me, even when I doubted myself as a player.

WM: Are there any upcoming games that you’re particularly excited about?

KR: I’m super excited for the Notre Dame game coming up! It’ll be a huge game for us before we go on the road for three games and it’s Bri Carney’s senior night!

WM: What will you most miss about your time spent on Wake Forest soccer?

KR: I’m going to miss my teammates the most.  All of the seniors are my best friends and I’ve grown extremely close with many of the underclassmen. They’ve been my biggest support system during my time here.

WM: I’m still unsure of what career field I want to go into after graduation, but right now my main focus is to find a good job close to home.  As for soccer, I’ve always been interested in coaching so I might look into that sometime down the road.