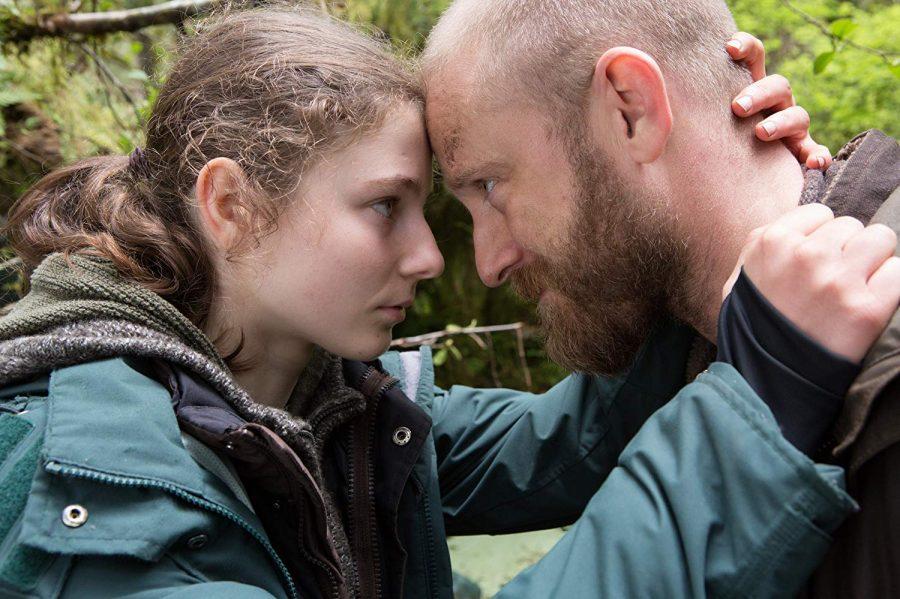 One must wake to Leave No Trace as one wakes to the world. Senses must stir and adjust. The mind must prickle to the rhythm of the film, just as the mind slowly attunes itself, after unlimited adventures, to reality. Eventually, mind and limb are filled by the natural soundscape; the expectations of cinema, those that the popular consciousness have been reared on, fall away to reveal a delicate rapture.

Just as the precise, predictable sounds of nature can assume a familiar position after a time — the twittering bird, the throaty cricket, the low roar of falling rain — Leave No Trace settles into a place in the mind that allows singular attention. The film begins to fit. Emotional and intellectual thoughts bubble up, as well as that other, unknowable thing endemic to good art.

We immediately meet Will (Ben Foster) and Tom (Thomasin McKenzie), father and daughter, in the dense woods of the Pacific Northwest. The two are subsisting on Carhartt gear and the edible flora and fauna native to the area. Taught some basic keys to survival, as well as how to cover her tracks, Tom has been reared outside of society, but her minimalist diet and pubertal hunger pangs are beginning to clash. The girl needs more food, and her father knows it. It is apparent, vaguely, that the situation will soon become untenable, but we are unsure if it will be because of too many growing pains, or some unknown illegality that seems to simmer underneath.

While Tom is out foraging, a runner catches a glimpse of her. Soon, the police come with a nosy canine and Will and Tom are hauled in for illegally living on public land. They are tested for intelligence and probed for mental instability, and it is intuited that Will has PTSD. His military past, like many moving, 1950s literary characters, leaves Will unable (or at least unwilling) to live within the harsh, hyper-stylized scenes of society. He is restive, and the stillness of nature is a balm, until it is time to move on for fear of discovery. With its easily decipherable means and ends, its pared down choices, and its predictable, organic sound and rhythm, Will finds the closest thing to a respite in nature. Tom is more or less on the same page, only Will’s itinerancy she could do without, especially when, ultimately, she bears the brunt of its sometimes thoughtless vagrancy. Will’s inability to behave in even the barest mode of societal compliance leads to a night spent nearly freezing to death. In the end, the two must face the reality of Will’s condition and comply not with society’s expectations of them, but with the truth that Tom doesn’t have what Will has.

Leave No Trace occupies a unique space in the PTSD film world. It focuses less on capturing the demonstrable emotions of a soldier in society and smartly holds back from the voyeuristic pleasure audiences derive from outbursts. It does not contain the soldier’s simmer-coming-to-several-boils moments we have come to associate with Post-Traumatic Stress; instead, Will could conceivably exist without his military past, as a man traumatized by social existence itself. The artifice of American society, especially paired with the stripped human reality of war, situates itself on an extreme. As Jean Baudrillard says in America, our country is a place where “everything is made public…[and] there is no place here for interplay of a subtler nature.” It is his military past that makes Will a sympathetic character, but it is the film’s own subtler genius that perhaps makes him an empathetic one.

With minimal music, sparse but communicative dialogue, and a style that turns Terence Malick into a sort of Calvinist (in a good way), the film achieves an austere, natural beauty that does not need to be dressed up in cinematic language. It forces the viewer towards assessment and realization, the juxtaposition of economic and social accoutrements with the relative depth of personal relationships. But Leave No Trace is never preachy, and converts us with its of-this-world persuasions. Foster and McKenzie are actors of the eyes, and with a pared down script and visual style that is, beautifully and decidedly uninventive, we are never distracted, and a notion of capturing the entire film with one’s own eyes makes the event that much more impactful. It is as if we are having a private conversation with the world and ourselves, as if, as Will and Tom form a unit of ineluctable community, they are pieces our own self trying to convene and confer within limitless nature.

The gestalt of the film is not a post-war histrionic; it is a gentle yet persuasive vibration that reverberates into a larger philosophical framework. It’s a sort of realization of the acquisitive, artificial vortex, disparate from nature, that we all circle around in. The post-Kardashian shame is paired with the difficulty and merit of tearing oneself away from it all. Consumer society and its attendant psychologies, the absolute monarch we must recognize and reckon with, the papered-over truth by platitudes and business book man’s thoughtful relation to nature and the self. Leave No Trace at once shows us this problem, very subtlety, and yet does not judge it for us. We must come to a conclusion. We must perform our own cost-benefit analysis. We must do something difficult — think.

The great Albert Camus once lamented, “There are no more deserts. There are no more islands. Yet there is a need for them.” There is a need for a meditative commune, for solitude and extra-societal reflection. This is one of the ways great men enrich themselves and their art, by tinkering with the self in the face of nature, by coming to an idea ex nihilo, by creating meaning from internal argument. Camus goes on to say, “In order to understand the world, one has to turn away from it on occasion; in order to serve men better, one has to hold them at a distance for a time.” Before you can decide if your service to men can be better, you must decide, outside of influence and in the womb of nature, if you can bear to serve them at all.