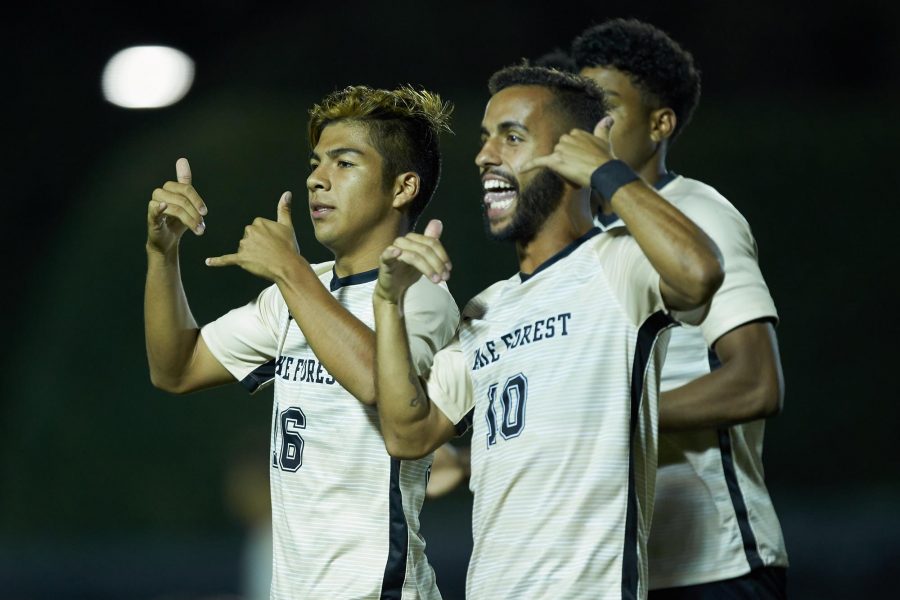 On Friday, Sept. 14, the No.16 Virgina Tech Hokies gave the No.1 Wake Forest men’s soccer team a brief taste of what it feels like to fall behind for the first time this season. How did the Demon Deacons react? By scoring two goals in the final 25 minutes to come back from behind and preserve their undefeated record, winning the match 2-1.

Wake Forest fans thought the Deacs had the game in the bag after Hokies defender Silvert Haugli was given a red card in the 30th minute of play, but were fooled when the Hokies responded seven minutes later by putting the ball in the back of the net on a corner kick to lead 1-0.

Wake Forest’s offense, notorious for being unstoppable in the second half, came out of the locker room hungry to get ahead. In the 66th minute, Bruno Lapa tied the game by finishing a pass from freshman Aristotle Zarris into the far post. This was his sixth goal of the season.

“In my mind I was sure that we would be able to create chances to score,” Lapa said. “We kept being patient and were able to find ourselves a tough win on the road.”

Fernandez received a lofted through ball from Justin McMaster and took a touch past the keeper to give himself a look at a wide open net. This was Fernandez’s sixth goal of the season, and his fifth goal in the last four games. He was named ACC Athlete of the Week for the second week in a row.

“We all understand the importance of these away games in the hardest conference in college soccer,” Fernandez said. “It was a game we needed to win and we believed in our abilities and stuck with our game plan. I am so happy it was able to work out in the end.”

Lapa and Fernandez are both tied for the ACC’s leading goal scorer, along with Simon Enstrom from Boston College.

The Demon Deacons have a week to recover and reset before they play Clemson this Friday on the road.

“Winning on the road in the ACC isn’t easy,” Lapa said. “We have to continue to get better and understand that other teams will give their best to beat us. Our organization defensively is one of our focuses going into Clemson, as well as limiting turnovers that can lead to transition opportunities for the other team.”

When Wake Forest played the Tigers for the first time last fall, they walked away with a thrilling 3-2 victory in double over time at home. The Tigers are certainly going to be hungry for revenge in this matchup on Friday on their home field.

The second time the Deacs met the Tigers last fall was in the ACC tournament semi-final match where Wake Forest came out with a 2-1 victory. This was yet another close game that was tied up until the 79th minute of play.

“What we want to take away from the Virginia Tech game is that we can grind out tough games on the road, and Clemson will be another test,” Fernandez said. The overall experience of playing an ACC opponent away and winning is something we will take and use to our advantage on Friday which is a must-win game.”

When the Demon Deacons return from Clemson, they will have three consecutive home games against in-state opponents and little time to prepare.