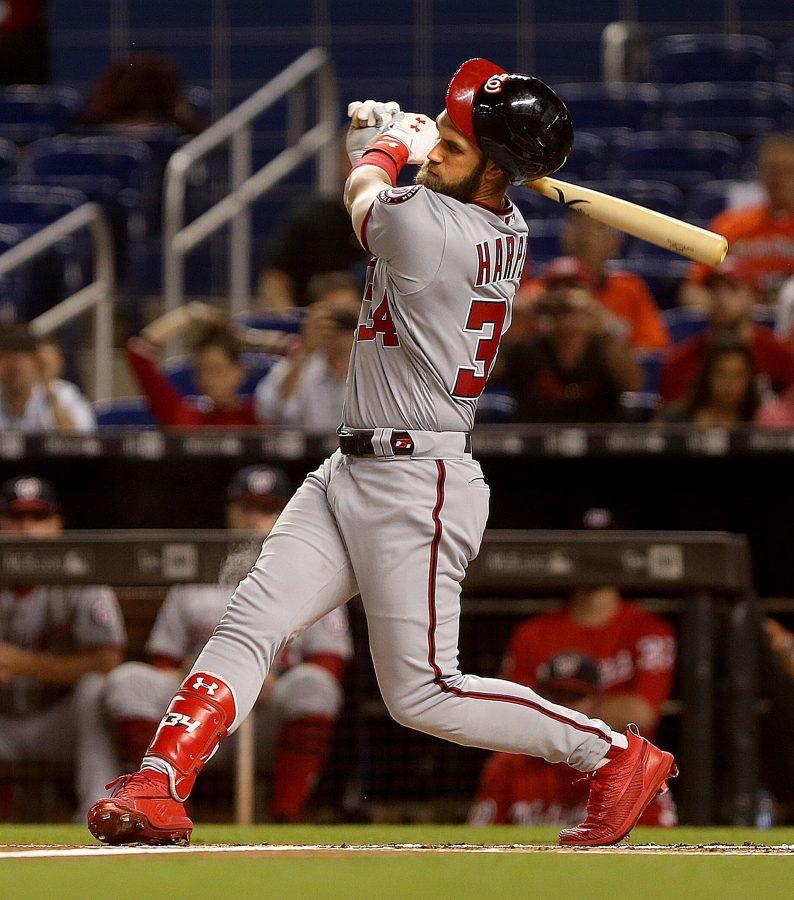 Washington Nationals' Bryce Harper (34) loses his helmet while batting in the first inning against the Miami Marlins on Monday, Sept. 17, 2018 at Marlins Park in Miami, Fla. (Patrick Farrell/Miami Herald/TNS)

In 2015, baseball writers and executives agreed that the 2018 free agent class appeared poised to be one of the greatest in history. Some of the names available at the end of 2018 season seemed like generational talents, and the rest of the class featured well-established veterans who would historically be top targets in free agency.

As the end of the regular season looms, the offseason inches closer and closer, and the list of players prepping to ink new contracts this winter has lost much of its shine.

At the top of the free agent class are Nationals outfielder Bryce Harper and trade deadline darling infielder Manny Machado, whom the Orioles sent to the Dodgers in July. In fairness, both of these players will still seek, and perhaps deserve, outrageous contracts this offseason, but each of their resumes feature more blemishes than one would have expected three years ago.

Machado, though undeniably talented, slumped badly in 2017. His 2017 slashline of .259/.310/.471 left much to be desired, and league-average players do not usually get or deserve the $400 million contract Machado will be seeking. His 2018 performance will be a tremendous boon to his bank account, as his 142 wRC+ tops any of his previous marks, so regardless of his 2017 showing, some team will be willing to sacrifice a chunk of their payroll to acquire Machado.

Harper’s future outlook feels even more uncertain, and his 2018 season will likely cost him once free agency begins. Though he has hit 34 home runs this year, his disappointing .247 batting average and career-high 160 strikeouts have done little in the way of proving that his 2015 season, when he accumulated 9.3 fWAR and won the NL MVP award, was not a fluke.

Harper and his agent, the notoriously difficult Scott Boras, will insist that 2015 represents the level of play Harper will provide in the future, but they will have to fight hard to get the mega-deal that Harper expected just a few years ago.

The Mets traded Harvey to the Reds this year, and when his contract expires at the end of the season, he will probably sign a cheap, short-term deal with a team willing to take a risk on him.

Perhaps most importantly, the leaguewide approach to free agency changed dramatically after the 2017 season, as teams now use much more caution when committing tremendous sums of money to aging players than they did in years prior. The new spending philosophy could influence this offseason as well, and it may culminate in a battle between owners and the MLBPA (Major League Baseball Players Organization).

Just like last season, several former stars who are years removed from their last prolific season will be available in the offseason, and they will likely be forced to wait and accept smaller, shorter contracts again.

There will be plenty of players who sign lucrative deals this offseason, but perhaps the universal expectation for a historic free agency was premature. Baseball players can collapse suddenly and quickly, and the amount of players who have dropped from the list of 2018’s top targets prove the folly in making broad assumptions about future production.