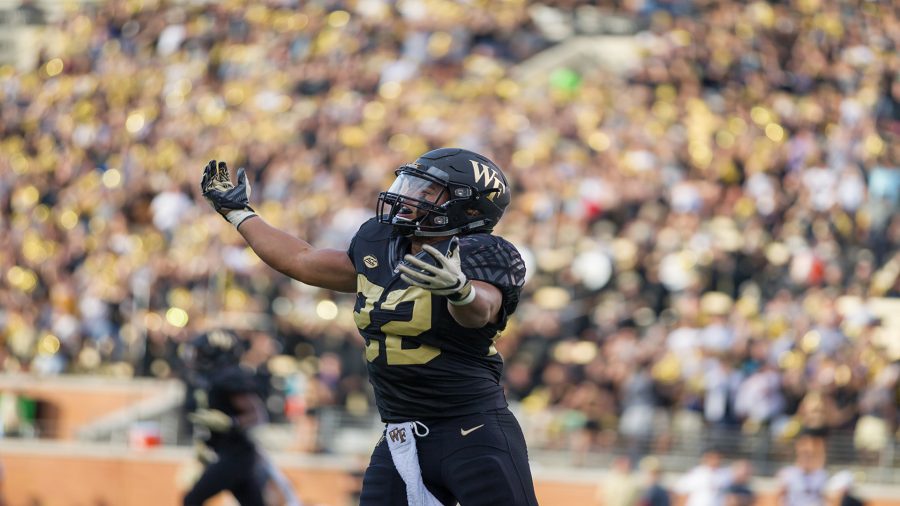 After the Wake Forest defense gave up 56 points to Notre Dame on Sept. 22 and 41 points to Boston College on Sept. 13, football coach Dave Clawson decided that a change in staffing was needed. Midday on Sept. 23, a press release revealed that Jay Sawvel, the defensive coordinator, had been fired.

Sawvel, who was hired by Wake Forest in January 2017, helped the Deacons win the Belk Bowl at Bank of America Stadium in December 2017. He came to Wake Forest from Minnesota, where he spent five seasons as the defensive-backs coach and one as defensive coordinator. At Minnesota, he led the defense to a top 25 position nationally in 2016. He also spent time at Northern Illinois, Southern Illinois and Ferris State in a full-time coaching position.

Despite Sawvel’s experience, it was clear to many that Clawson was not happy with the defensive performance of the team, as shown in his press conferences following both losses. The Boston College game saw the Deacs’ opponent gain 524 yards of total offense. Another topic of concern was that every scoring play given up was an explosive play, mostly long passes, rather than in the red zone.

“It happens over and over and over — it’s frustrating,” Clawson said. “It’s a very fundamental technique and skill that we’re not getting corrected.”

In Clawson’s press conference following the Boston College game, he made it clear that he planned to try to fix some things in practice. “It’s a problem that we have to get fixed, because we’re three weeks into it and it’s not getting better,” he said.  “It’s getting worse. That’s on me. I have to get more involved. It’s disappointing.” Clawson was true to his word and spent most of his own time with the defense during practice and defensive meetings in particular, as detailed early in the week by Les Johns of the Demon Deacon Digest.

After the Notre Dame game, Clawson expressed particular frustration given that a lot of the issues from the prior week seemed to resurface once again. “Our kids are giving us great effort, they’re playing hard, they’re working hard, they’re watching film,” he said. “I just don’t think we’re putting them in the best position right now.”

Clawson’s remarks the past two weeks, coupled with the defensive statistics, shed light on the program’s reasoning behind Sawvel’s firing. However, Clawson made it evident that he appreciated Sawvel’s work for the Deacs and had the utmost respect for him and his family.

“This was a difficult decision and not a spur of the moment decision,” Clawson said. “I want to thank Coach Sawvel for all his hard work with our football program over the last two years. Coach Sawvel is a very good person and a good football coach.”

Defensive Analyst Tom Gilmore is being promoted from his current position to a full-time coaching position. His new role will primarily work with the outside linebacker position. All of the remaining coaches will keep their current roles on staff, including Dave Cohen (Defensive Line), Brad Sherrod (Inside Linebackers), Lyle Hemphill (Safeties), and Ryan Crawford (Cornerbacks). Various defensive duties that will lack a point person will be determined in the near future.

Gilmore joined the staff at Wake Forest in the summer of 2018 after spending 14 years as the head coach at the College of Holy Cross. He was twice named the Patriot League Coach of the Year. A star defensive lineman at the University of Pennsylvania, where he is in the Hall of Fame, he earned a plethora of awards both during and following his collegiate career. He also spent time as an assistant coach at University of Pennsylvania, Columbia and Dartmouth, and was hired by Wake Forest assistant head coach Kevin Higgins for the defensive coordinator job at Lehigh. His wealth of knowledge and tenure at other competitive schools are expected to help him immensely.

Gilmore and the rest of the defensive staff look to get the defense back on track against Rice on Saturday, a game in which Wake Forest is currently favored by 24.5 points. Rice is currently sitting at 1-3, having only won against FCS team Prairie View A&M.

Following the Clemson game next week, the winners of the remaining six ACC games are essentially up in the air. No one really seems to be stepping out as a clear contender this season, and traditionally impressive teams such as Louisville and Florida State look to be struggling. With only a few games down, the Deacs still have ample time to make a successful mark on the ACC and a bowl committee.